The wild flowers here are amazing and they grow everywhere. 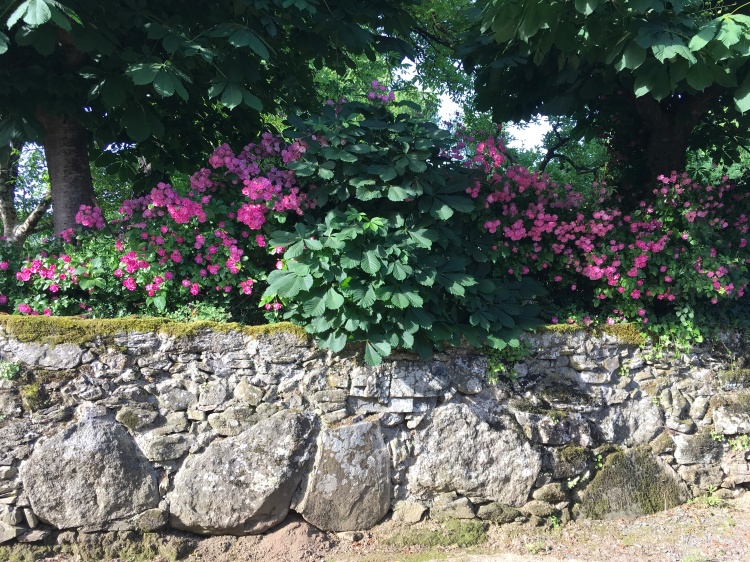 These are just some plants along the trail. Another hot day. 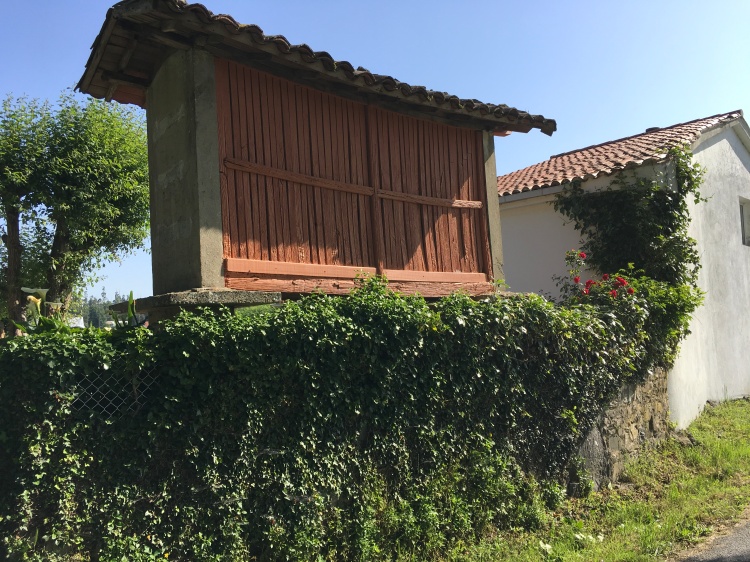 I find these grain storage units interesting. They come in all colors and sizes. Some are ornate and some are almost religious looking. It rains a lot here so I can understand why they are so high off the ground. 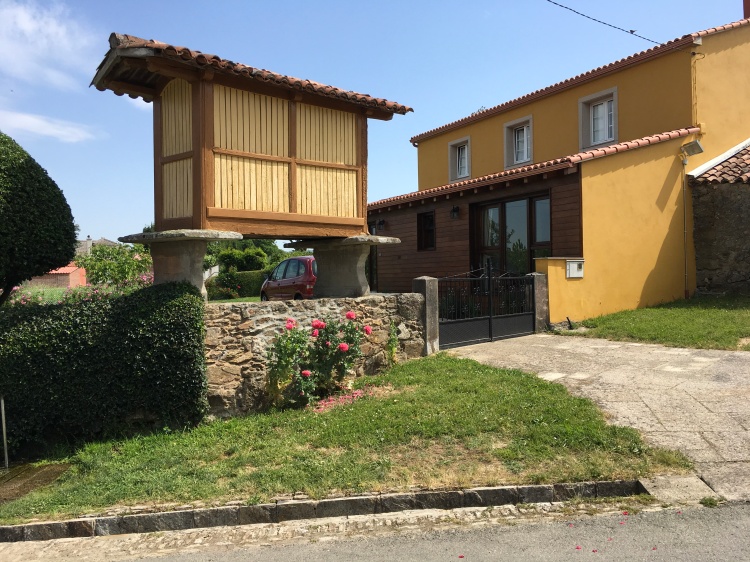 It seems like people who don’t live on farms also have these corn cribs. Maybe it’s a Galicia thing?? 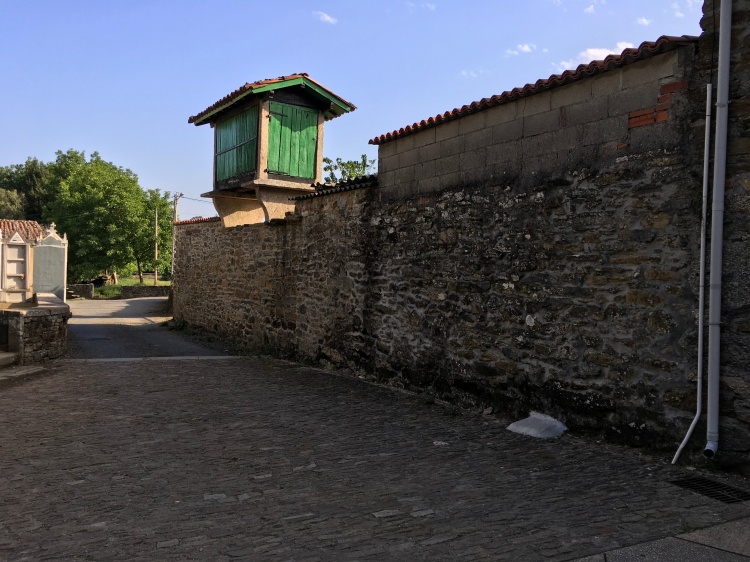 After a little more research, I was told that these units are filled with corn cobs to feed the animals and they are high to keep the mice out.

The Camino takes a turn here and there’s a beautiful tree at the corner. 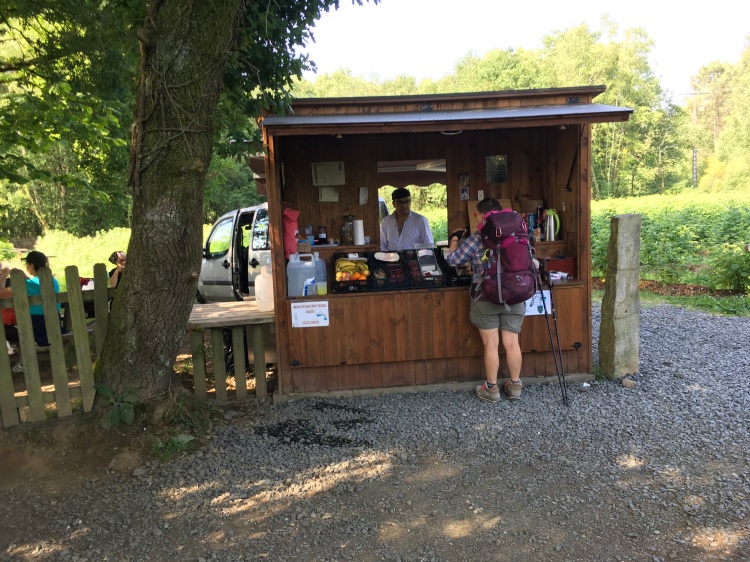 A little snack stand on the camino sells cherries, grapes, bananas, oranges, nuts  and other things. 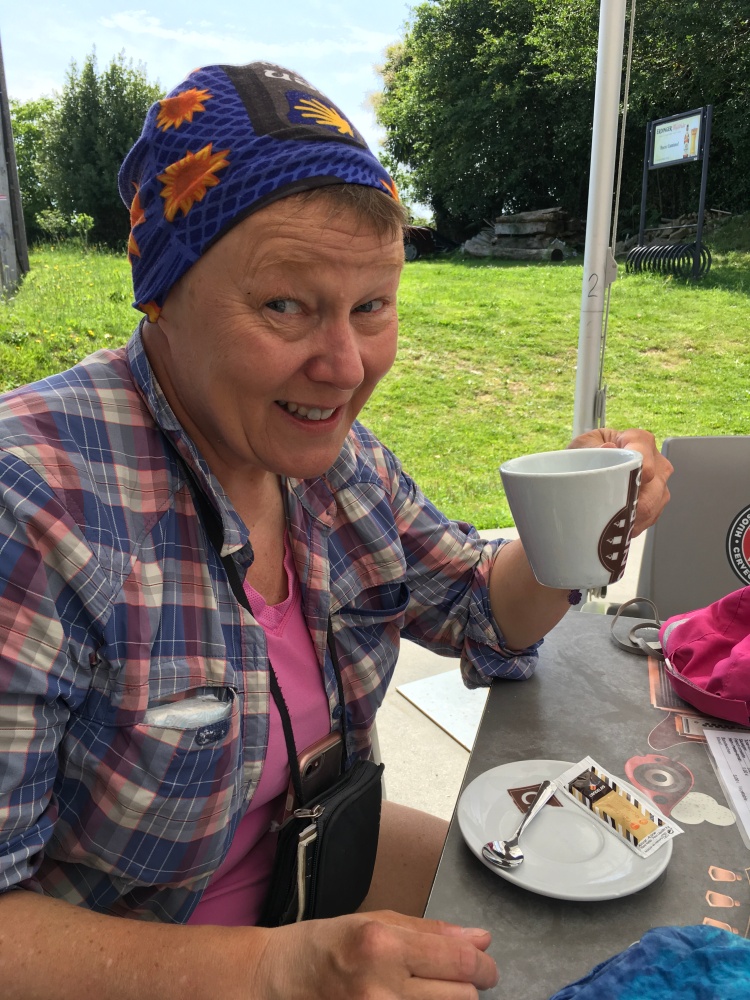 There was a German restaurant on the trail. Terry tried to order bacon & eggs from the counter by the register like we always do. The owner turned her around and told her to go sit at a table … the waitress would take her order. I asked for a Diet Coke and that was ok — I didn’t have to wait for the waitress, he just gave it to me. We sat at a table and watched the waitress clear and wipe down all the tables. Eventually she made her way over to us. We were ready to leave but wanted to use the restroom. Terry asked for a glass of water. The waitress brought her a cup of HOT water with a packet of sugar. It cost 5 cents. We couldn’t get out of there fast enough. 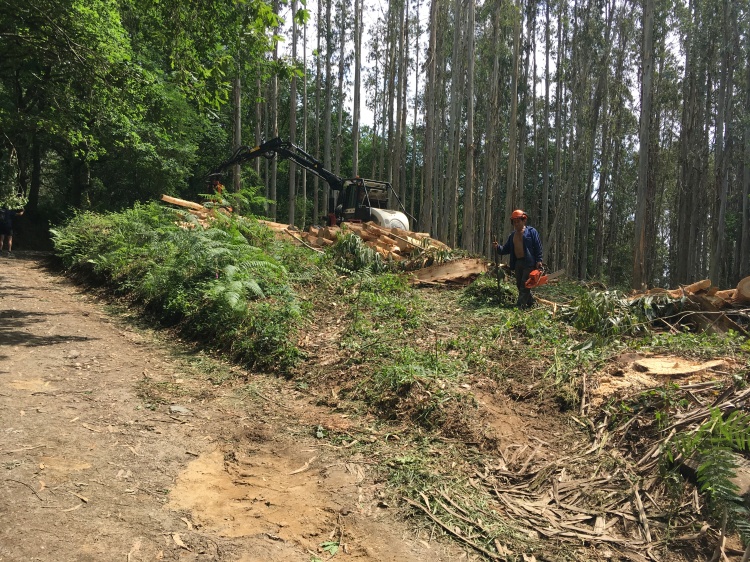 The trail led through a Eucalyptus forest. We stopped to watch them process trees. 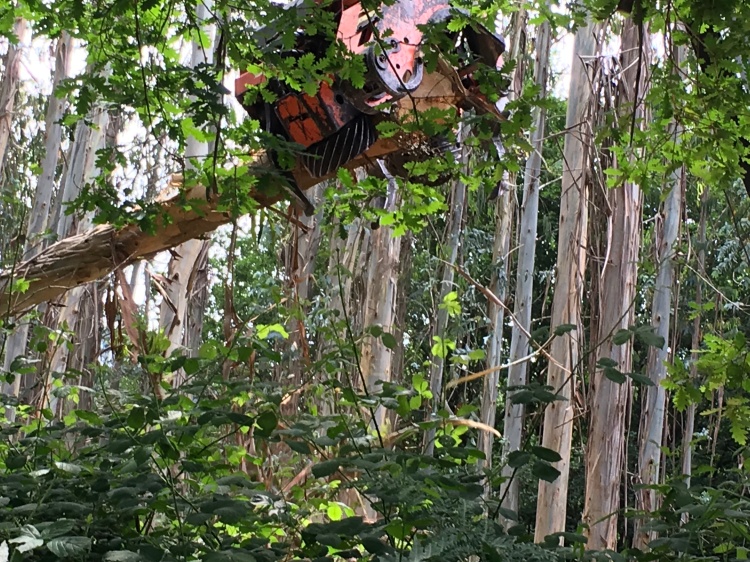 This machine was amazing. It strips the bark off and then cuts the logs to the same size. 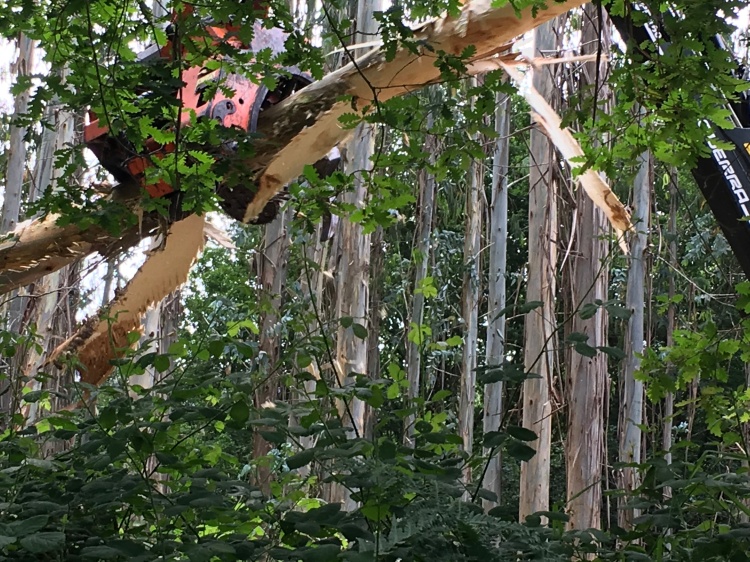 Here the bark is being stripped off. Our friends Brian and Diane from Portland wandered by as we were watching. Brian was not impressed … he’s seen the same equipment being used in Portland and northern Minnesota. Apparently, this is standard in the logging industry. 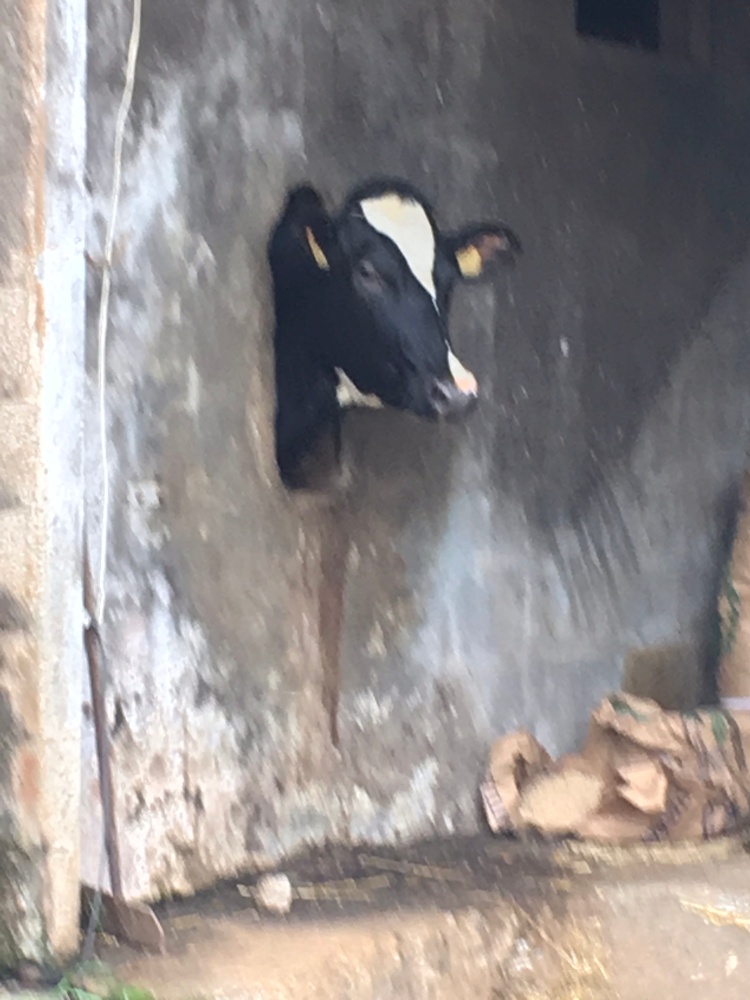 This is one of my favorite photos. This cow has its head stuck through the wall and was mooing. It reminded me of Cowntess on PeeWee Herman. I asked the farmer if I could take a photo. I called her Cowntess and he started laughing. His English was very good. He asked if we wanted to see a 2-day old newborn cow. We followed him through the dusty barn. 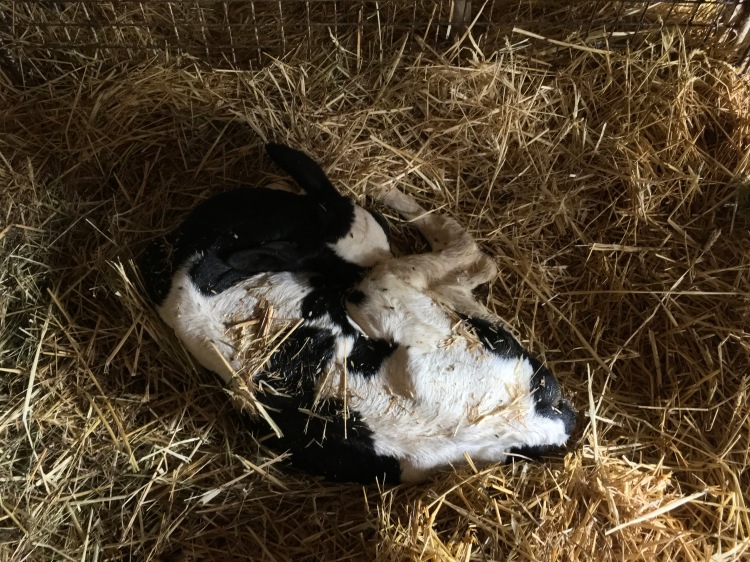 Here is the new baby Holstein which the farmer anticipates will start producing milk  in two years. 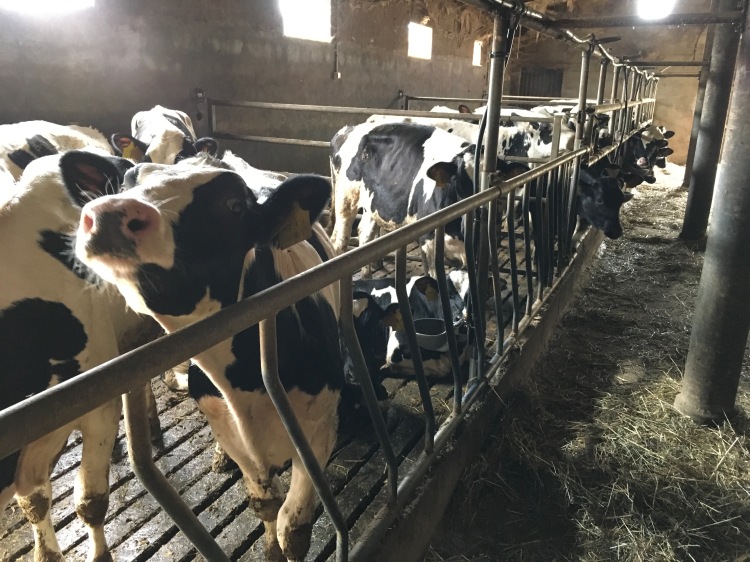 He has a total of 120 head … the family started with 30 head about 30 years ago after Spain denationalized the economy. 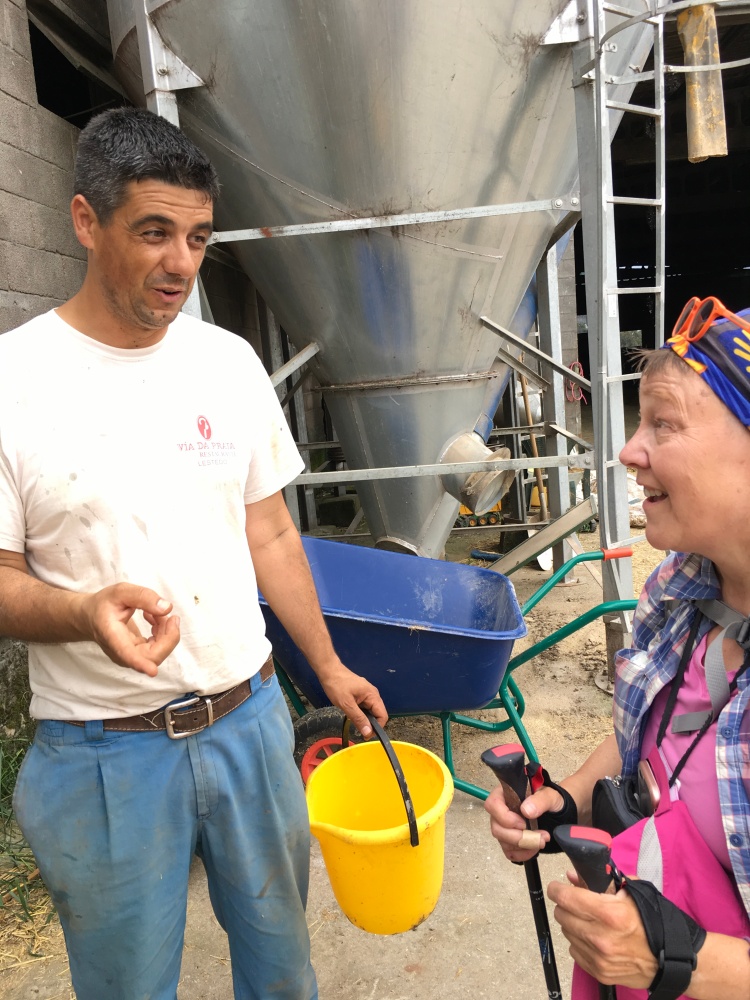 The farmer, whose name is Jose, said that this part of Spain (Galicia) is responsible for 40% of the dairy production in Spain. 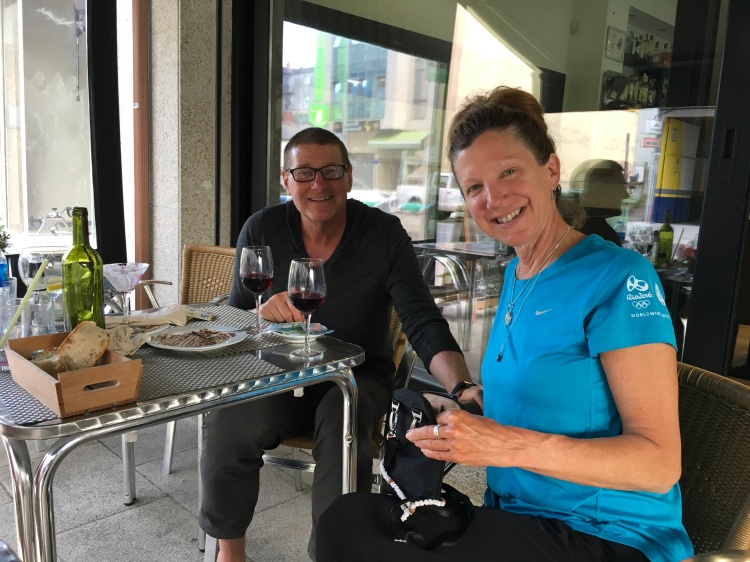 We made it to our Albergue in Arzua. Wandered down the street and met up with David and Cheryl from California. They had just done the Pilgrims meal and recommended the spring rolls which were delicious.  They were a delightful couple … we chatted for a couple hours. Have crossed paths with them a few times since. Another great day on the trail.