We had a bacon & egg breakfast at one of the local Muxia restaurants. This breakfast included a lifetime supply of bacon.

Peggy with Noelia, our helpful new friend who worked at the front desk at Muxia Mare which is owned by her family. Noelia has a younger brother named Blasé who would make an appearance every now and then. 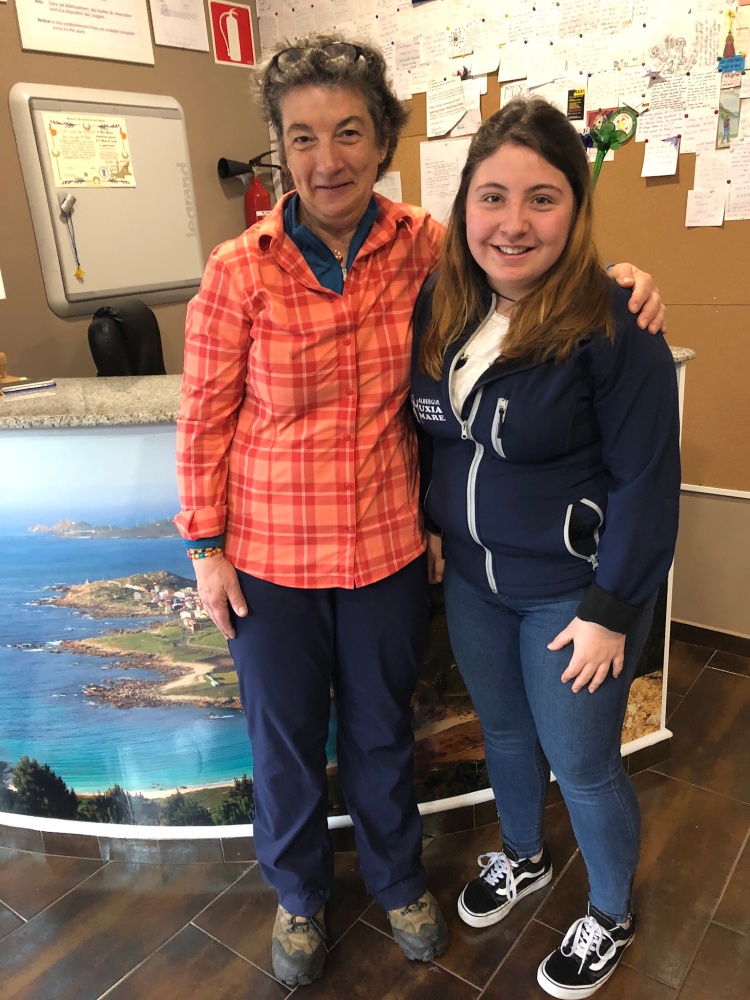 Before leaving town, we wanted to walk down to the church which has a lot of folklore. It was windy, rainy and the water was a little rough today. 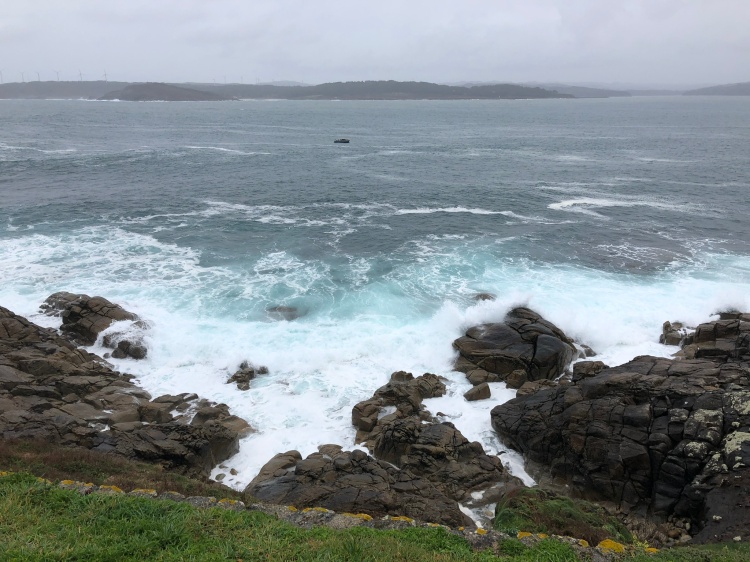 Unfortunately, like most of the churches we’ve passed, “Nosa Senora da Barca” (Our Lady of the Boat) was locked. For more information and photos about this church, scroll back to my blog post titled, “Finisterre to Muxia” from our 2017 Camino Frances adventure. 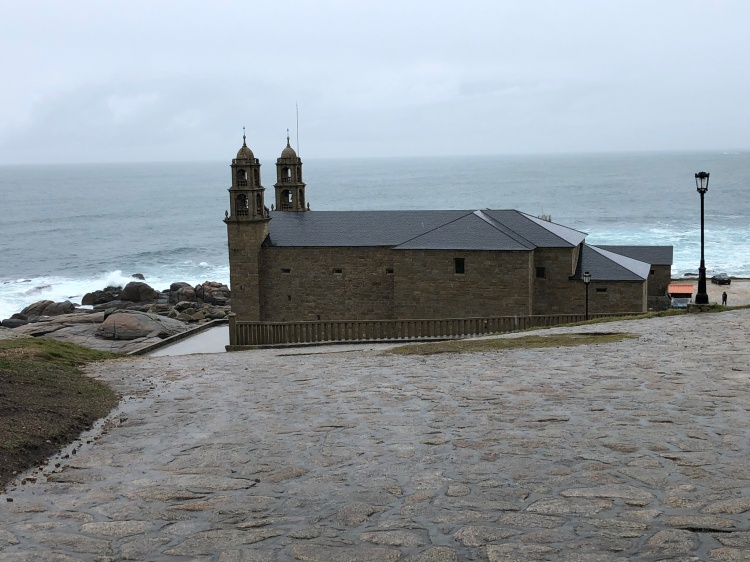 Up high on the church was a stained glass window.

Close to the church was a lighthouse.

There was also a little shop with women doing their craftwork. 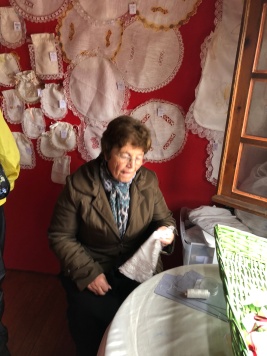 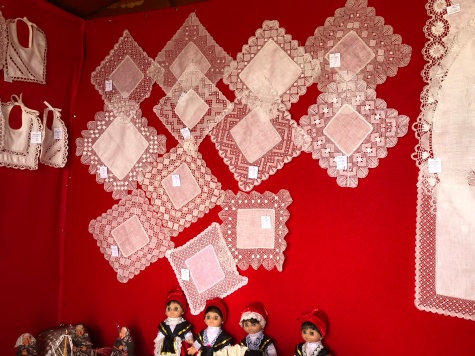 We walked back to the hotel. The route we took along the ocean reminded me a lot of Ireland and how they section off parcels of land with handmade stone fences.

A nice pathway down to the “Coasta da Morte” (Coast of Death).

Back at the Muxia Mare it was time to say goodbye to Peggy. She will be busing to Santiago this afternoon and staying at the Nest Style hostel in Santiago. Tomorrow on Saturday she flies to Madrid and then home to the United States and returns to work on Monday. 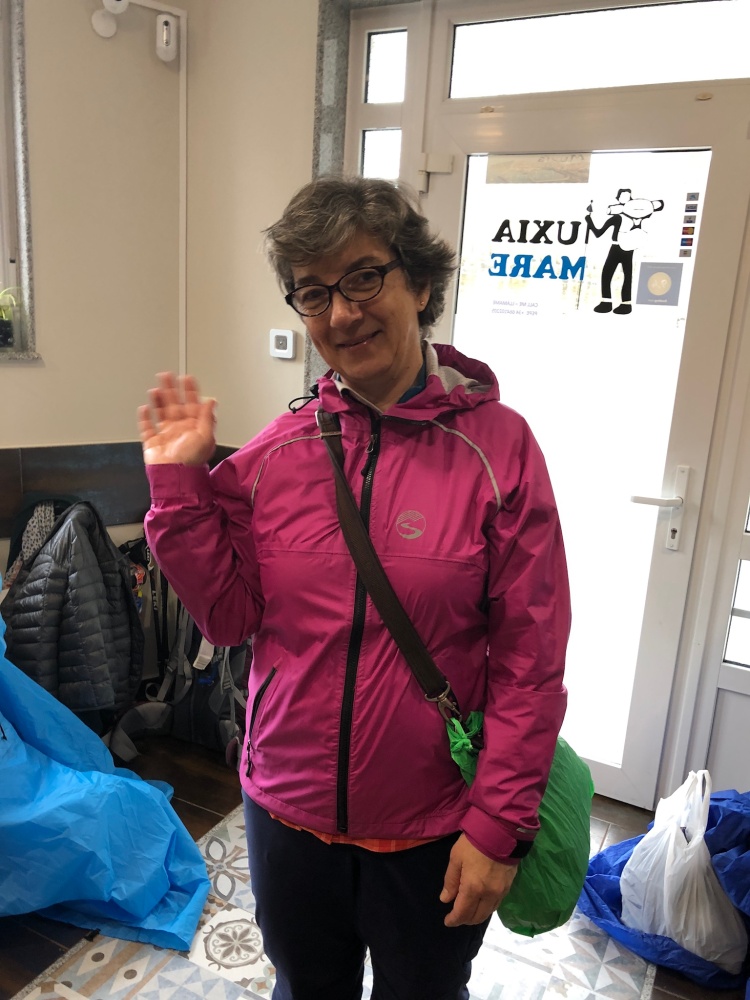 Peggy walked us to the start of our Camino route.

Muxia is a scenic little village and hard to leave.

This is where it got tricky. According to our guidebook, the directions were given for walking to Muxia from Finisterre. We were going to walk the opposite way from Muxia to Santiago. Didn’t think much of it. Today should have been a simple short walk to Quintans. However, it ended up being a long complicated mess.

We missed the first turn because it indicated an “S” in a circle pointing up a big muddy road/field which we assessed as a construction site. It wasn’t even worthy of a digital photo. We later realized the “S” stood for Santiago and it was one of our few clues to the correct direction.  We had to read all of the arrows backwards which gets really tricky on the turns. 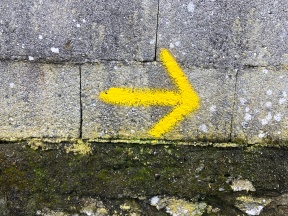 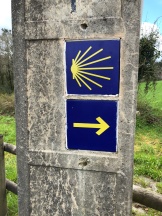 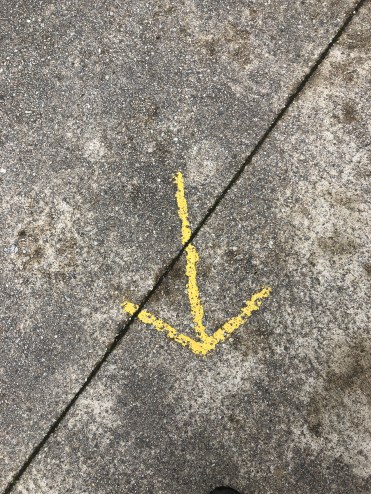 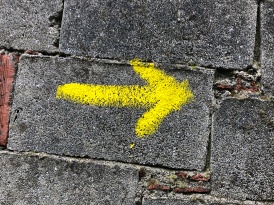 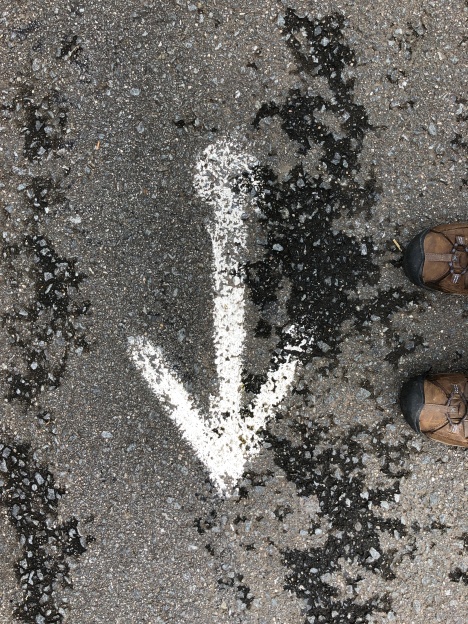 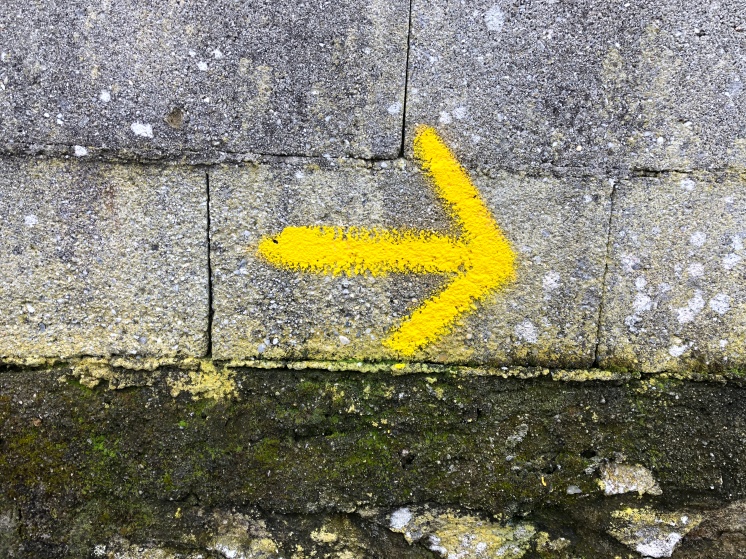 We ended up walking through a steep neighborhood and asking a few of the locals for directions. We weren’t too confident of our translation of their directions. 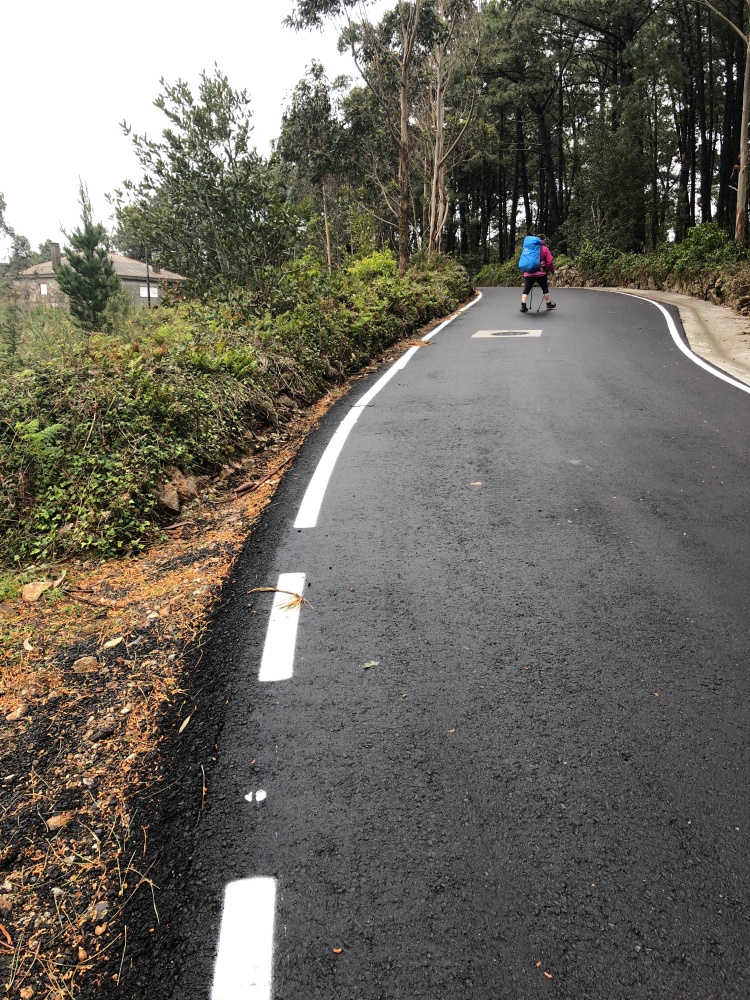 Our easy route to Quintans was mostly uphill and steep.

We passed by an old mission church that looked interesting. Like most of the other churches, it was locked tight.

Our only true confirmation was to find a Camino direction post and then go the opposite way. We did eventually find our way. The guidebook does not recommend going from Muxia to Santiago for this reason.

This is the village of Os Muinos (The Mills) a small poorly marked town. We were wandering by houses and looking for the world’s largest corn crib but turns out it was much further away.

We passed Igrexs De Se Xulian de Moraime, a 12th century Romanesque church. The original monastery was established by Benedictine monks. It no longer exists but the ancient church keeps that early connection alive. It is presently undergoing extensive rennovations. 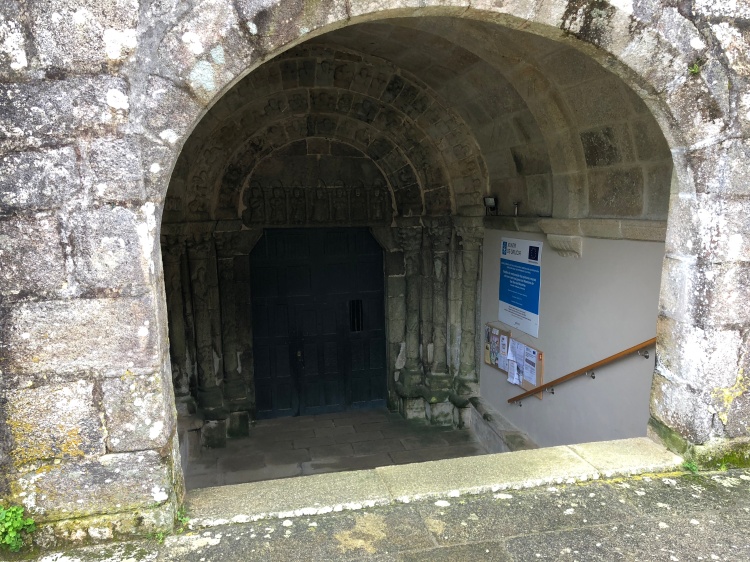 The church was locked. However, there was a small glass window in the door and I was able to take this photo of the inside.

We walked around the property. 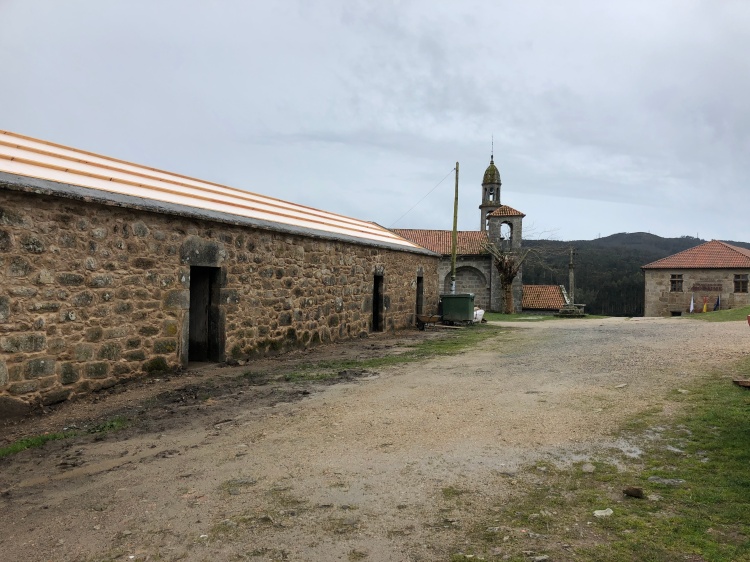 This was not a secret short cut. It was the route described from the book. 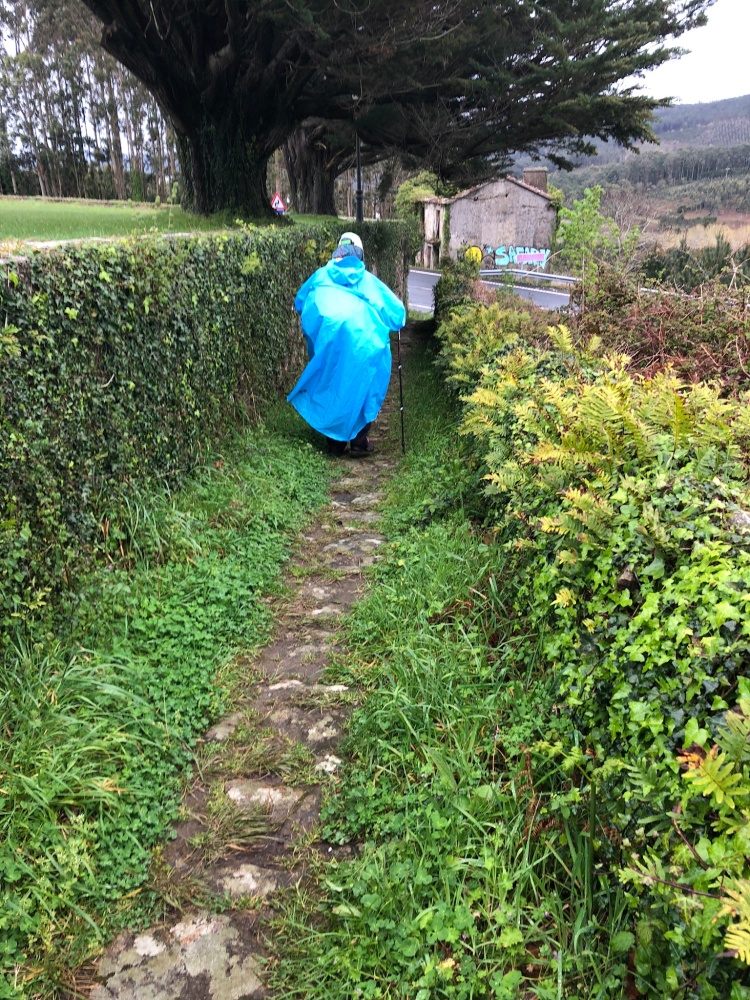 Eventually we found the church of San Martino de Ozon. We couldn’t believe it but the church was actually open. We later discovered they were getting ready for a funeral on the next day.

From the other direction, a small choir loft could be seen. 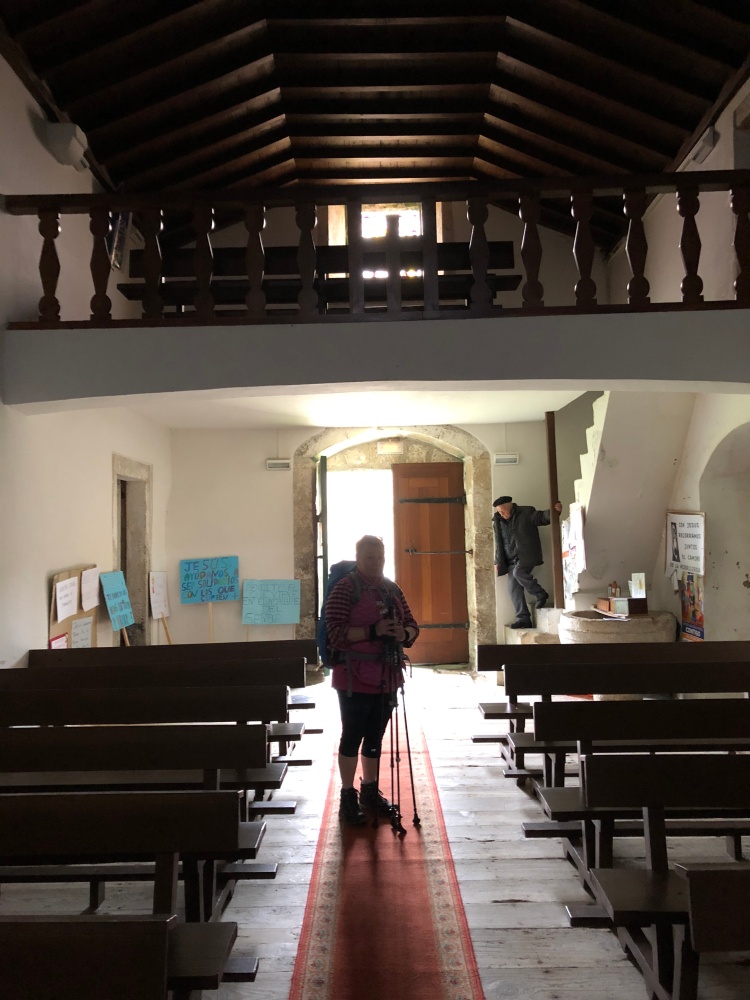 This is the corn crib we were looking for … it is Galicia’s longest granary which is called a horreos.

Back down hill toward Quintans. 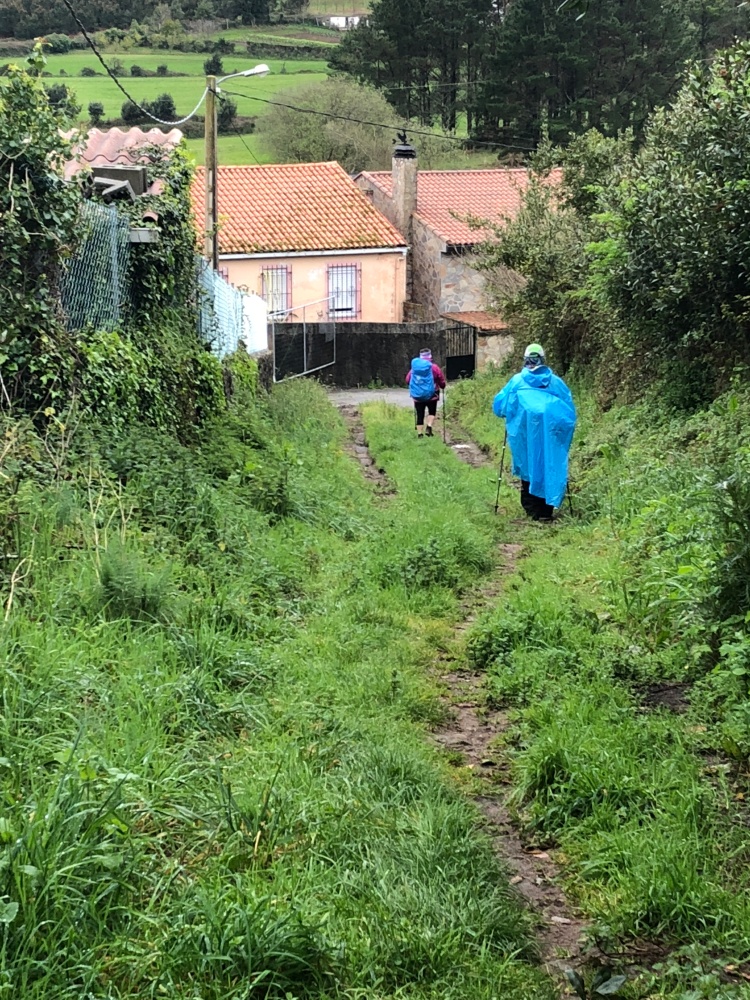 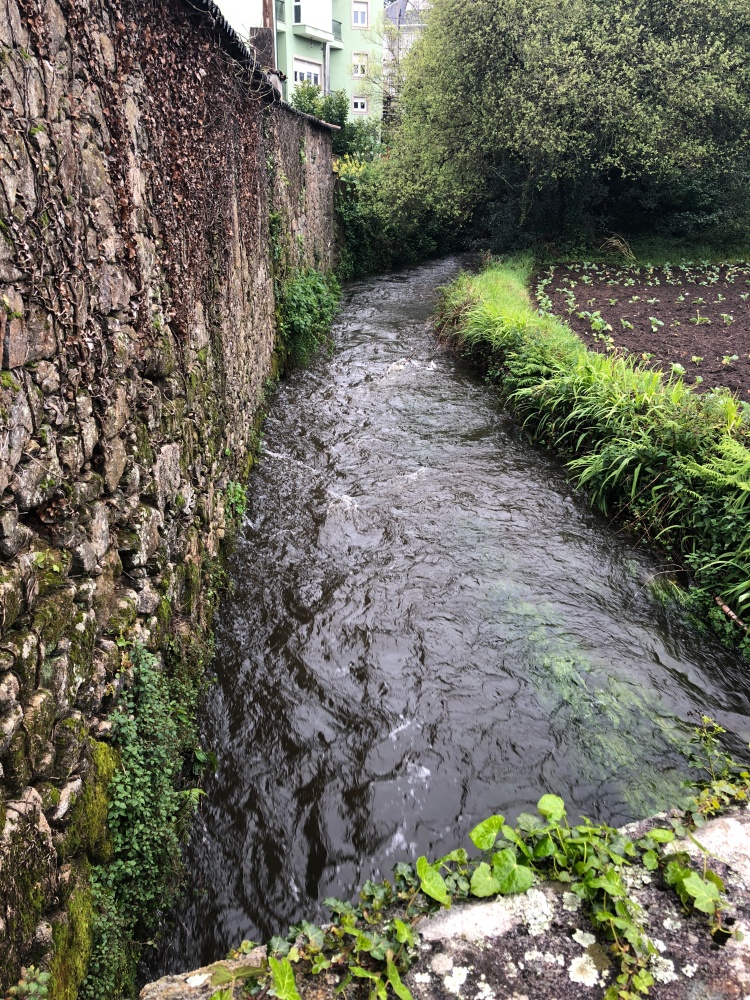 We keep walking along farmland. 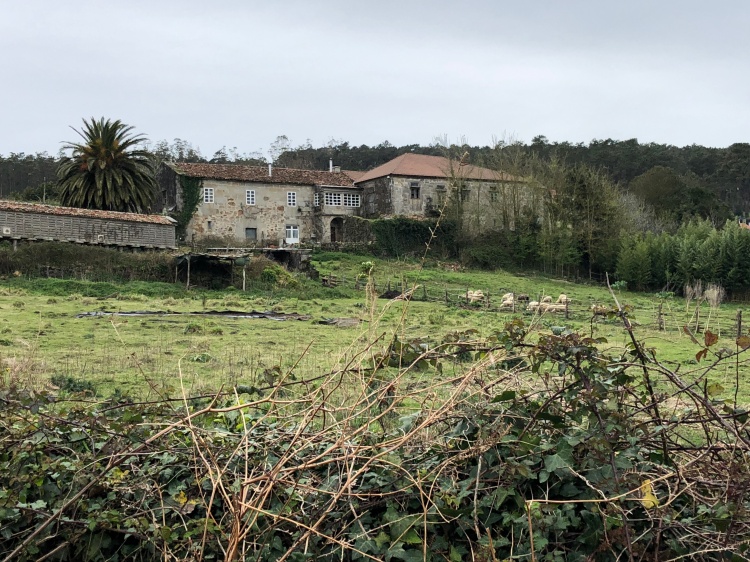 We have finally reached Quintans. 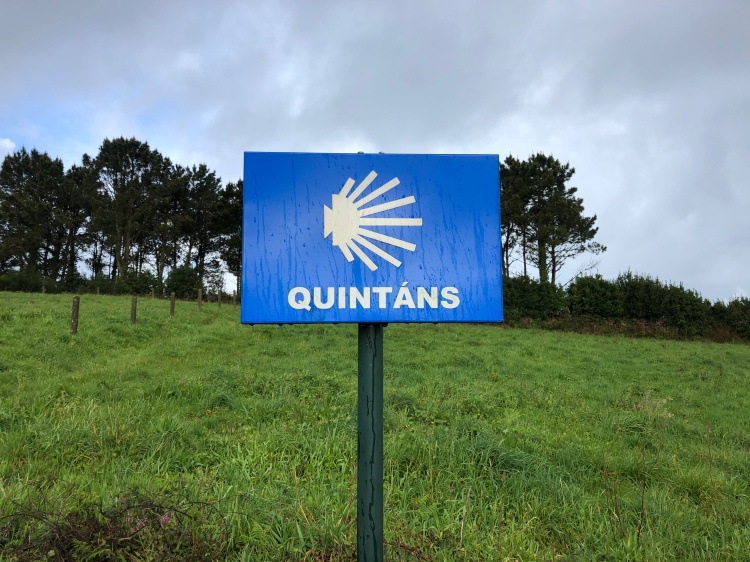 Here is where we are staying, in the Pension Plaza 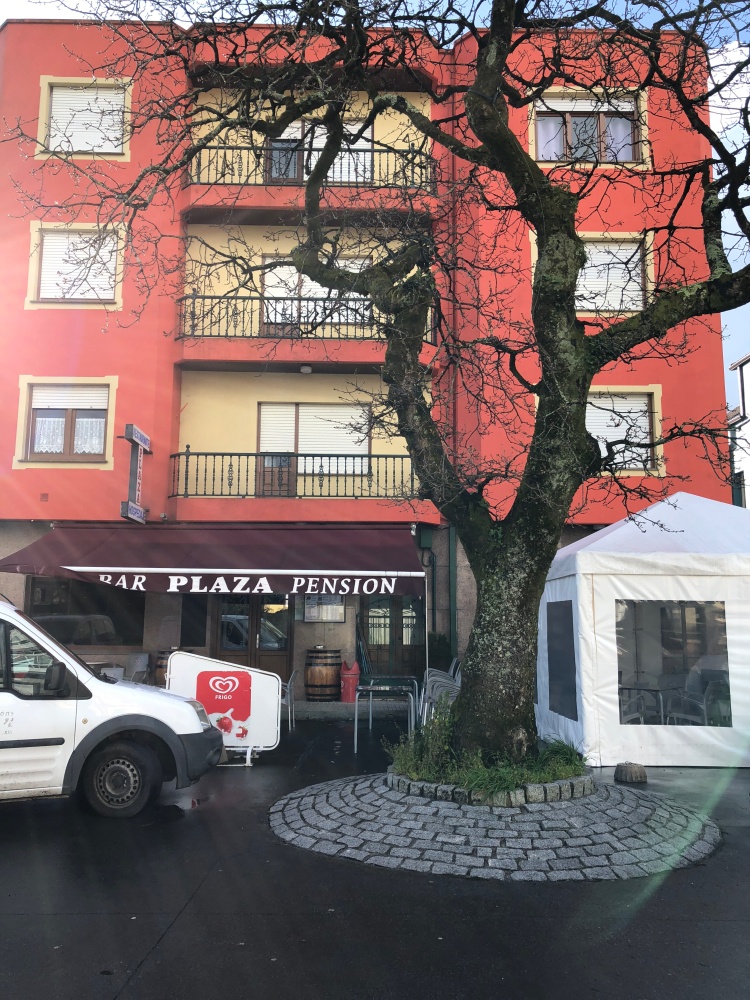 The owner took us up three flights to get to our triple room. Not fun when your tired and carrying a backpack. The room was cold. We pulled out the spare blankets. 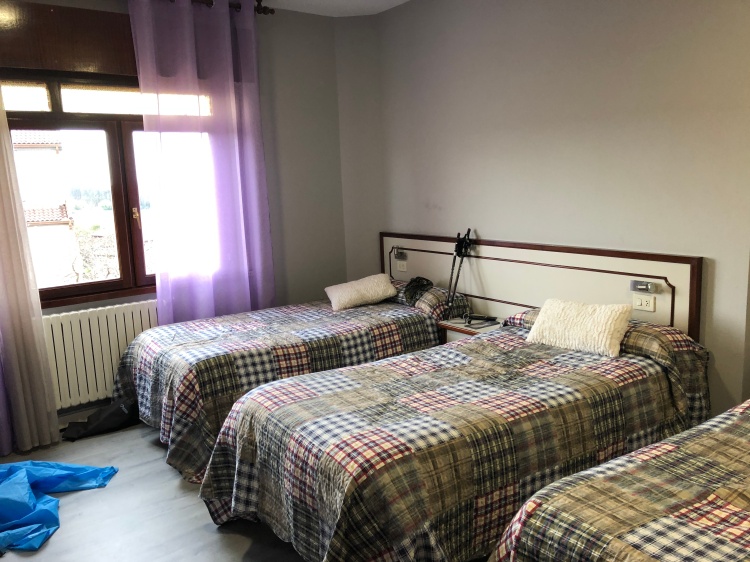 Found our way to the bar. Time to do a little blogging.

Had a few tapas too. That’s an aquarium behind us which held a giant turtle. 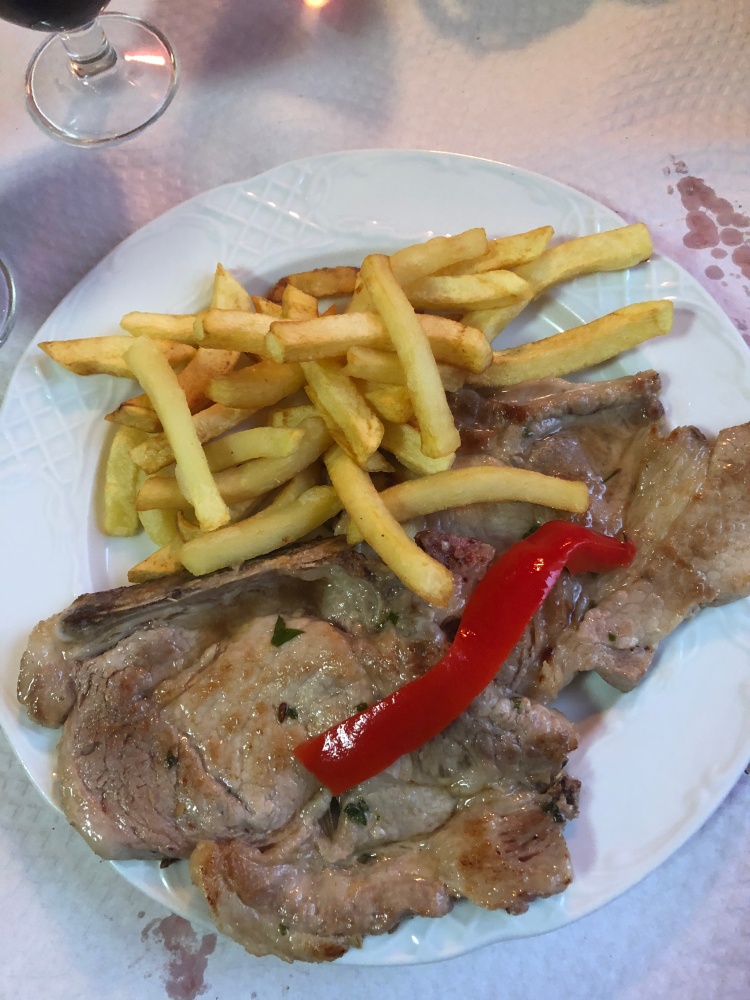 The end of another day on the trail where our quick walk turned into an all afternoon treasure hunt.

One thought on “Muxia to Quintans”