We started the day with a quick breakfast and Maria the cab driver picked us up promptly at 8:30. Since we would be staying in the Ordes Nogallas hotel, we did not need to carry full packs. Just water and snacks. It was very nice to be in the same place for three consecutive nights. 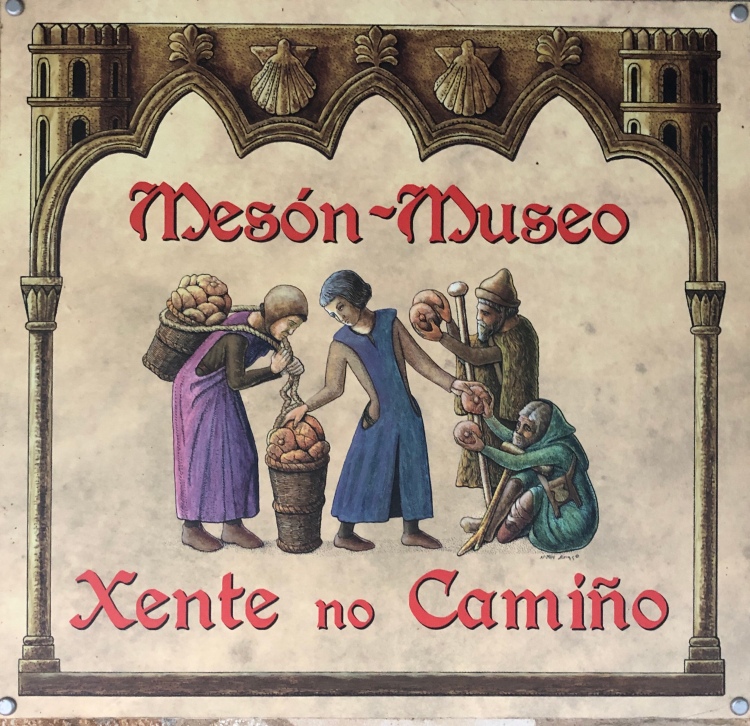 Maria brought us back to where we finished yesterday, the Mesón-Museo restaurant.

Henk and Annette from South Africa were also being shuttled around by. Maria. We all started out at Mesón-Museo. They are fast walkers and will arrive in Bruma before us. 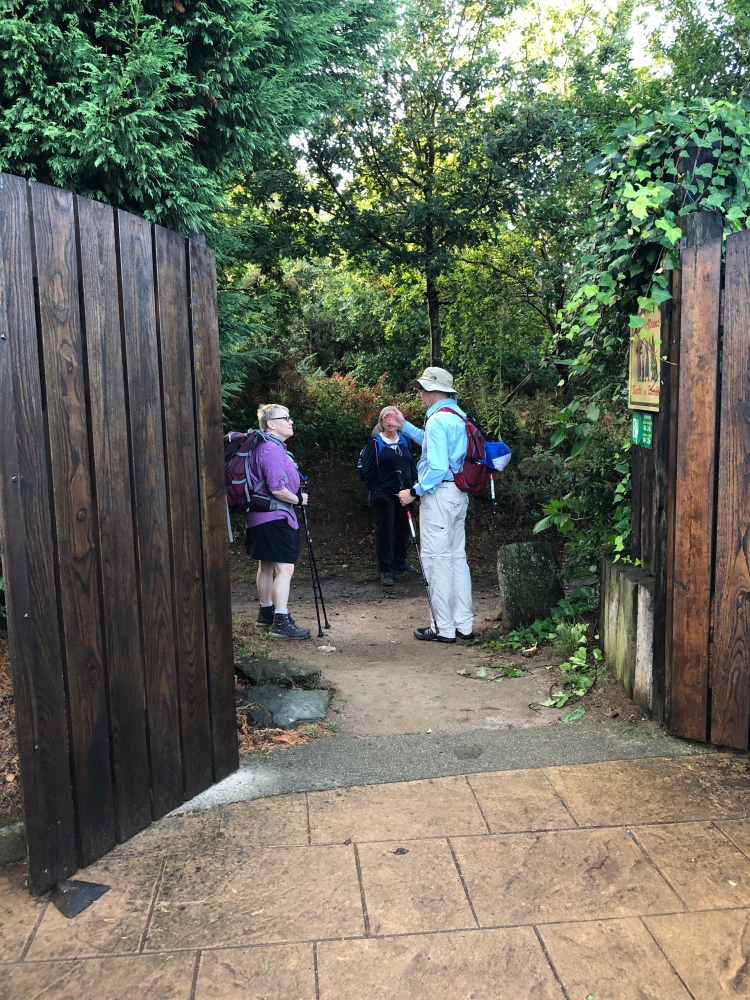 It was very convenient that we could just walk through the gate behind the Mesón-Museo restaurant and be on the Camino.

The first critter we saw today was an orange snail with eyes. There were several orange snails on the trails today.

We started with a beautiful walk through the Galician landscape. 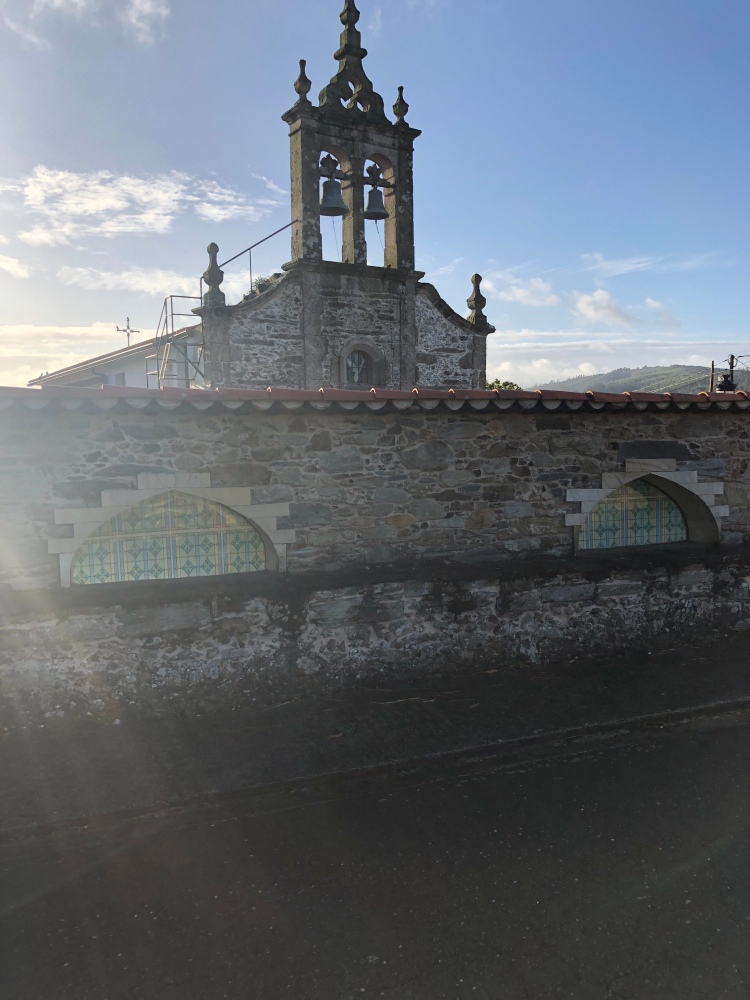 A historic wall blocks the view of Church of Santa Eulalia de Leiro.

This church has a very large cemetery attached to it. Down a flight of stairs behind the church is a small shrine and an open restroom with hot and cold running water. That’s a first.

We do stop and smell the roses and this one was a beauty. 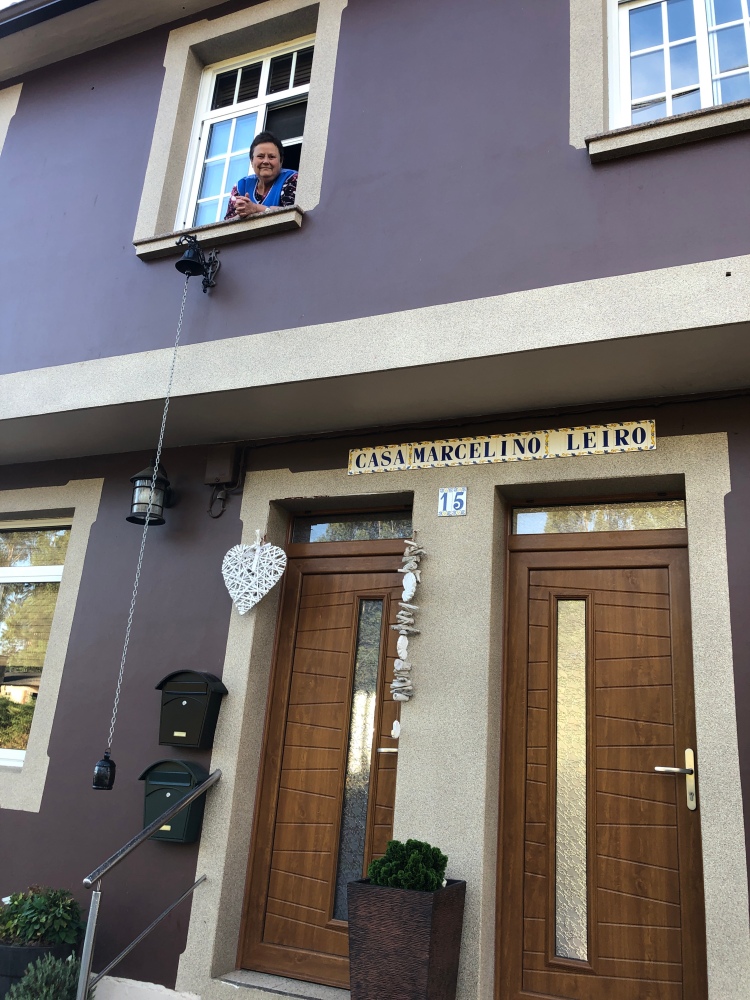 We stopped to admire this house. I was chattering about how beautiful it was. I looked up and there was a woman watching us from the window. I was startled. After a little scream and some laughter, I greeted her and asked if I could take a photo.

There was a long climb on a gravel road. At least it wasn’t a steep climb like we had been experiencing the day before. It’s always reassuring to see a Camino marker and realize you’re walking in the right direction.

Another eucalyptus forest. Lovely to smell.

We came to a parque called Encoro de Beche. It has a small reservoir and a dam in addition to restrooms with running water, hand towels, soap and toilet paper. We don’t see such good facilities very often. 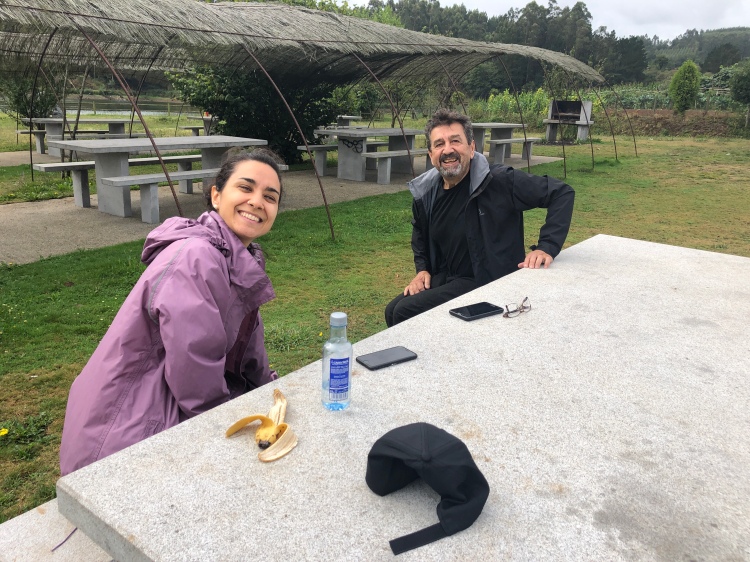 As these people came walking up to the park, I mentioned to Terry that the guy reminded me of my old friend Raul from Argentina. I started laughing when Melena told me that she and Miguel were from Buenos Aires. I told her why I was laughing.

Also stopping to rest and chat is pilgrim Juan Manuel from the Canary Islands. 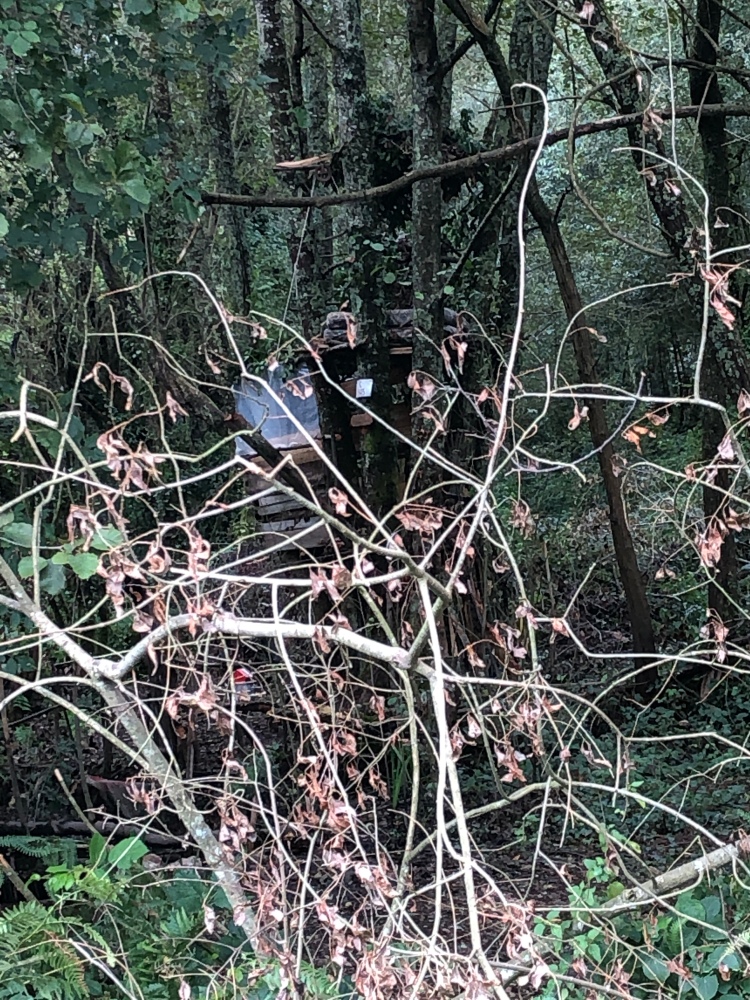 Back on the trail we see a camouflaged tree house that some one is living in.

This is an amazing flower. We haven’t seen one like it anywhere. 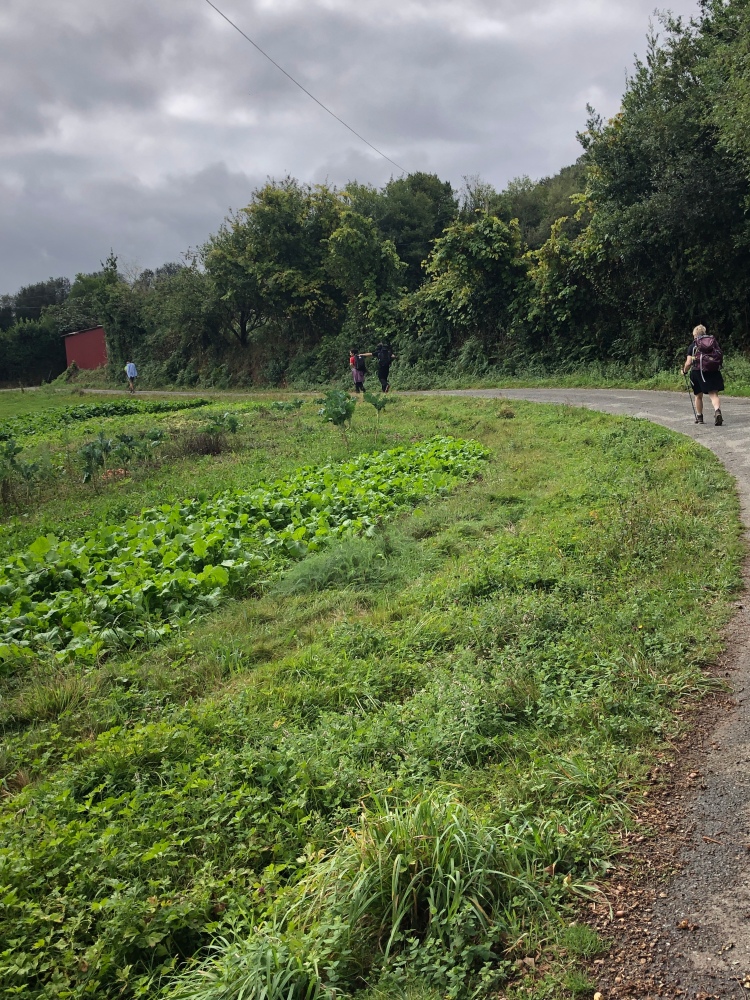 Back on the road and the climb levels out but soon becomes steep. 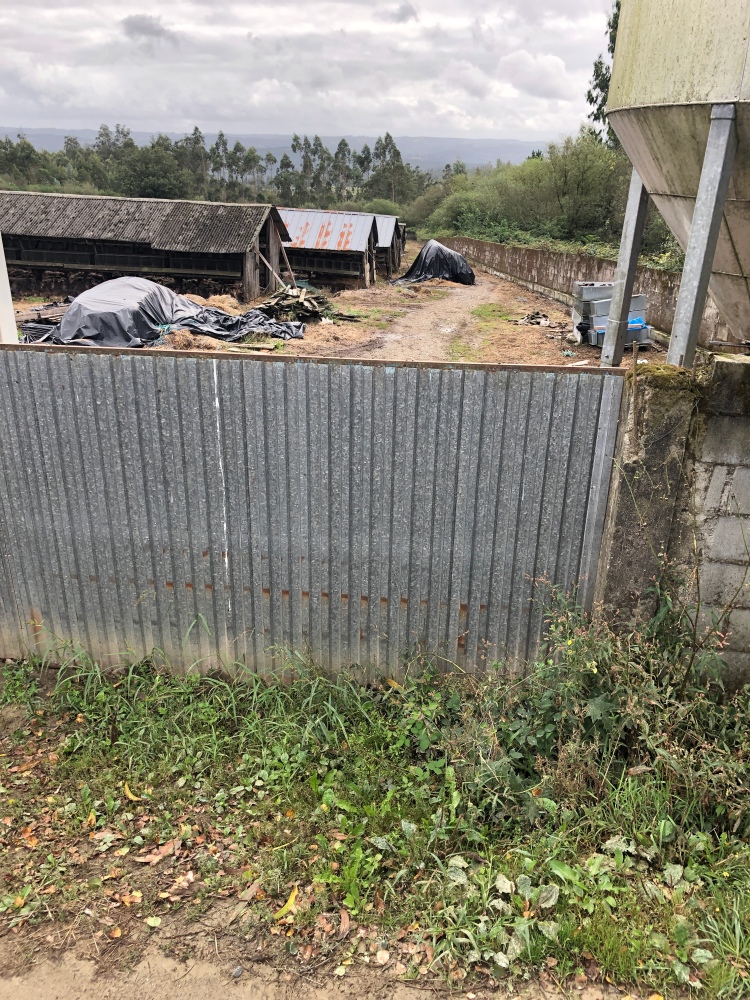 We walked the fenced circumference of what appears to have been a very large chicken farm. No chickens in sight here.

A wonderful view from the top — there’s a village but it’s hard to see in this photo. 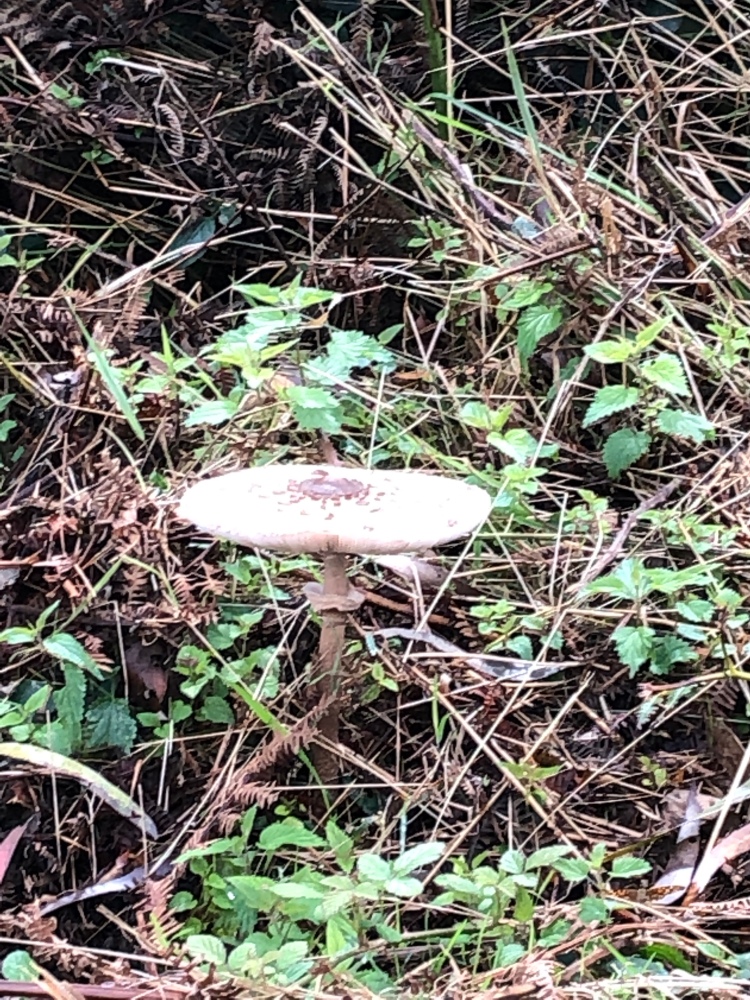 If you like mushrooms, Ordes is the place to be. They hold the Festa do Champinon (mushroom festival) during the last weekend of April. 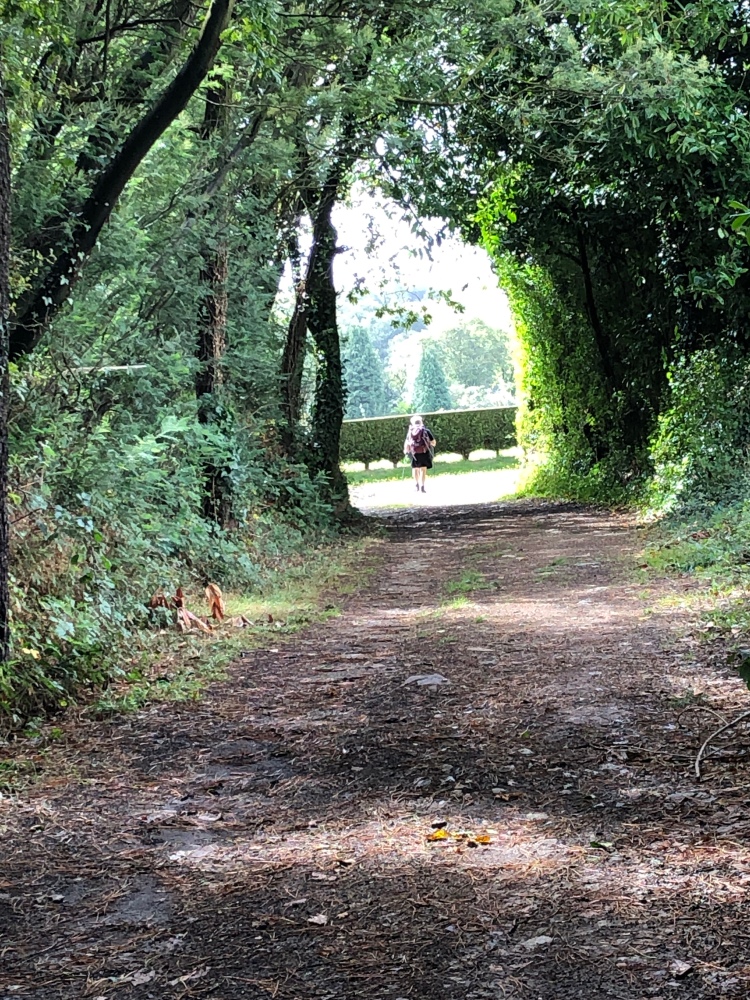 Coming out of the woods and entering the outskirts of the village of Bruma.

A rooster and a few hens in a yard as we get closer to our Bruma destination. 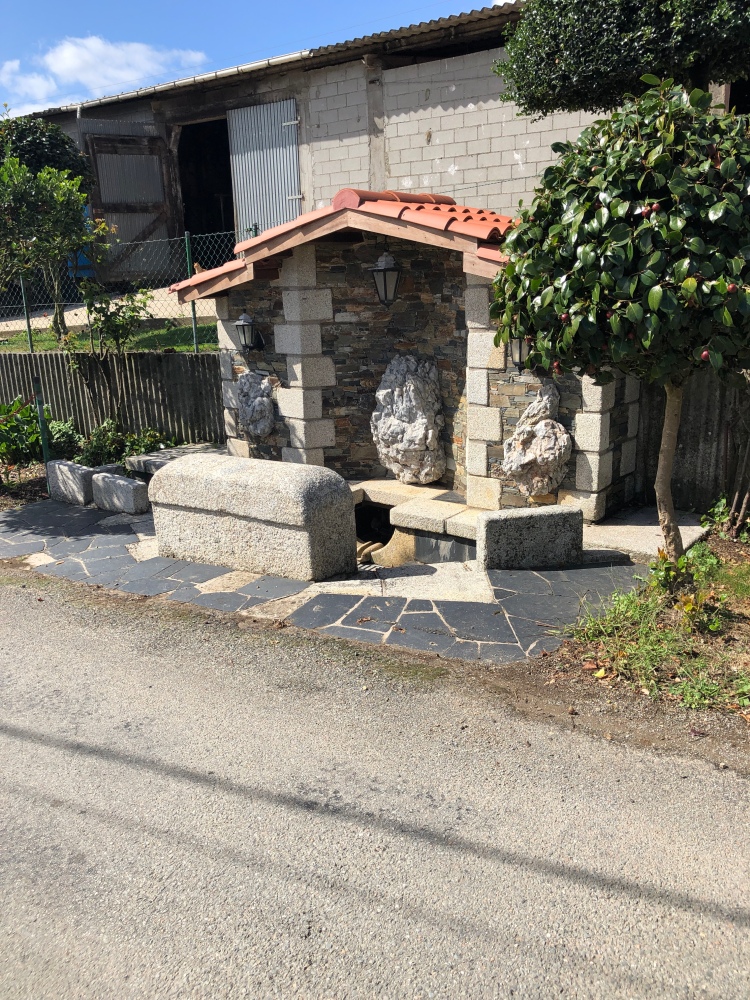 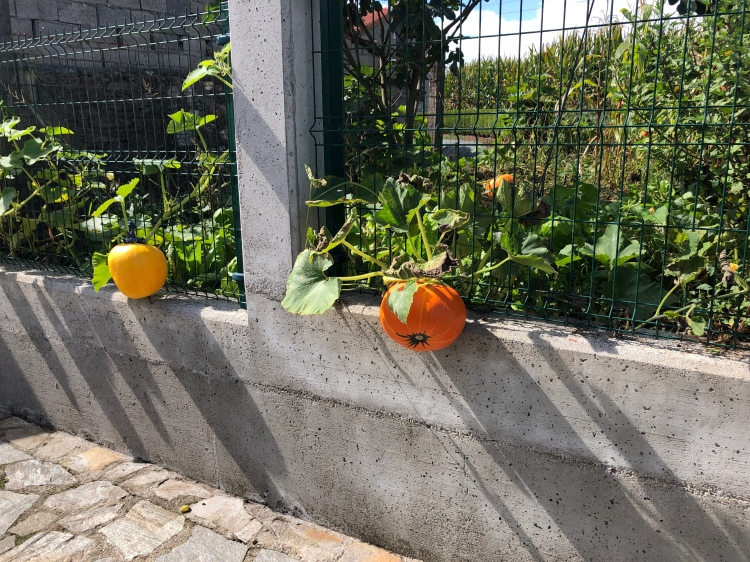 The little village is in sight. Perfect pumpkins growing through the fence.

Next to the Bruma albuergue is a small stream that runs through the town. 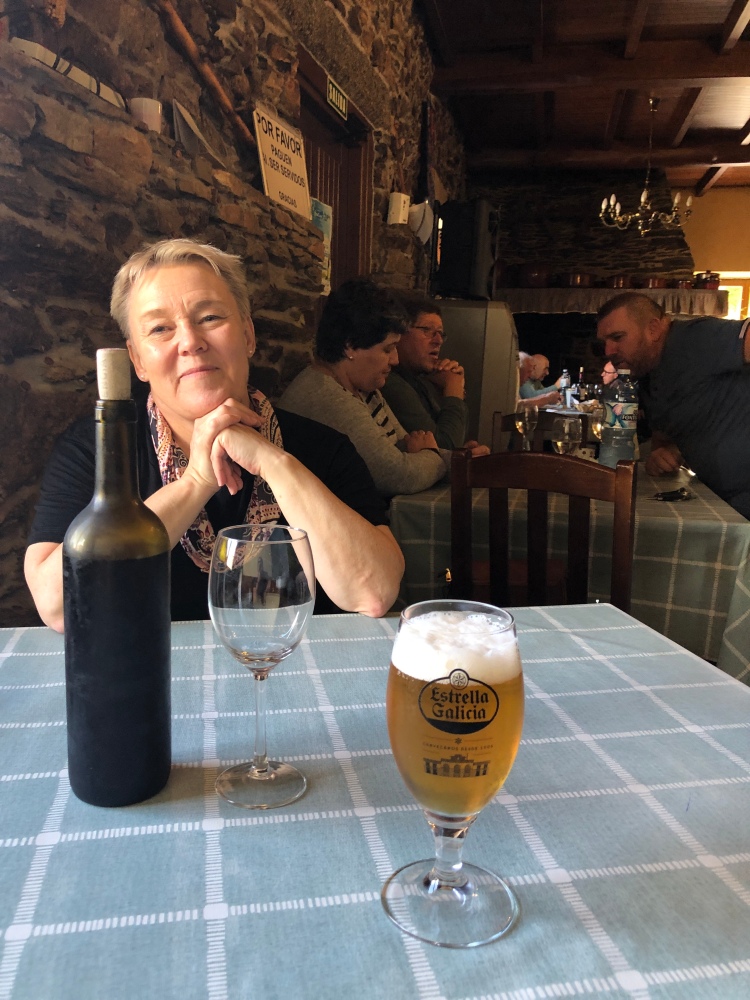 Finally we have made it to Bruma and stop at the Casa Grana restaurant. Henk and Annette had been there for hours and had finished lunch. They were going to get a head start on the next day’s miles and walk a few kilometers. They asked us to pick them up on our cab ride back to Ordes and the Nogallas hotel which is where they too were staying tonight. 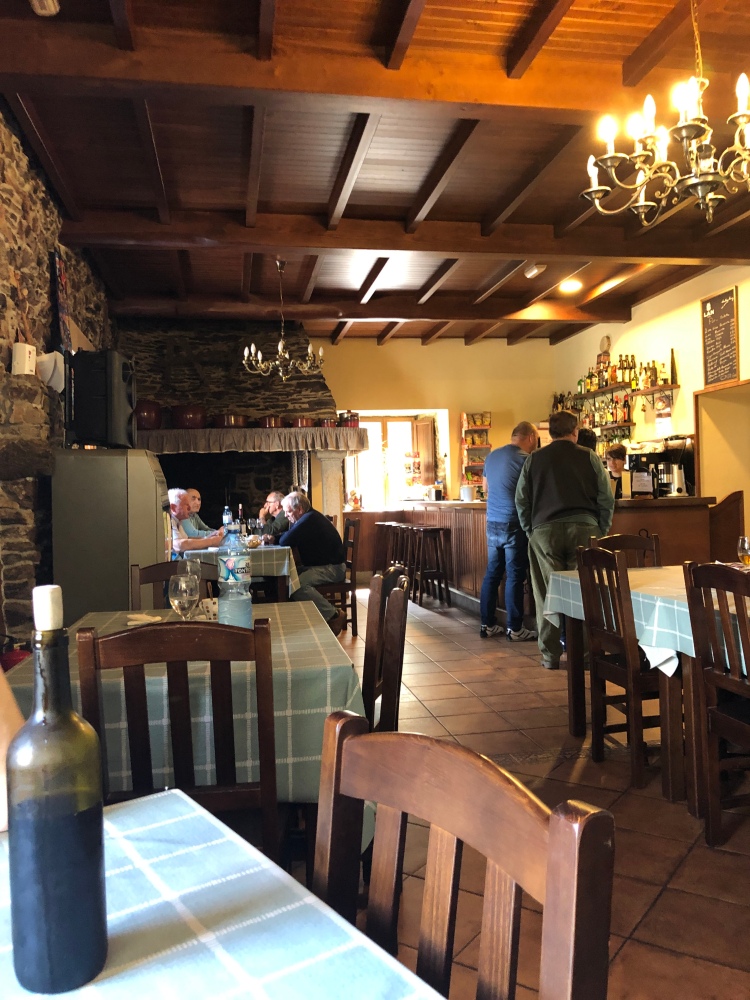 Casa Grana was an interesting restaurant with a big hearth shown in the upper left corner of the photo. The lunch crowd was just starting to clear out. Having just finished a strenuous 10 mile day, we opted for the pilgrim’s lunch which started with salad mixta. Terry had the chicken and I had pork. The bartender was kind enough to call Maria our cab driver for us. We did find and pick up Henk and Annette on our way out of town.

Next to the restaurant was an old church. We couldn’t find a name or any markings. This was our end stop for today and our starting place for tomorrow.

We were back in Ordes at the Nogallas hotel where we connected with Henk and Annette. We all went to the Verde Galicia Pulperia which specializes in Octopus. It is across from our hotel. Wine was served in these funny little cups. I was the only one with a wine glass and beer was served in it.

Iberico ham is one of the delicacies of Spain and it is found everywhere. It is sliced very thin and often served as a tapa with a slice or two of bread.

Interesting stonework on the entrance of Verde Galicia Pulperia.

Artwork on the entrance wall to the Pulperia. Combination of corks and moss and plants.

We ended the day with a gelato-like sorbet.

3 thoughts on “Presedo to Bruma”