• First Pilgrim to Arrive at the Albuergue was from Malaga Spain. Most pilgrims start in Palais de Rey which is 20K (about 18 miles). Those arriving around 1:00 pm are fast walkers or else they leave early in the morning when it is dark. 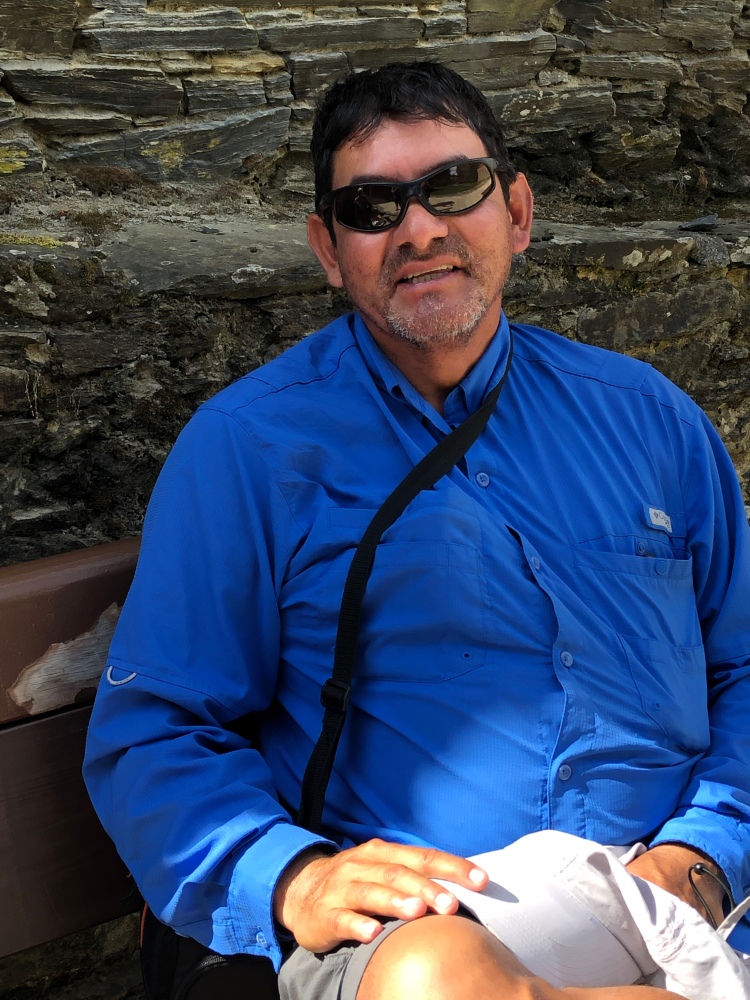 • Pilgrim of the Day: Diego who originally came from Columbia but is now living in Florida. He is retired from the United States military. This man spent a lot of time on Terry’s therapy bench. A while back he lost everything in a hurricane and said the services offered by FEMA were fabulous and exceeded his expectations. He and his wife live a fairly simple life so it was easy to get back on his feet again with the help from FEMA. We are guessing that it was probably a few presidents ago. Over the years he has walked four caminos: the Primativo, Norte and Frances twice. 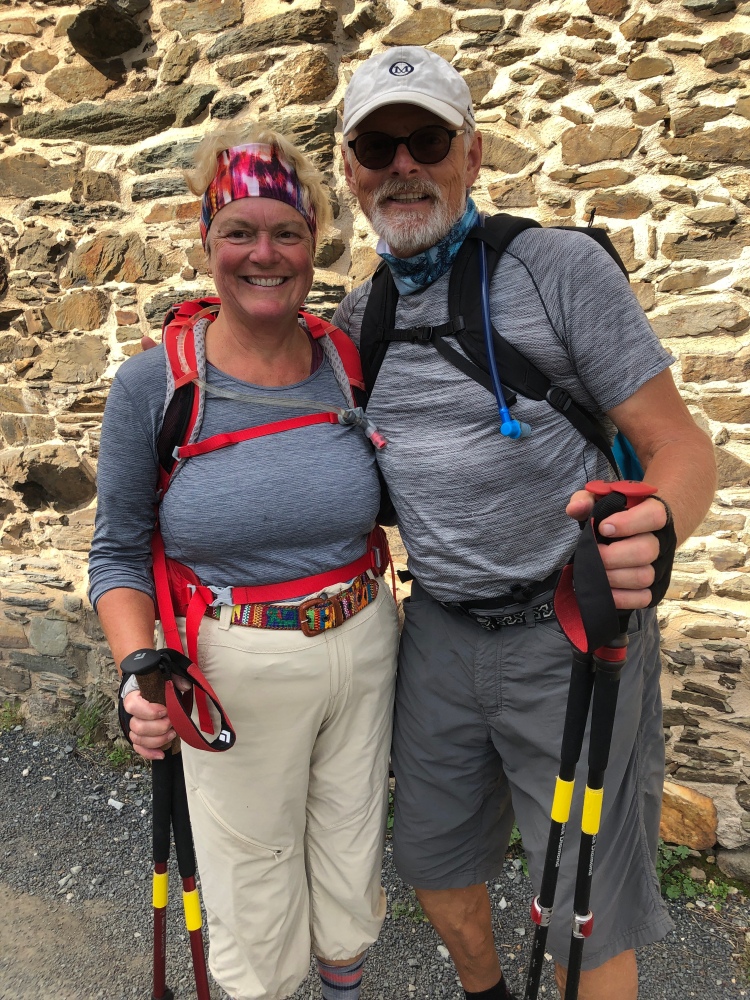 Cutest Couple: Viva and John from Canada. To celebrate their 40th wedding anniversary they are walking Camino Frances in 40 days.

Lovable Local: Ana is one of the Albuerguesa’s at our albuergue and she lives nearby. She is very professional and always has a smile on her face. I’m sure if we spoke better Spanish, there would be a lot we could talk about. We do manage to communicate and laugh at things but it is challenging. 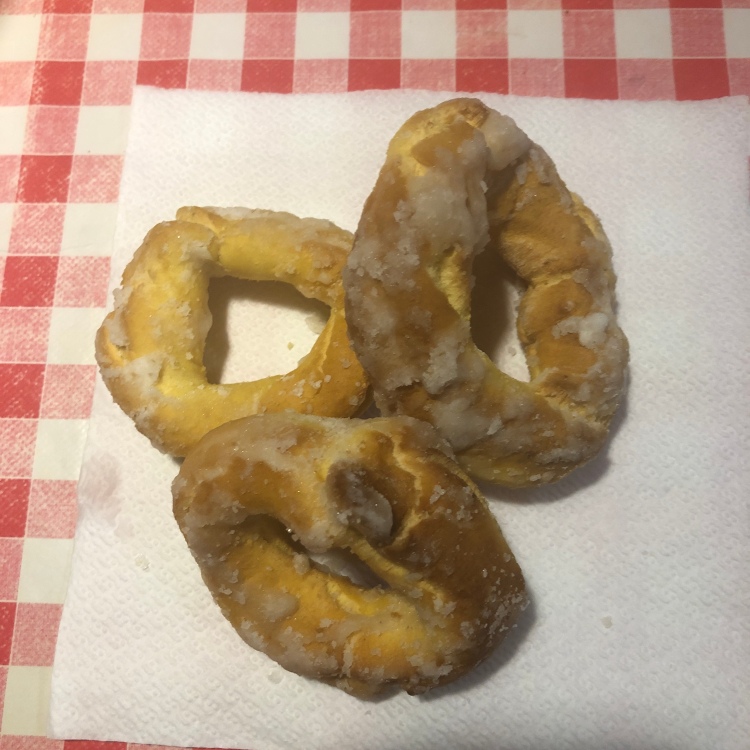 Word of the Day: Rosquillas pronounced Ohs-Key-Yas. They are Spanish doughnuts. At first I thought these were some kind of cookie. They kind of have a shortbread texture with a light glaze. I did not know what these were when I first bought a bag from some people selling them at a table outside of a church near A Calle. That should have been a clue. At home, churches usually serve donuts after services. Nope, I just assumed they were cookies. The second time, I found them at an outdoor market in Azura. 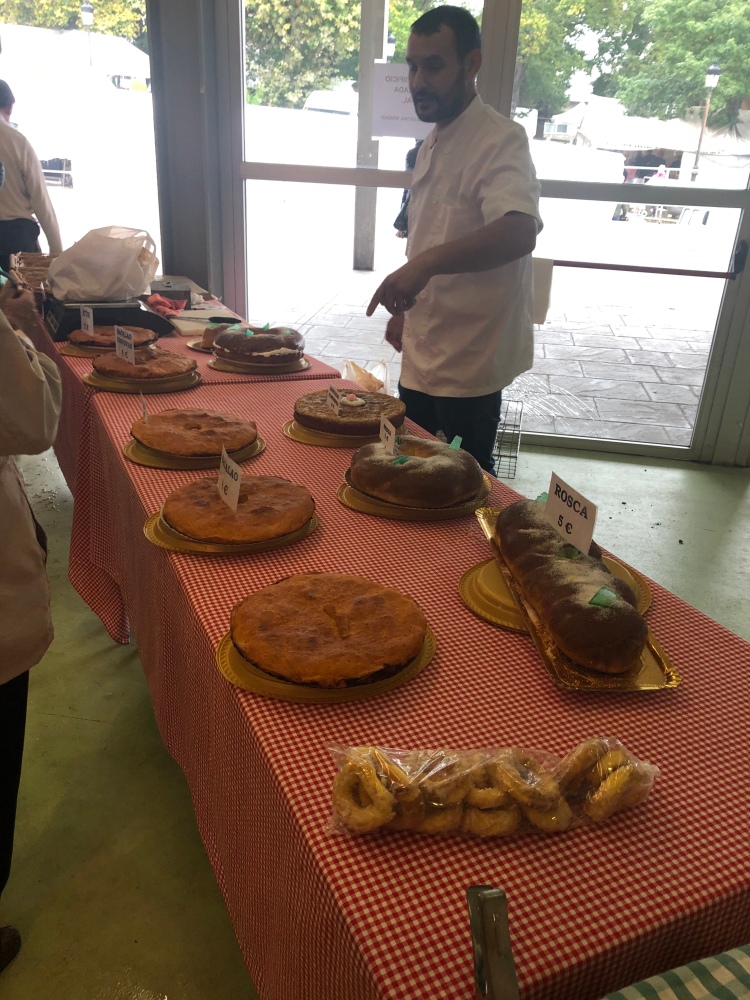 After finding Rosquillas at an outdoor market in Azura, I finally looked up the word and was somewhat surprised to discover that I had been eating doughnuts … something I would normally pass up at home.

Saturday is a slow Day at the Albuergue. Most people arrive to start their camino in Sarria or further out on a Friday, Saturday or Sunday. Those starting in Sarria will reach Ribadiso on Monday, Tuesday or Wednesday. Also, the weather is starting to feel a little cooler here. More cloudy mornings with light rain. It’s the beginning of fall and the lighter season on Camino with not as many walkers. 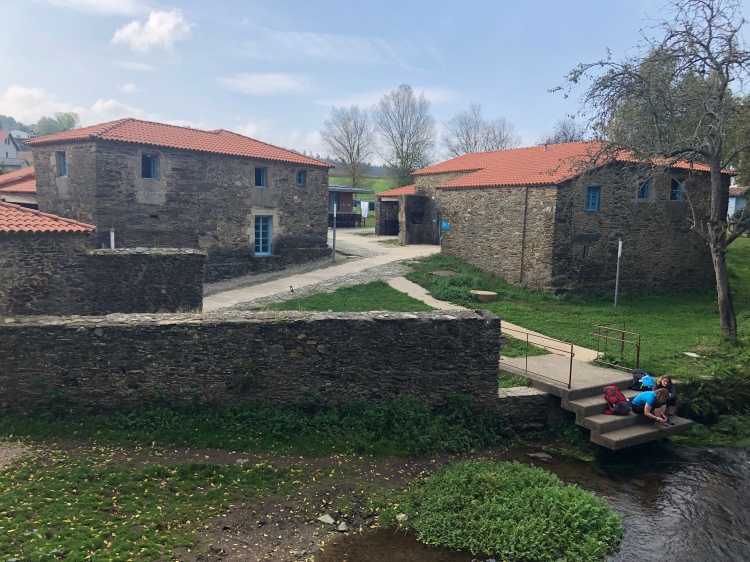 The albuergue is usually bustling with energy but now with cooler weather and rain, it is beginning to slow down a bit. 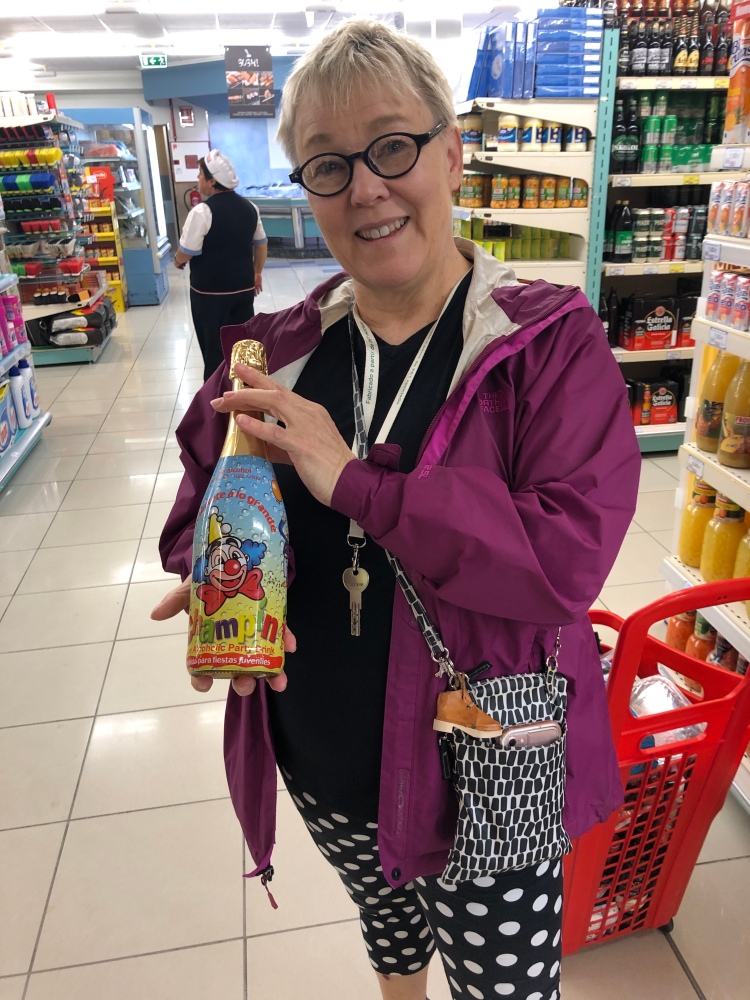 Terry and I went into Azura to grocery shop today. At the Froize grocery store we noticed that they sell alcohol-free Clown champagne. 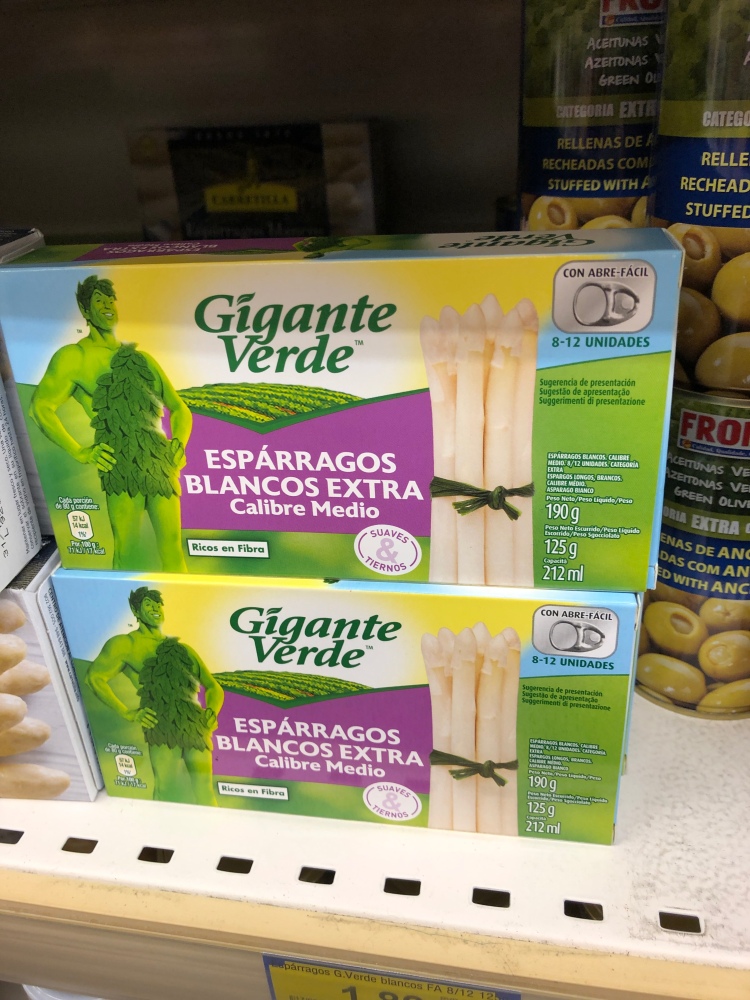 And here is a local favorite, the Gigante Verde with white asparagus which is next to impossible to find at home. 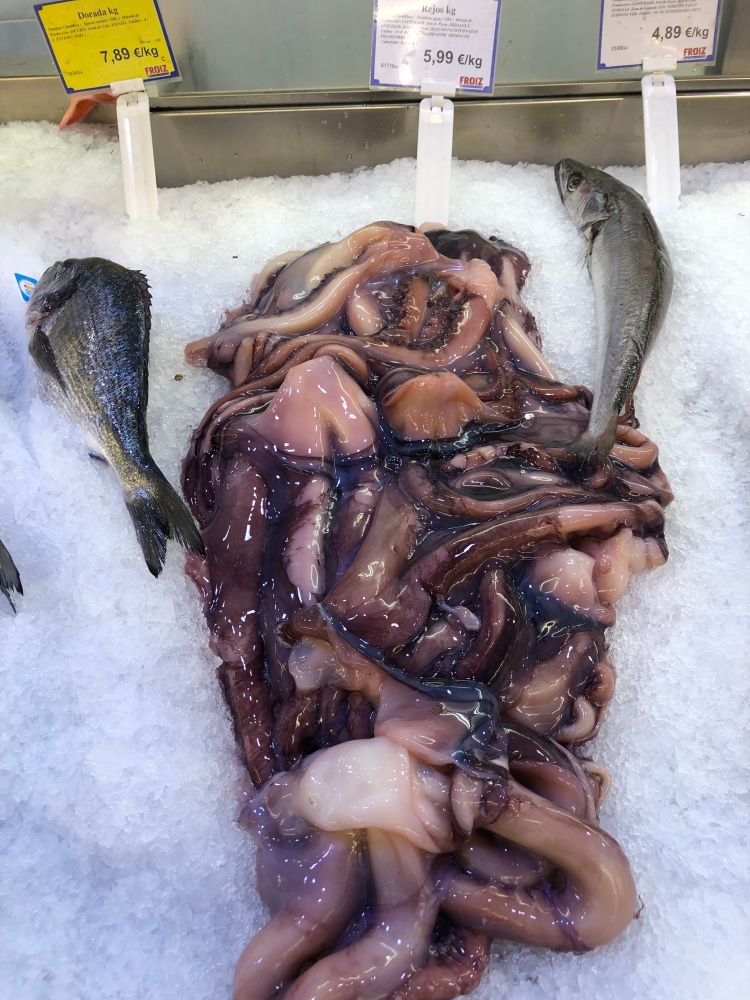 We wanted to get a little more exotic with this week’s menu. But not as exotic as the seafood shown above. This week we opted for shrimp, swine hocks, sausage, pasta, rice and the usual eggs, bacon, cheese, etc. I wanted to find sauerkraut to go with the swine hocks but that word does not translate. The best I could do was to find a small cabbage. 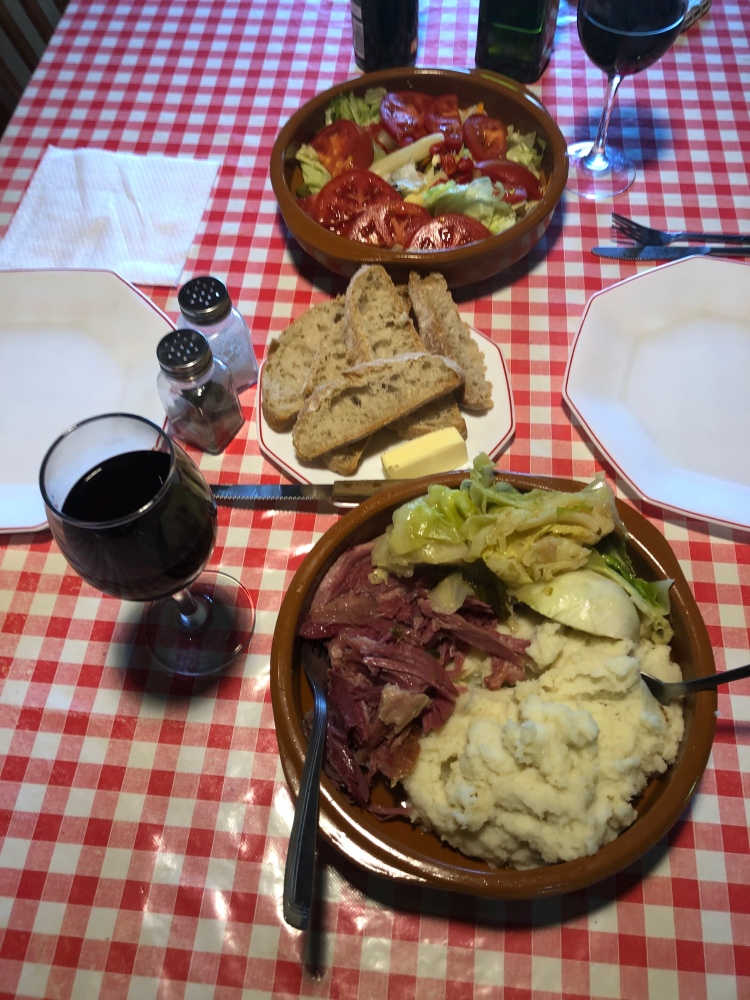 Here is the end result of the swine hocks experiment. It tasted a little bit like corned beef. We used the leftovers to make soup for the next day. 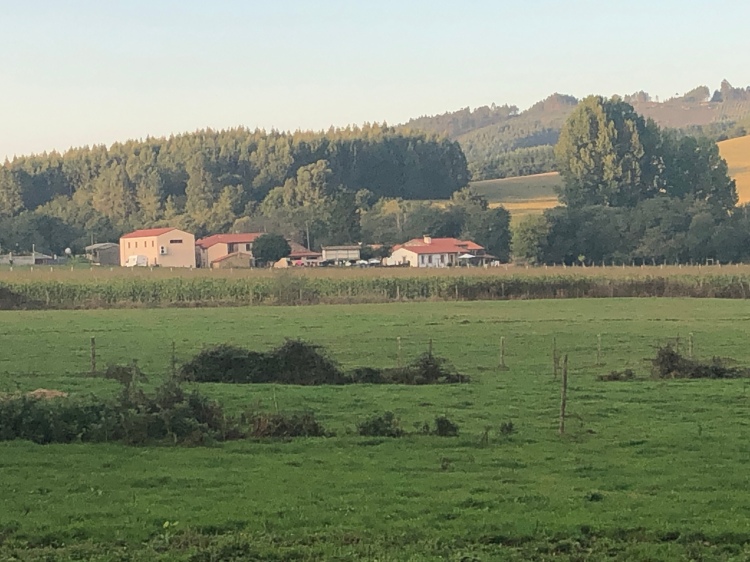 The cab ride home from Azura is a beautiful one. Ribadiso sits is in a deep valley surrounded by scenic hillsides with farms and corn fields. 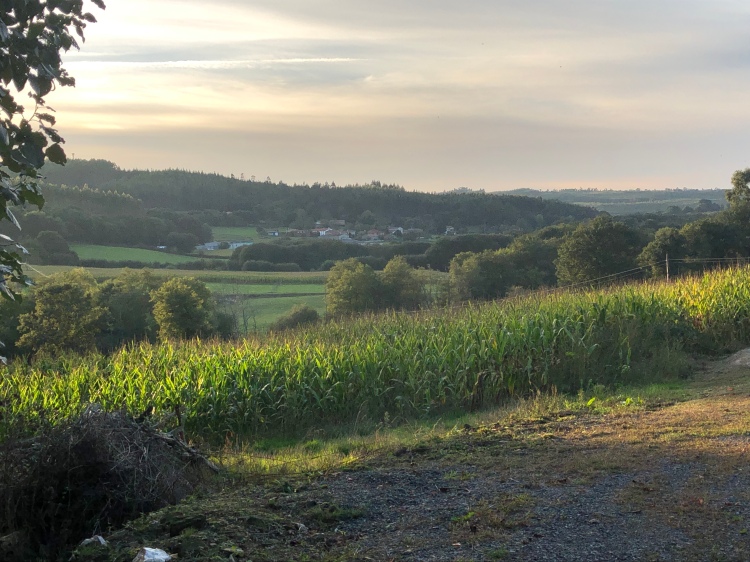 After dinner tonight, I took a walk up the hill in the opposite direction of Azura. It is a very steep hill. Mostly farm land and corn fields. In fact, the albuergue is surrounded by corn fields. 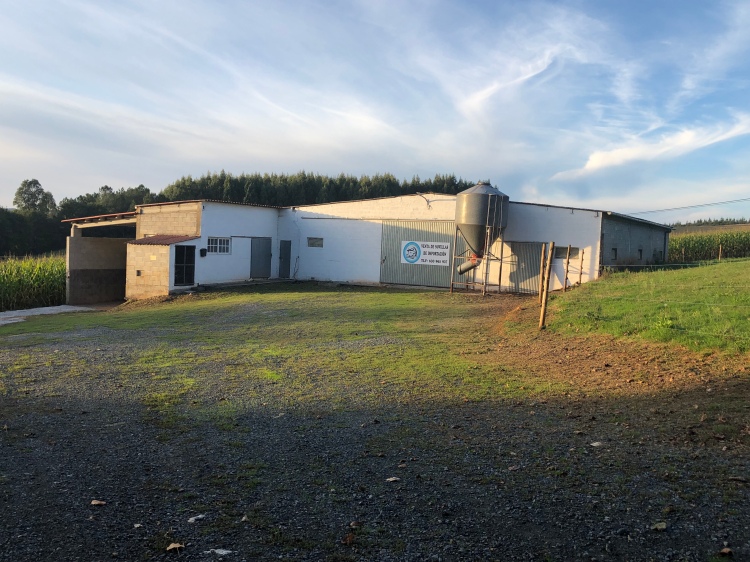 I’m not sure what this building is but the sign translates as “Sale of Imported Heifers” and I have seen Holstein cows hanging around.

At the top of the hill is Bar Manuel. I thinks its only open during the day and they serve bocadillos and tortillas. They probably get a lot of business from the hundreds of pilgrims who walk by daily. During the winter months it must be a challenge to eek out a living when there are so few pilgrims walking. 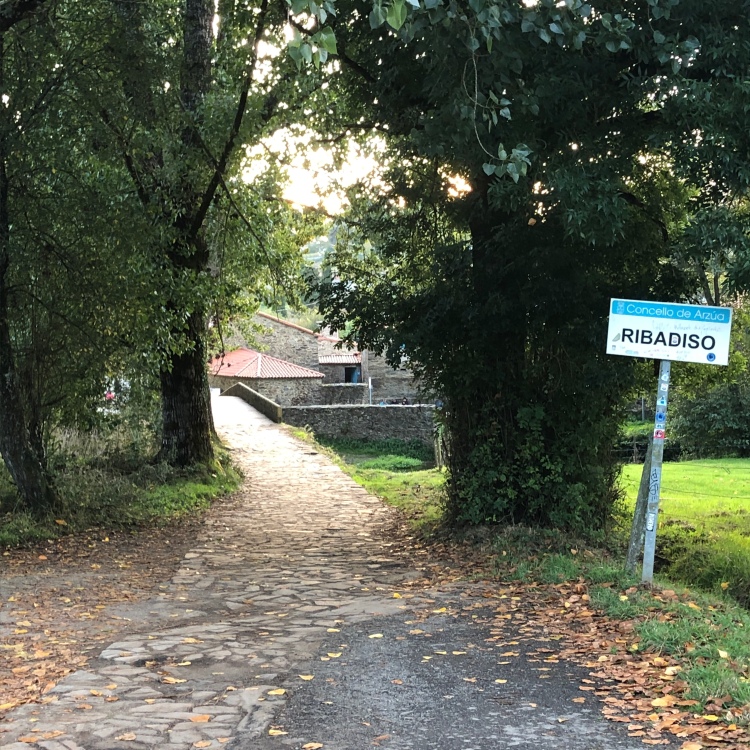 Back down the hill to Ribadiso. Our municipal albuergue is just across the bridge. I’m enjoying the peace and serenity of being in farm country and being surrounded with beauty of nature.