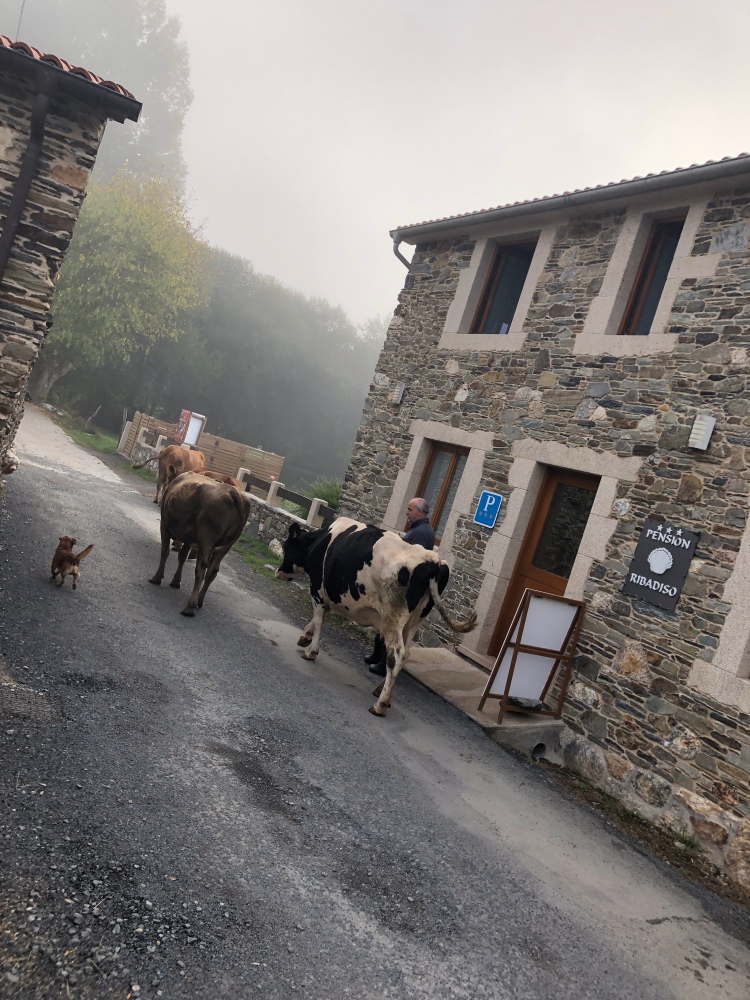 Around 10:00 am, little Chisco, who thinks he’s a herd dog helps farmer Alfonso escort the cows to their pasture. 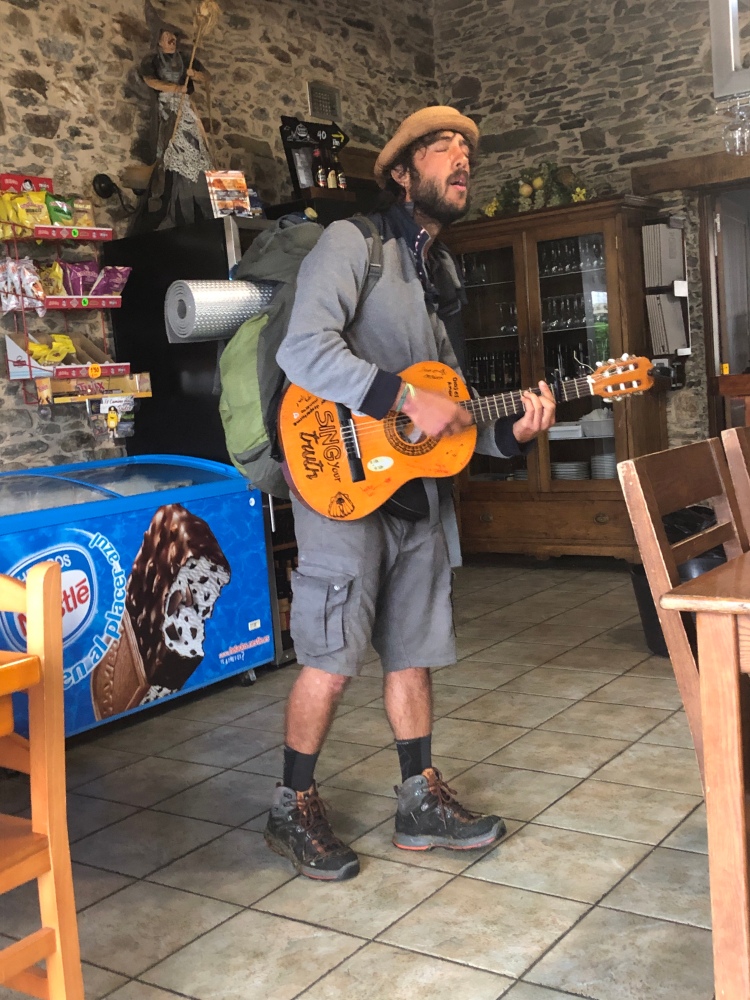 The singing pilgrim stops for a song and then he’s back on the Camino again. 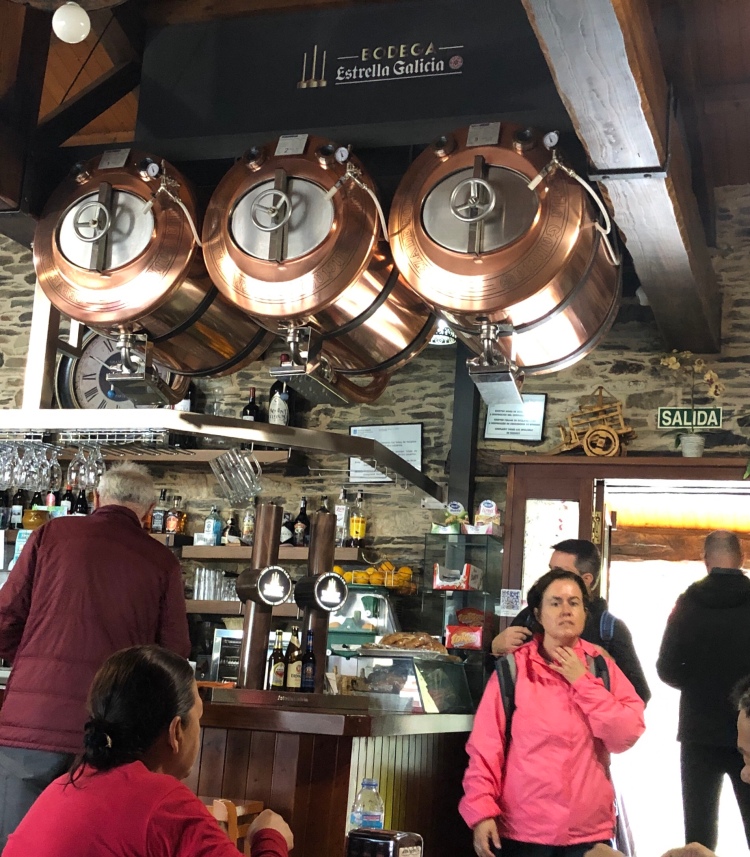 At Meson Rural, there are three copper vats that hang over the bar. We have seen these elsewhere and wondered if this was some type of micro-brewery set up. Well, today we saw how it all works. 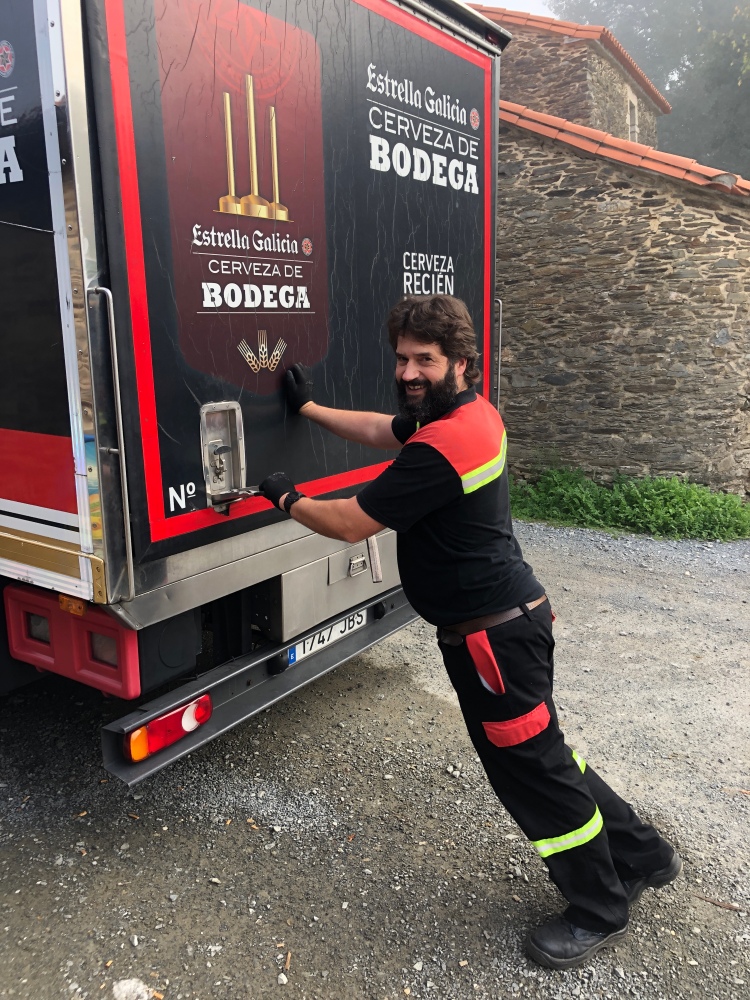 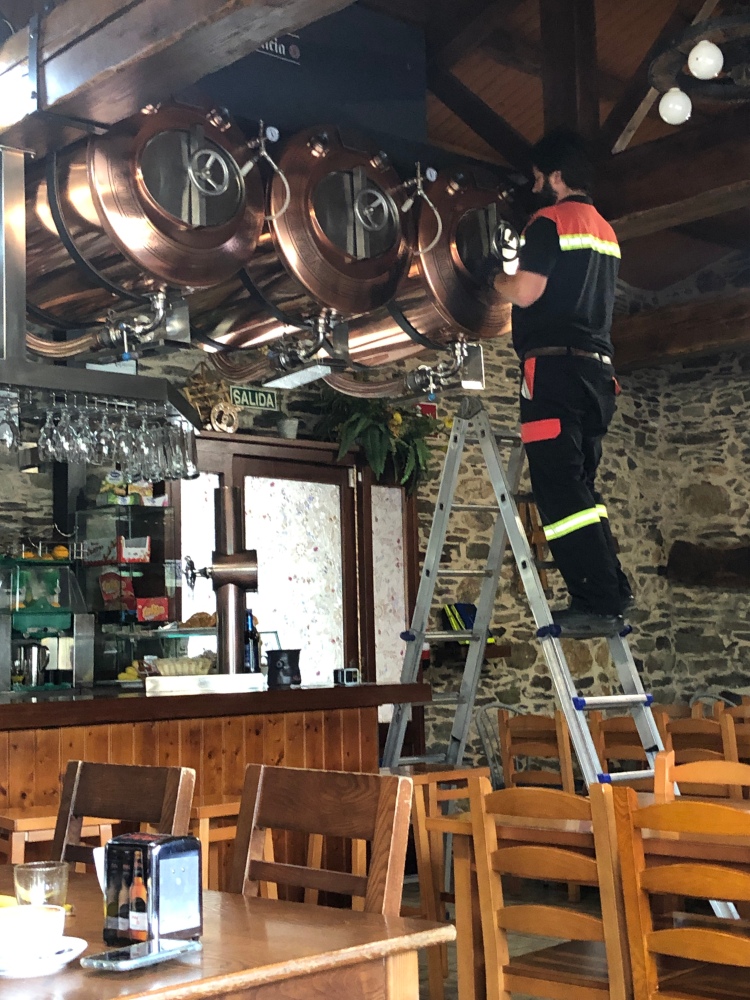 He brings his ladder in and inspects the vat. Then he opens it and cleans off the inside and the outside. 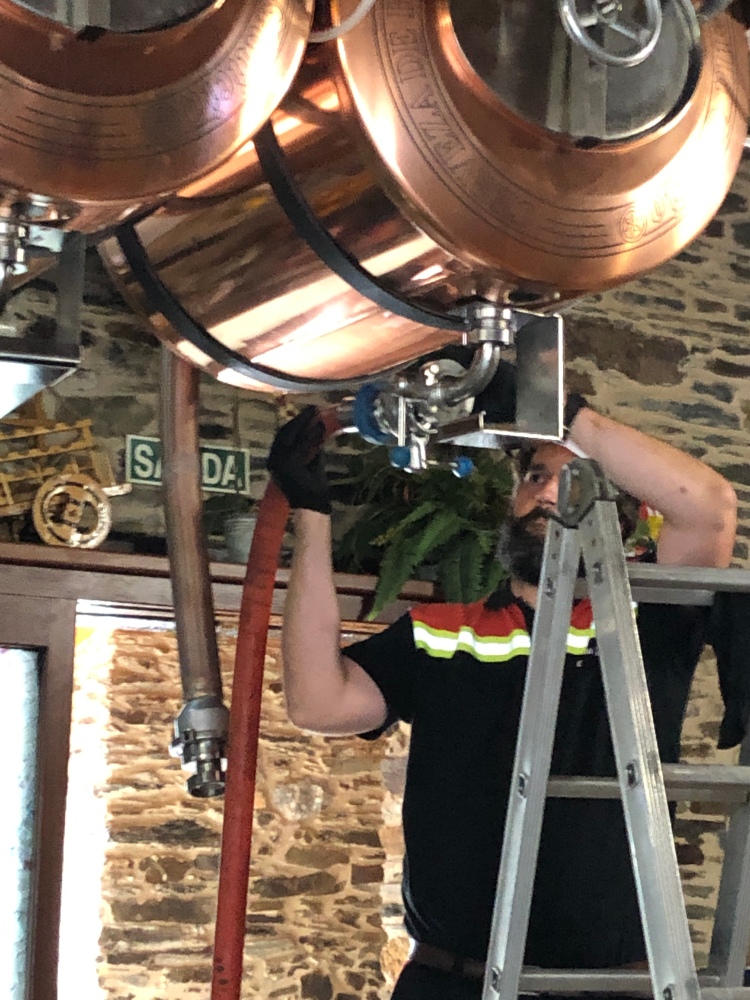 Then he brings in a hose and attaches it to the vat. 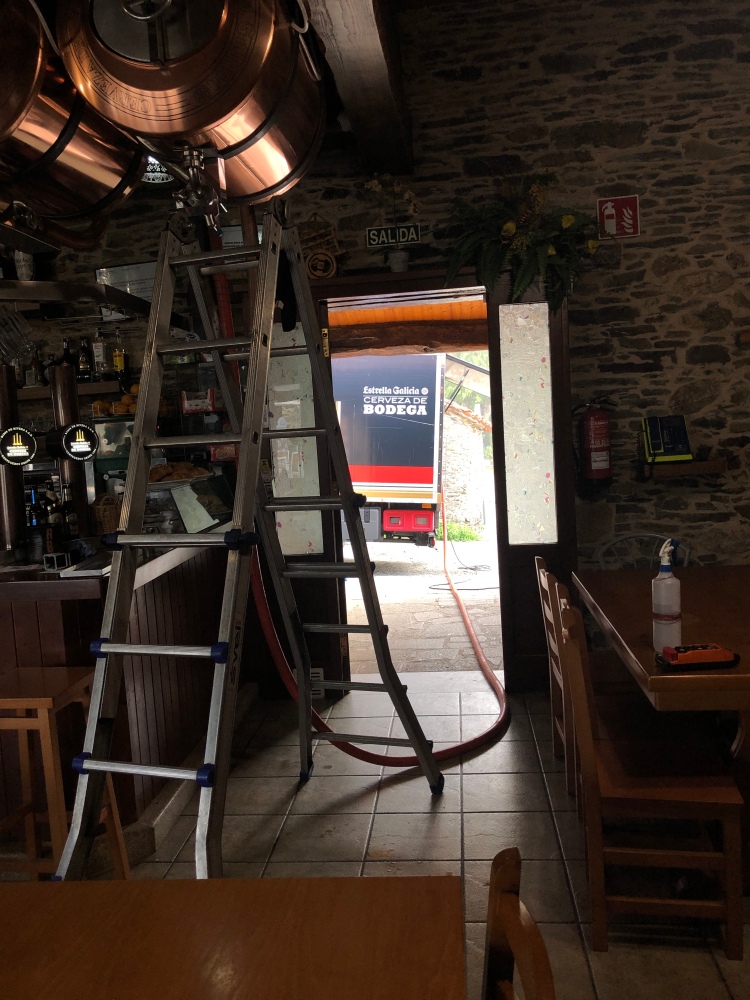 The hose is connected to an Estella Galicia truck parked outside the bar. 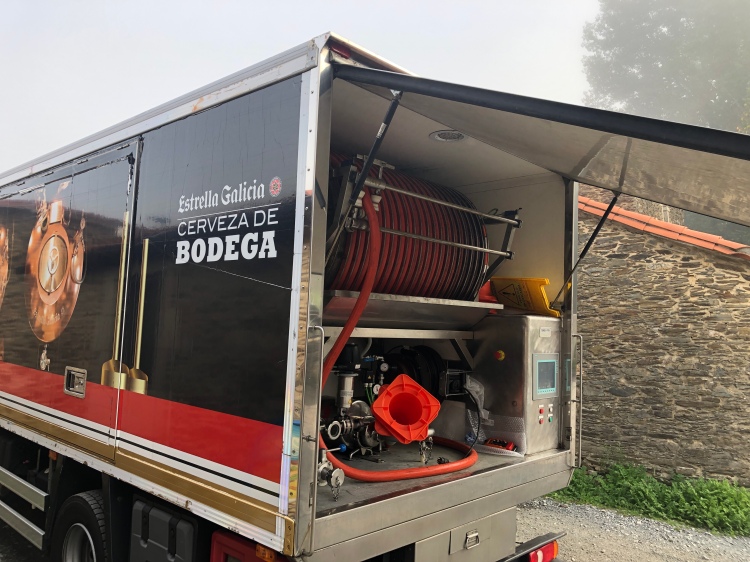 It’s kind of like a fire truck but it’s filled with beer. He fills the empty vats. There is a nitrous oxide tank hooked up to the spigot where the beer is poured from. I don’t think I’ve ever seen this kind of system in Minnesota. Seems like an economical way to provide beer as opposed to kegs. 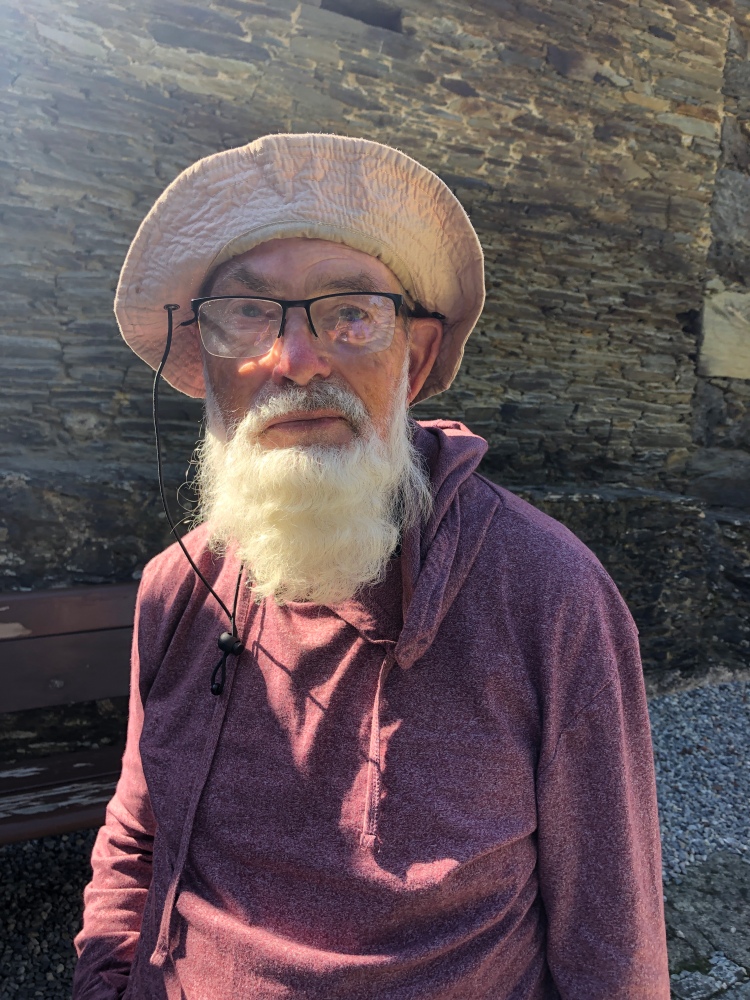 Pilgrim of the Day: Dieter from South Africa — He’s 80 years old and walking the camino with his son Robert. He was born in Germany and recalls living there when he was five years old and the war was on. They sent the women and children to live in the countryside in case the city was bombed. Years later as an adult, he went back to find the women who had sheltered him during the war to thank them. He lives in south Madagascar and loves living there. 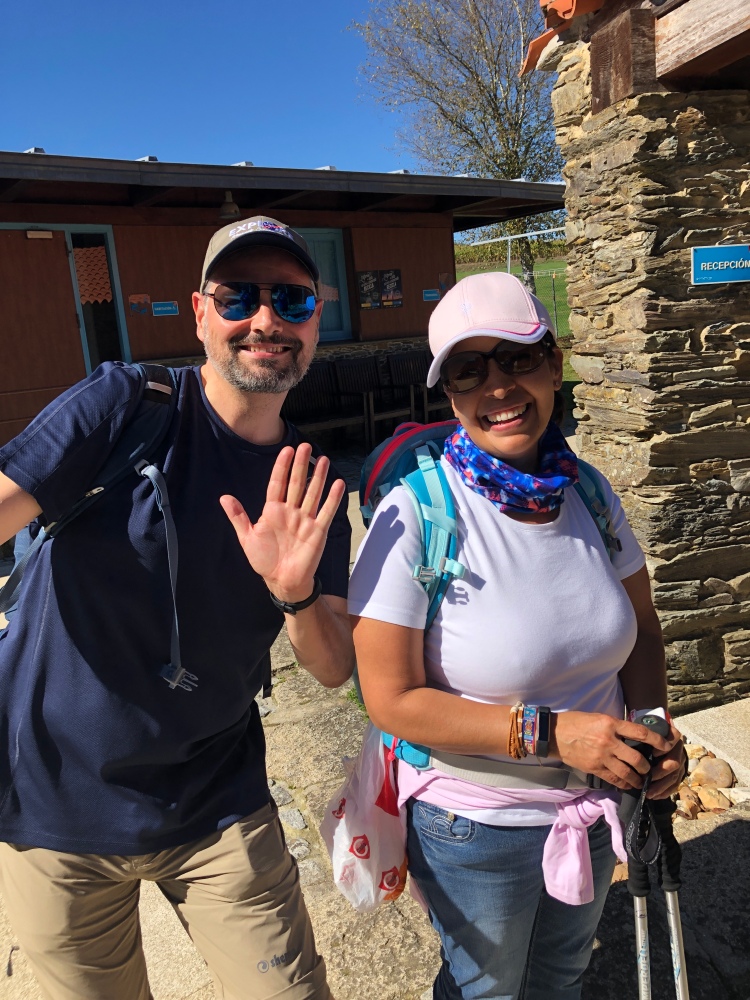 Cutest Couple: Evan and Blanca — Evan is from Switzerland and Blanca is from Mexico. They live in Switzerland. They enjoyed walking Camino Frances and love Spain as well as the ambiance of the Ribadiso albuergue. 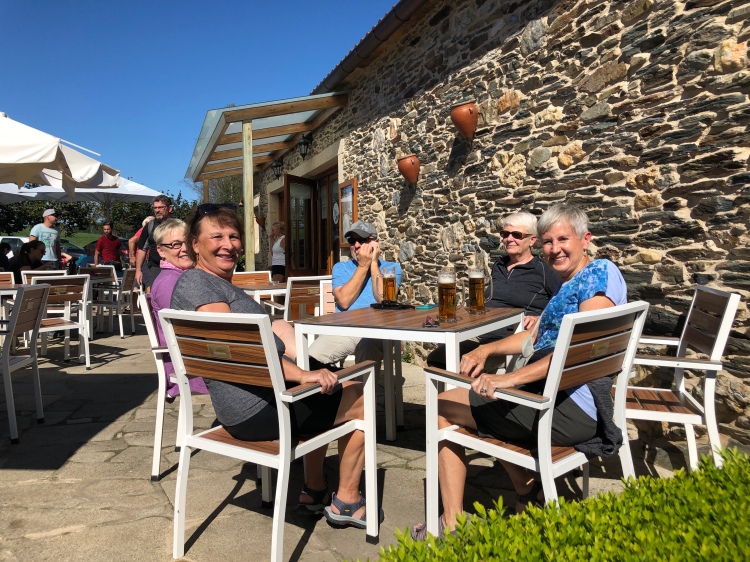 Strangest Coincidence! We started talking to a group from Michigan passing by the albuergue entrance. Somehow Terry made a connection with the man (in the above photo) wearing a blue shirt and cupping a cell phone to his ear. He was from the same small town as her co-worker Sharon. Terry gave Sharon a quick call to see if she knew this man and sure enough she did … it was her brother’s best friend and she hadn’t seen him in decades. Terry ran next door to the Meson Rural where the Michigan group was on the terrace having a beer. She connected Sharon and John by cell phone. It was a nice reunion. It’s a small world.