It’s Wednesday in Ribadiso! The sun is out and it’s warm compared to yesterday when it rained and was cold. When the sun is shining there is more pilgrim traffic. 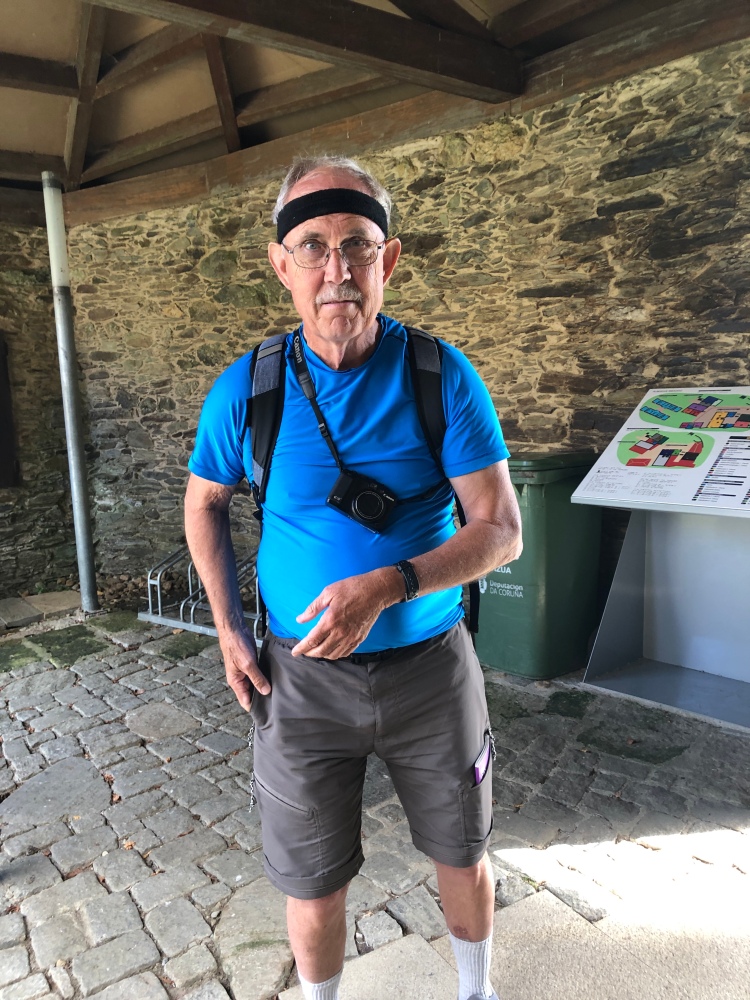 First Pilgrim to Arrive Today: Bradley from Virginia. He’s familiar with the Midwest because he went to grad school in Madison. He has walked six caminos– the Ingles, the Norte, Primativo, Portuguesa and Frances twice.

Pilgrim of the Day: Girard from Montreal — “Call me Jerry,” he says with a thick French accent. This guy is a gem! Very fun to be around. After telling him there was no Mercado in Ribadiso he was going to walk 1-1/2 miles uphill to get some bread in Arzua. We offered to give him some of our bread. It was day old — to make it look better I put a ribbon on the bag. He was napping in the dorm when I dropped it off so I gently left it on his stomach.

Terry’s Bench also helps with travel arrangements. This gent from the United Kingdom was going to walk the Frances with a friend and his son. The wife became seriously ill and the friend and son cancelled at the last minute. He decided to walk it alone. He made it this far with no problems but needed help making arrangements to stay in Santiago.

Loveable Local: Maricarmen — Maricarmen is Galician and lives nearby in Arzua. She works for the Galician government as an Albuerguesa at our municipal albuergue. She alternates days with Ana, the other Albuerguesa. She speaks a few words in English but most of the time it’s “no comprende.” Her husband is a baker. She often brings us bread, eggs and tomatoes from their garden.

Cutest Couple: Simone and Mattis from Hamburg Germany — Simone had worked as a volunteer hospitalera (like Terry and I are doing now) at an albuergue in Ponferrada. Her son Mattis wanted to see where she worked and he wanted to walk the Camino. He is on fall break from school so they have two weeks to walk from Sarria to Santiago. Simone’s husband stayed home with the younger children. They had already visited the albuergue in Ponferrada and Mattis got to see where his mother worked and what she did. This kid was having a great time at our Albuergue — he was in and out of the river, playing with dogs and interacting with the other pilgrims. Bueno!

Bathrobe Bob from San Diego stopped by on his way to Arzua. He is wearing a bathrobe with a sarong underneath. 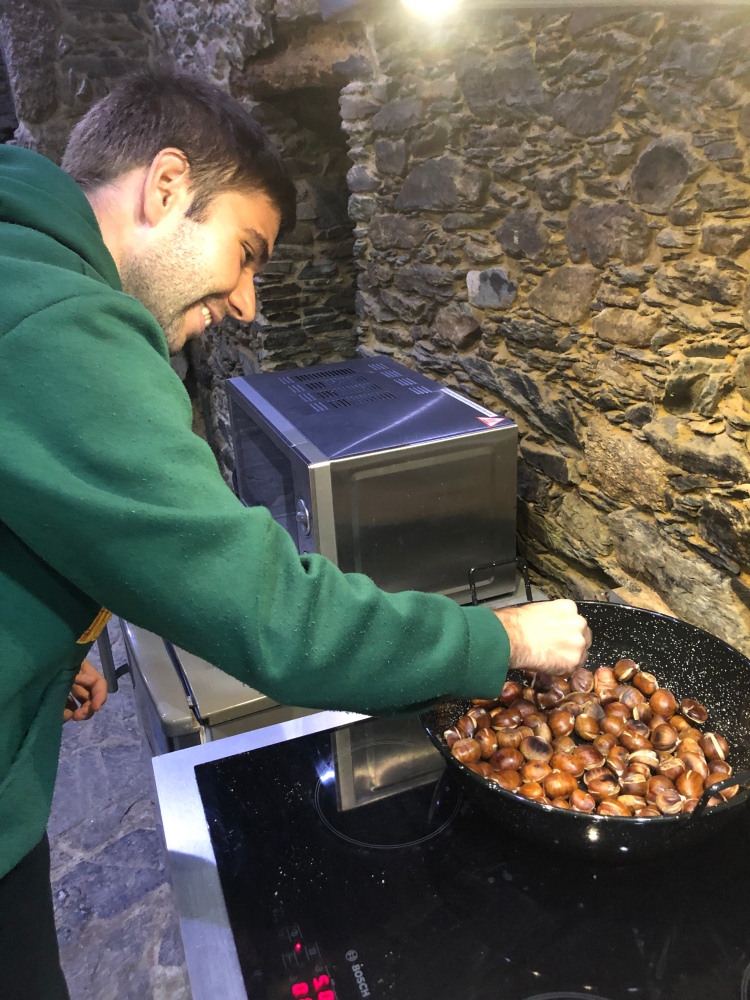 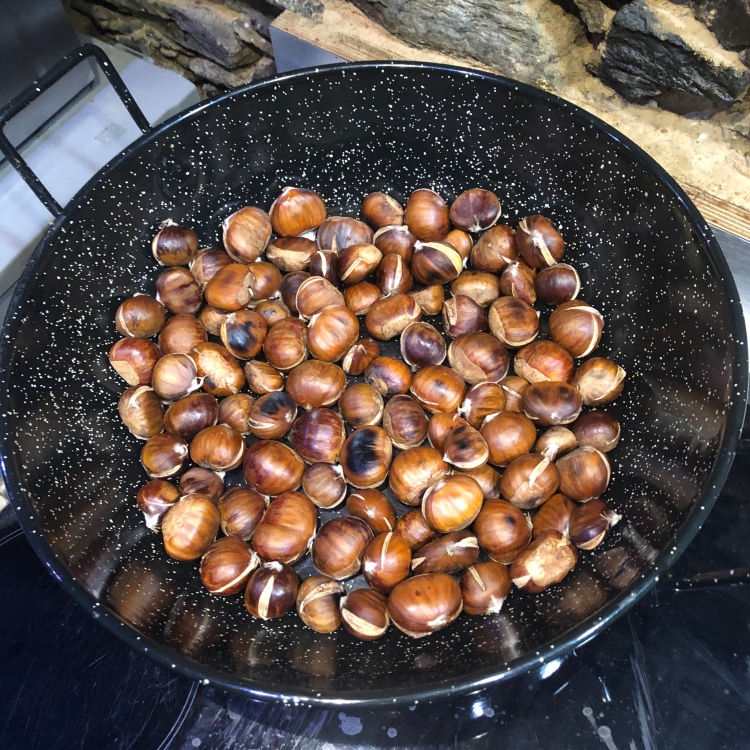 Jesus from Madrid roasting chestnuts in the Pilgrims’ kitchen. He probably gathered them on his way. As we discovered when walking Camino Ingles, Chestnuts are plentiful in Galicia. 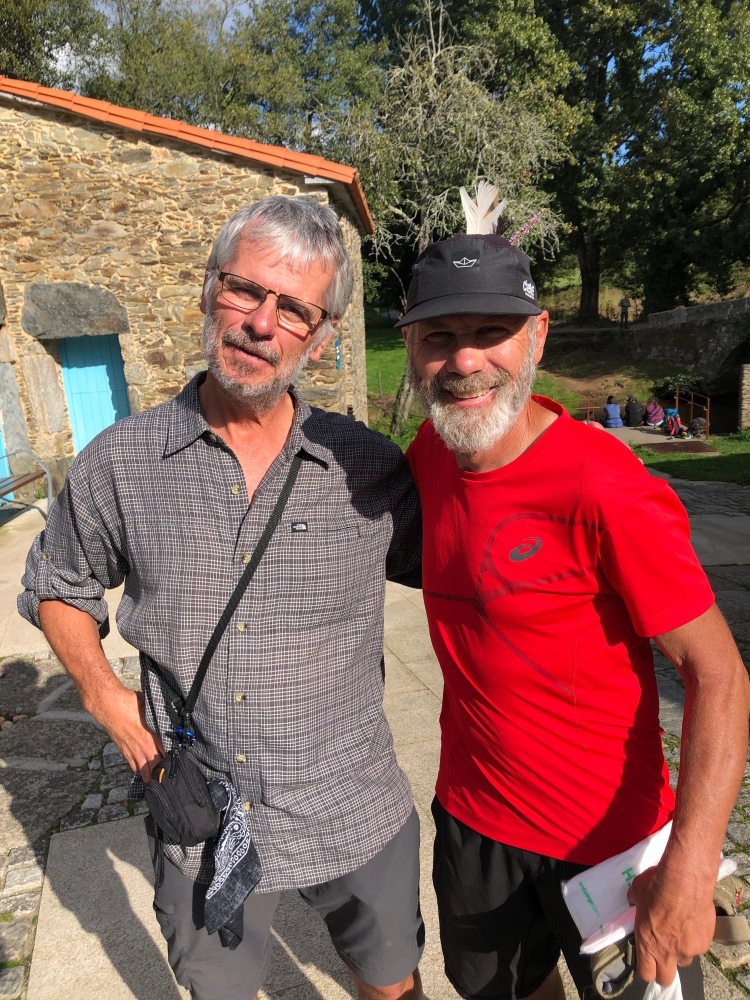 Another French Canadian: I welcomed the dude in the red shirt in the late afternoon. He said he was from Quebec. I introduced him to Girard from Montreal. There was a burst of French verbiage, smiles and pats on the back … oui oui new friends!

Girard from Montreal gave a harmonica concert from the 6th century bridge this evening. It was lovely. (Unfortunately I cannot post videos on this blog.) 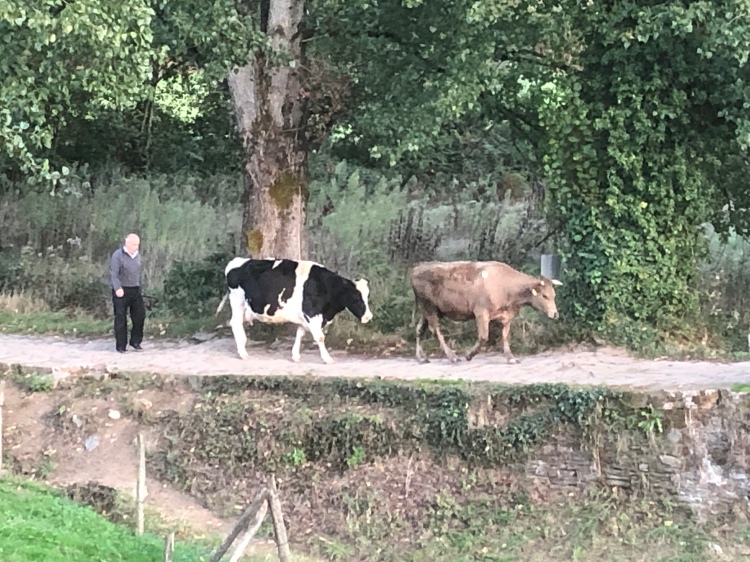 Day is pretty much done when Alfonso the farmer returns with his cows which is usually around 8:00 pm.