DAY 16, WEDNESDAY, MAY 3, 2017
SUNNY AND PERFECT
It’s been fun being with Quinn and Emily. I think we’re all weary travelers and needed an easy rest day.

We wandered through town. Quinn was impressed with the size of these giant tomatoes.

We found the dollar store. 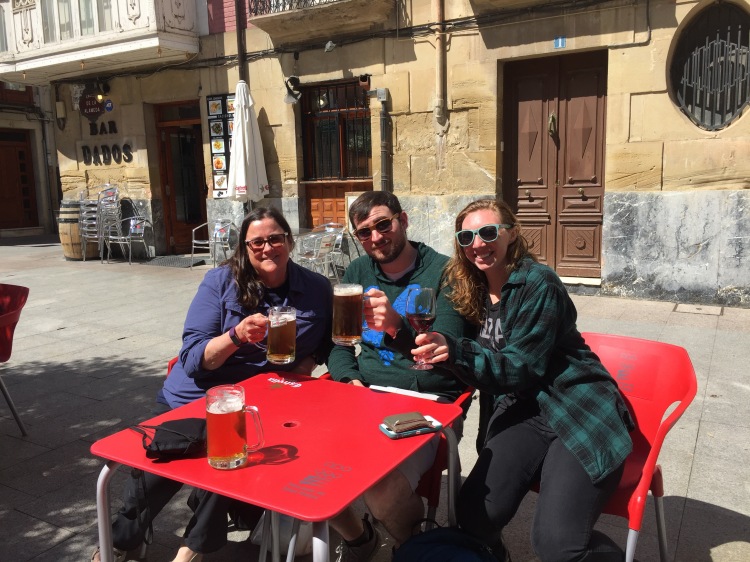 Terry and I thought we were ordering hamburgers. This is what we got. We mixed it all together and it was great. 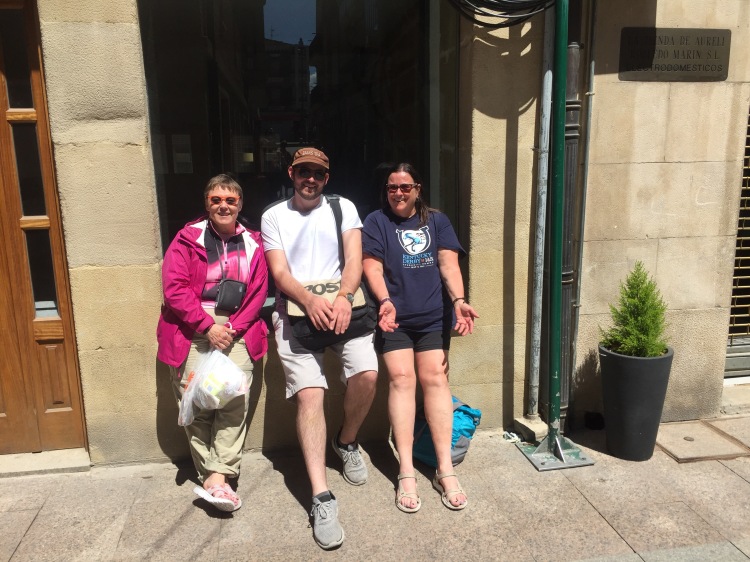 Can’t get enough of this warm sunny weather. 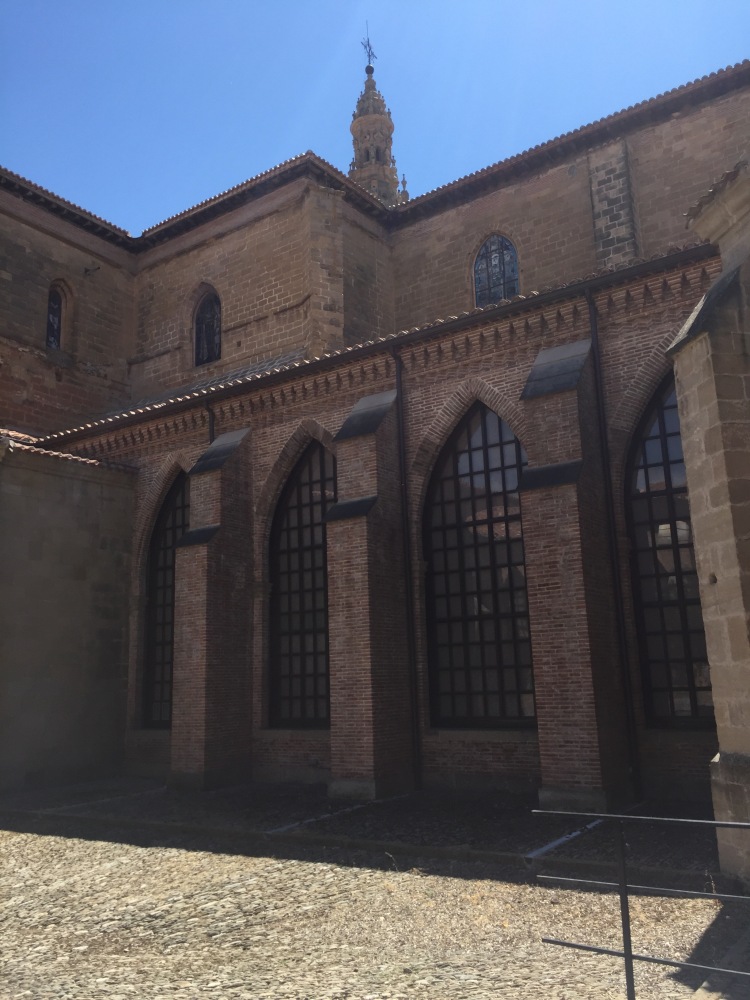 We toured the cathedral of Santo Domingo. Very interesting. It’s also a museum and they charge 5 euro to tour it. You can get in free if you go during mass times.

This is Santo Domingo. Many legends exist about his miracles .  The most famous is the one about the hanged innocent man and the chickens. The descendant chickens live in the cathedral. 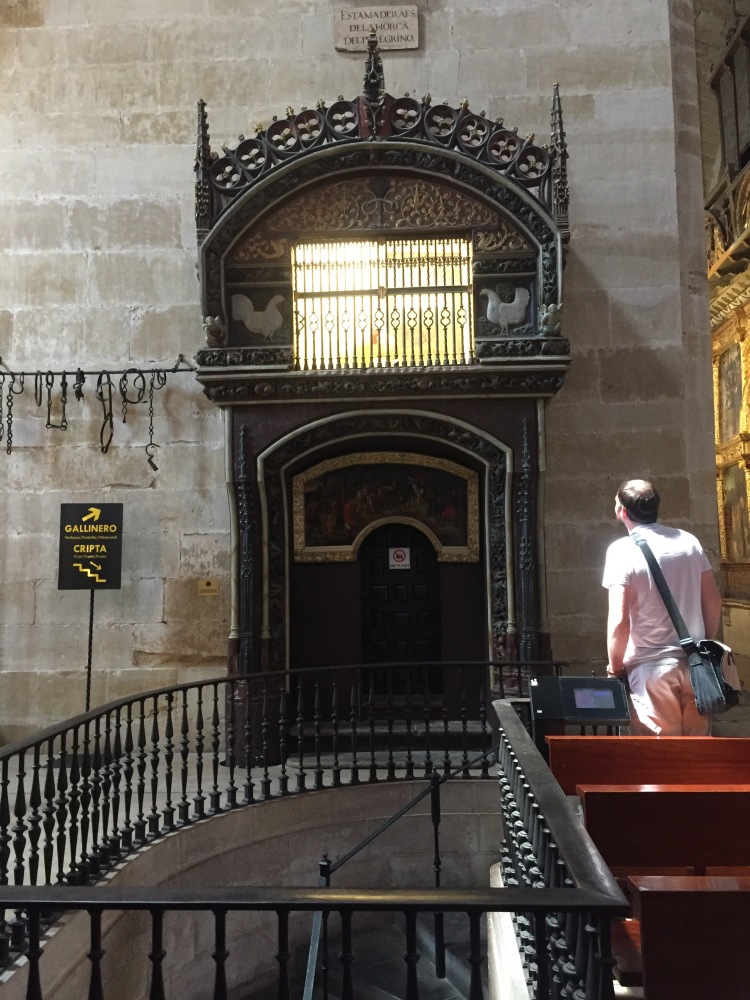 This is the fancy perch in the Cathedral for the hen & rooster descendants. 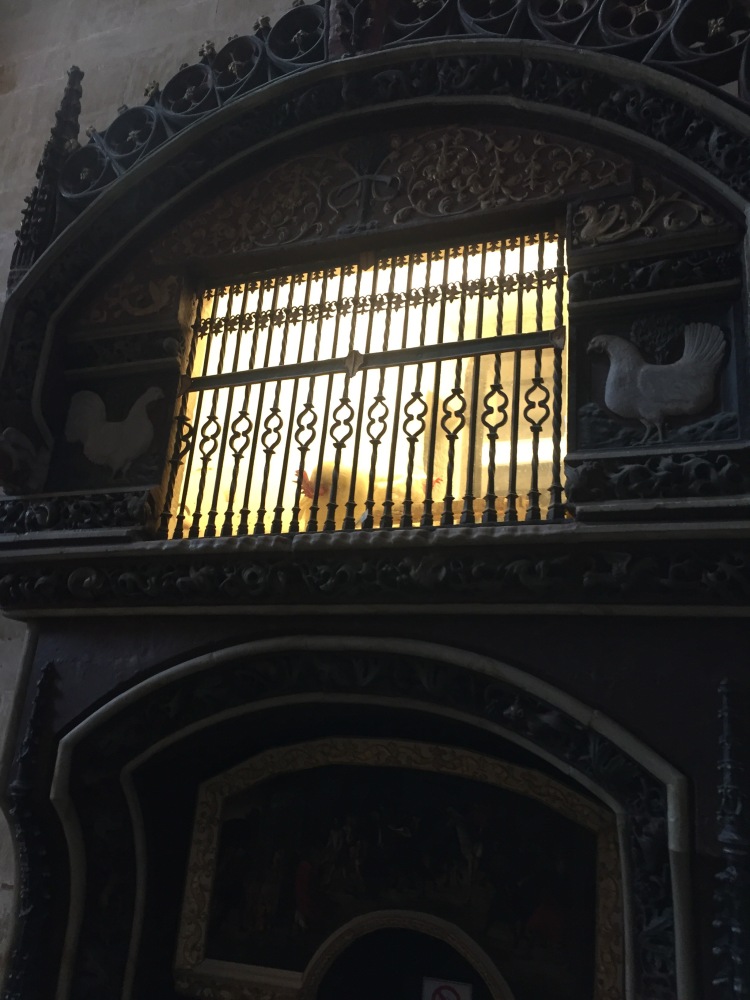 Here’s a close up of the Rooster.

THE FAMOUS LEGEND OF THE INNOCENT HANGED MAN & THE CHICKENS.

A Germán family (father, mother and son named Hugonell) were on the pilgrimage to Santiago. In Santo Domingo they stayed with a farmers family, and the farmers daughter tried to seduce Hugonell but, as a pious pilgrim, he refused her. She became so angry that she hid some silver items in his pack and after they left, called the authorities and accused the boy of theft. Upon finding the items in his pack, the boy was found guilty and hanged.

His grief stricken parents continued to Santiago, but stopped to see their sons remains on the return journey (thieves were left to rot on the gallows as a warning to others). They were delighted to find that he was still alive, claiming that Santo Domingo had held him up so he did not die. The parents hurried to the magistrate and asked them to cut him down their son, as he was clearly innocent. The magistrate had just sat down to a hearty chicken dinner, shouted, “Why he is no more alive than this roasted chicken I’m about to eat.” At this, the cooked chicken stood up on his plate, miracously brought back to life feathers and all, crowed.

In remembrance of this story, live chicken are kept in the cathedral which are said to be descendants of the resurrected fowl in the story. A piece of the gallows is displayed on Santo Domingo’s tomb.

Taken from, “A Village to Village Guide To Hiking The Camino De Santiago” 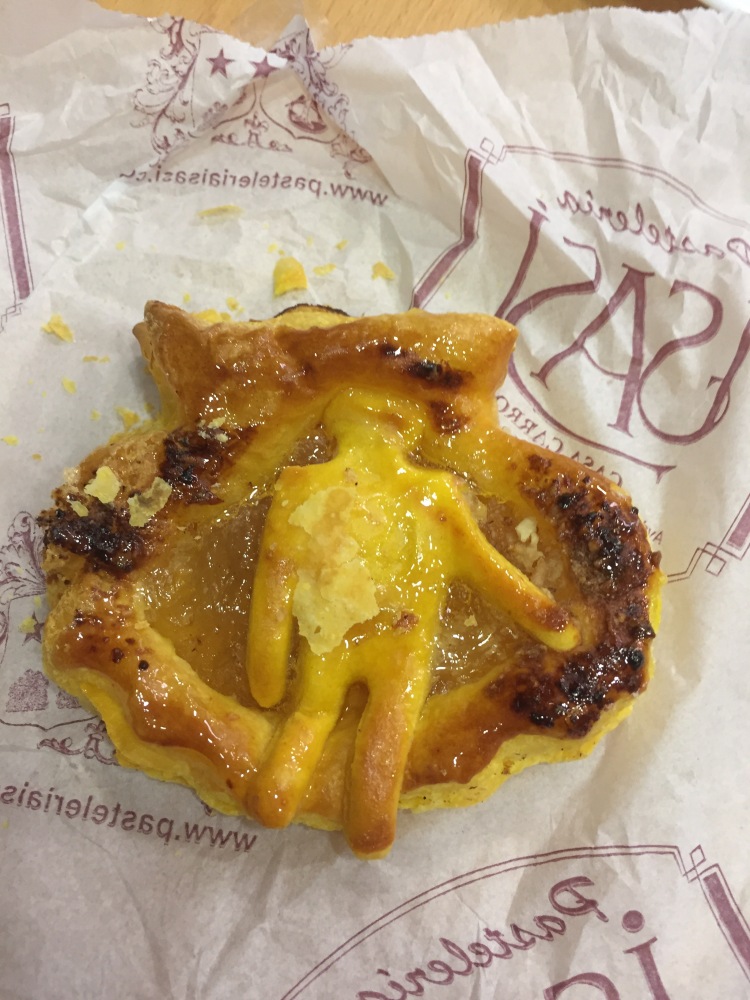 Ahorcaditos (little hanged men) are sweet almond cream pastries shaped like a shell. Very popular here. A little bit on the weird side though.

We found the tomb of Santo Domingo in the crypt of the cathedral.

The cathedral museum had a statue of one of my Swedish favorites, Santa Lucía.

Lots of nooks and crannies to explore at the Cathedral. 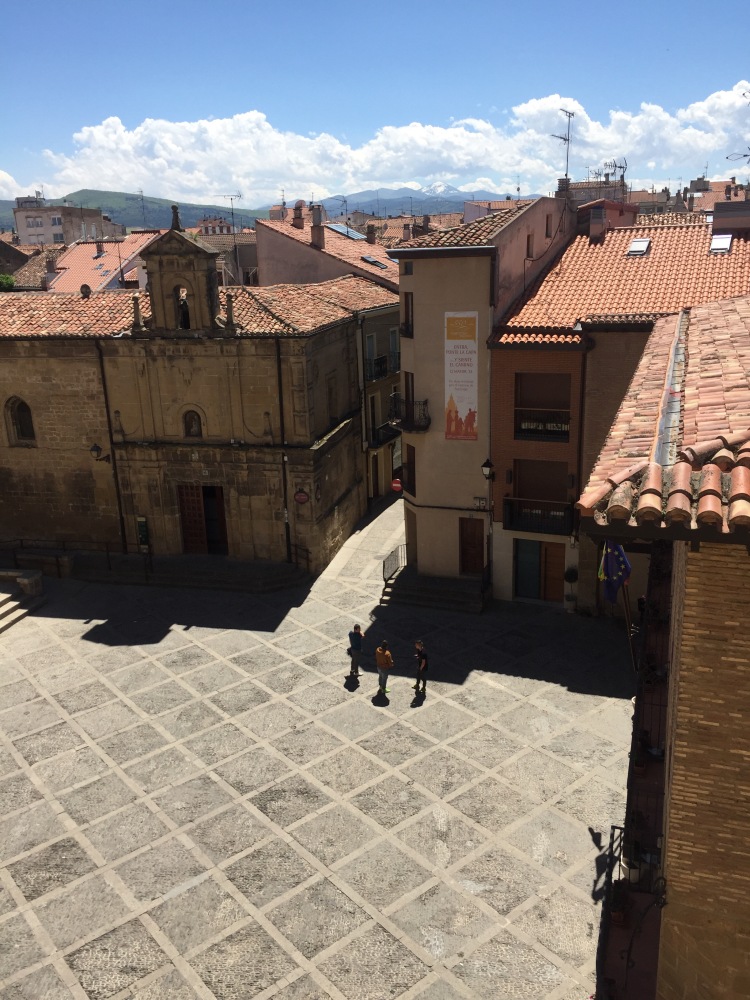 We were even on the roof level of the Cathedral which gave a great view of the courtyard and mountains in the distance.

Emily is a dog lover and couldn’t resist petting Chico who is a Burmese mountain dog.

This is another Santo Domingo tradition, a little on the crazy size. The women shown here are carrying cakes on their heads. They parade through the town as part of the Santo Domingo festivities held around May 11. After they process through, everyone eats cake. Go figure.