Bull fights, known here as Corrida de Toros are a ritual and spectacle with roots from the 18th century.  Supporters of bullfighting say it is part of the heritage — an art form that must be respected. They point out that the average cow raised for consumption lives a confined life of less than two years and slaughter houses are cruel. Bulls are raised in the wild and live in harmony with natural surroundings. They live 4-6 years and have a very good life. The 15 minutes in the bull ring is meant to be a quick death. 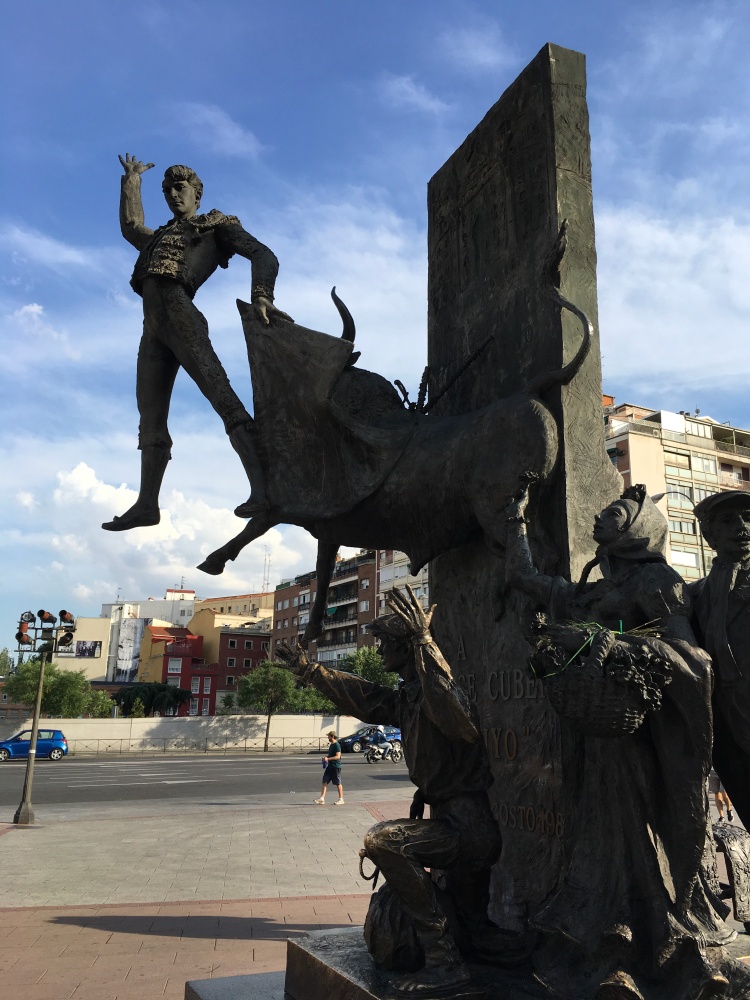 When I was walking the camino in Burgos, Terry and I met a nice florist from Toledo whose name is Humberto. We had an interesting discusssion about bull fighting. He corrected us and said it is not called bullfighting, it is called Corrida. He said he was not a fan of it, however, it is an important part of the Spanish heritage. The farms that raise the bulls take great pride and consider it an honor for the bull. I was intrigued by the cultural piece of bullfighting and my curiosity took over. Having never seen a bullfight, it would be difficult to understand this ancient practice and the passion of those who support it. Since bullfighting has been banned in Catalunya, Madrid would be the best place to experience a bullfight and so we did. 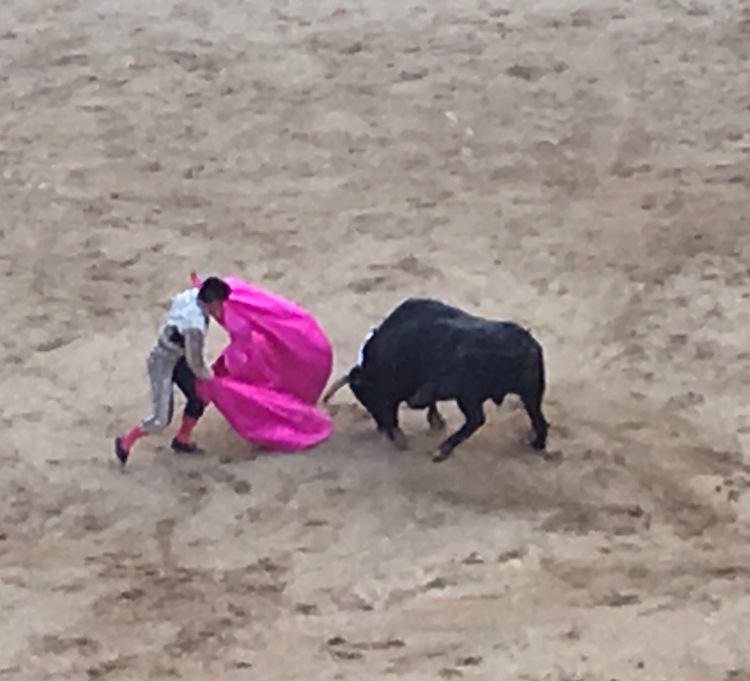 The most common pass the matador makes is called a veronica which is the act of letting his cloak trail over the bull’s head as it runs past.

Barcelona banned bullfighting in 2012. One of it’s famous bull fighting arenas is now a bullfighting museum and the other is a shopping center. The ban resulted in thousands of jobs being lost and loss of income for breeders. The popularity of bull fighting is dwindling especially with the young. Many anticipate that bull fighting will be extinct in Spain in the next ten years. 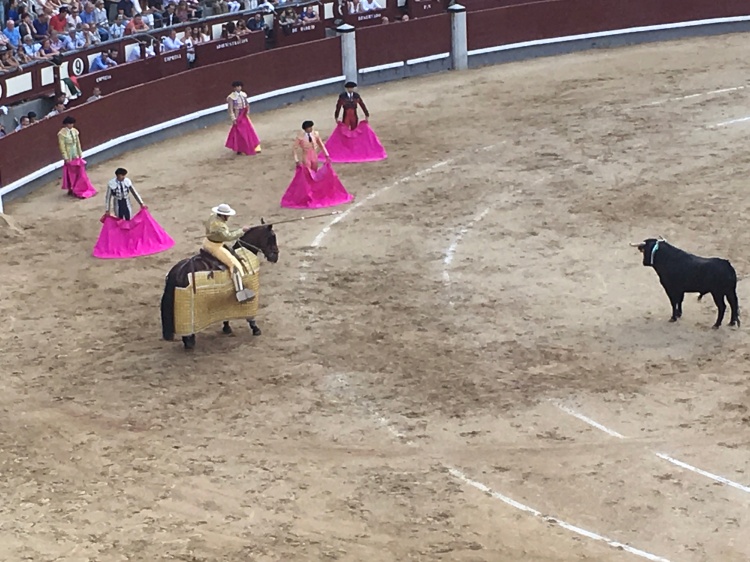 Apparently on Sunday mornings, they have a form of bullfighting where the bulls do not die. It’s a series of steps with the matador and assistants waving their capes and engaging the bull. This would have been perfect except that we had planned to go to Toledo on Sunday. Instead we opted for the Saturday evening event with novice matadors and younger bulls. Sunday night bullfights feature  the seasoned matadors and the 6 year old bulls.

The evening we went to the Corrida, was the same night as the European Soccer championship featuring Real Madrid and England (which took place in England). We assumed it would be a very light crowd at the arena. We were wrong. The stadium was about 3/4 full and the only open seats were mostly in the sun which was where we were sitting. I anticipated that the audience would be mostly old men. I was wrong again — it was everyone … old grandmas, babies, young couples, families, young women. Everyone seemed to be dressed quite nicely but that is common in Spain. I did not notice the presence of tourists.

We arrived a little bit late and just like at a theatrical performance, they do not allow you to enter the arena during a bullfight. We had to wait until the current match was over and wait for the ushers to open the door. We barely had time to find out seats before the next match started. There was a live band in the upper deck that played music to indicate the different phases of the fight.

A band was seated in the upper section. They played music to indicate the different phases of the bullfight.

The bull, wearing ribbons with the colors of the breeding farm, romped out and did a few runs at the cape. After about 10 minutes the matador and the other attendants left. The bull was alone in the ring. A half dozen steer entered the ring. We had no idea what this was all about. Apparently they send the steers in to lure the bull out. He did follow the steers out of the ring. We were relieved that the bull was not killed and there was no blood or gore. Bulls are only allowed to fight once because they learn how it works and would probably outsmart the matador if they had a second chance.

This bull was spared. They send in the steer to lure it back into the pen.

… and it worked. The bull followed the steer back into the pen.

In the following rounds we saw the three phases of a bullfight with each phase being marked by the band’s performance. The cruelest part, I think, is the Rejoneadore with a long spear riding a horse that is blindfolded and wearing armor. He agitates the bull until it charges into the horse. The bull tries to gore the horse and continues slamming  into it. The horse stays calm and holds his own until the rider can spear the bull and it runs off. Then the Rejoneadore’s job is done. The music plays and he and the horse leave the arena. The same horse is used for all six fights and doesn’t seem to be phased by the attacking bull. 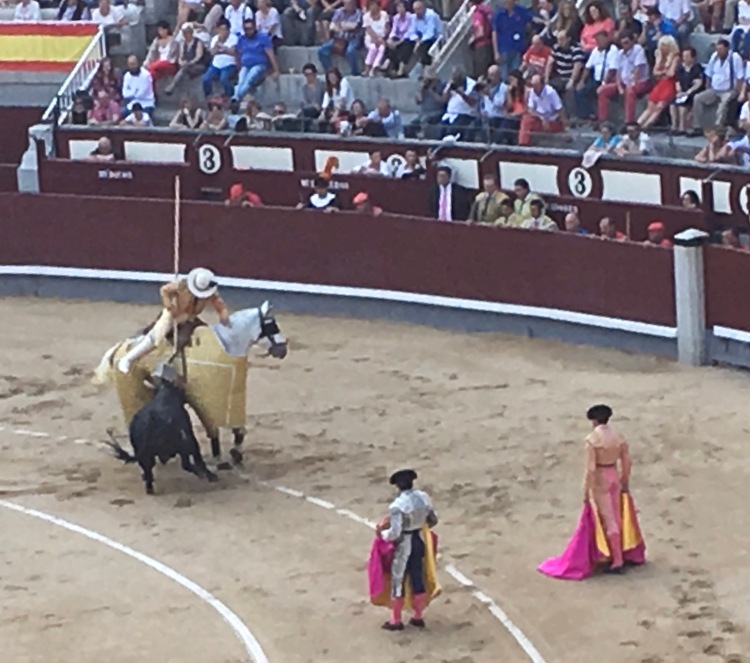 I had read that a law was passed a couple years ago requiring the Rejoneadore’s horse to have armor. The horses used to die too from being gored by the bull. I wish they would give the bull armor too.

Next comes the picadors who spear the bull with six banderillas which are festively decorated barbed darts. There were three picadors and each ran directly up to the bull and speared the darts into the shoulders. A nearby matador distracted the bull so the picador could run and hide behind a wooden wall for safety.  The music plays again. The matador does several passes. In one of the fights, the matador was lightly gored in the thigh. There were a lot of gasps from the audience. A pause. He composed himself and continued with the fight. Looked like he was limping a little. Eventually, as the bull is running for the cape, the matador finishes the job with a sword and then a dagger. Our seats were so far a way that we couldn’t see the gory details.

The band plays, the crowd stands up and cheers. White hankies are waving as the matador prances about like a proud rooster with it’s chest puffed out. The fans sit down and wait for bull to be removed … it is cinched up to three horses. If the bull’s performance was brave, they take an extra lap before dragging it out. The audience stands and applauds the bulls performance … it died with honor.

My reflections about the bullfights we experienced:

It wasn’t as gory as I anticipated. I think fans of bullfighting have it in their blood. They were raised with this tradition so they are desensitized to it just like we are desensitized to eating a hamburger with no thought as to where it came from. The people in the audience seemed like normal people out for an evening of entertainment. Would I attend another bullfight? All  I can say is that I would return to this arena as soon as they turn it into a shopping outlet. Ole!

3 thoughts on “Madrid: What’s the Bull all about?”