We are meeting Diane’s cousin Mariano at 10:30 am today. Ooops! We overslept and now were meeting him at 1:00 instead. Everybody was up and ready to roll by 10:30. We headed to the San Miguel Market for breakfast but stopped at an interesting bakery. For the Easter holiday they make something called Tarjillo. It’s kind of like tres leche cake.

We bought a few items and ate them right on the street.

Mariano met us in Puerto del Soul. After introductions were made, he showed us a golf ball and golf tee that Diane’s dad gave him in 1994 when he visited the United States.

We walked with Mariano to the palace. Lots of entertainment on the way! Got a haircut.

Diane and cousin Mariano in front of the palace. Lots of activities at the palace.

On the way back to the hotel we found some more entertainment.

Wandered around and found a lunch spot, Ojala, in a neighborhood we hadn’t been to yet. In the lower level, there was a floor of beach sand and funky lights. We opted for table and chairs.

The food was organic and fabulous.

Back to the hotel. The weather was so cold, we put scarves and hats on the plywood cutouts on our balconies.  Several people stopped, laughed and some even took photos.

It was cold in Madrid. We Minnesotans know how to dress properly and we know a good bargain. We found a store that had knit mad bomber hats that were really warm … and the cost was 1 euro which is about $1.40. Now we look like Minnesotans in Madrid.

After a little happy hour break at the hotel, we headed out to watch Good Friday processions. Our first stop was at Plaza Mayor. A very small procession took place. The penitents were carrying tall orange candles. 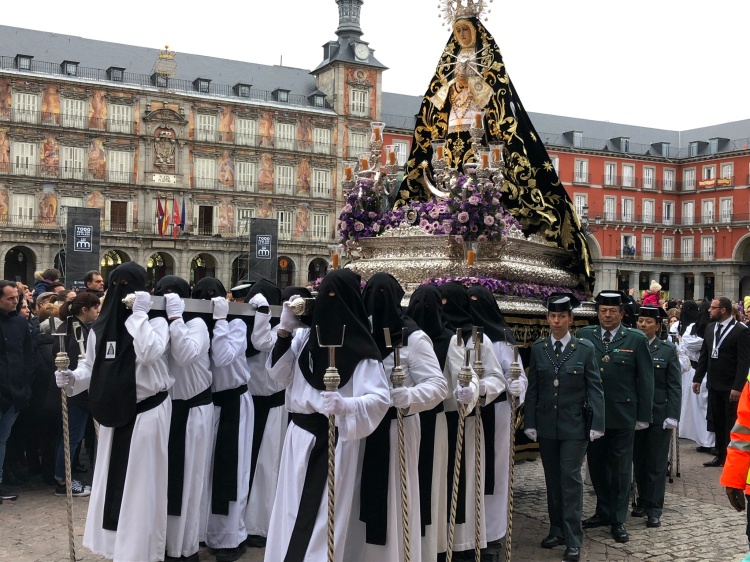 This was a short procession which ended with a marching band.

As we wandered the streets we found another procession. Lots of people crowding in  to see what was going on. 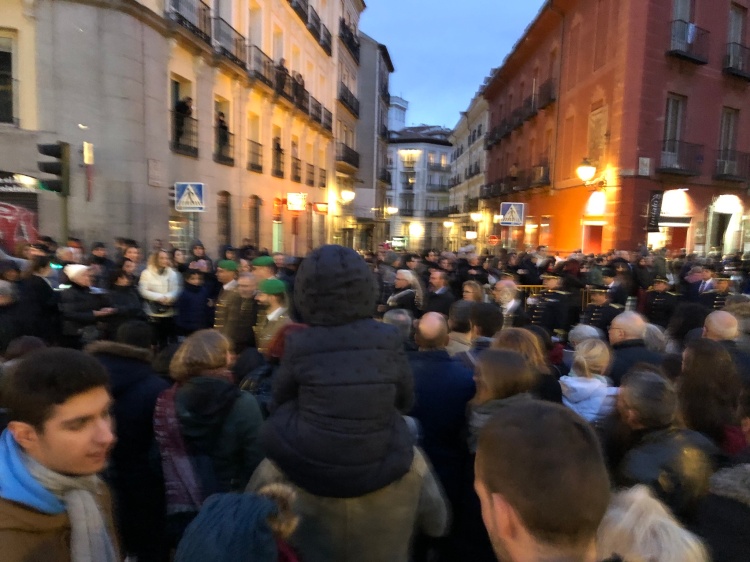 The procession started with a lead horse. 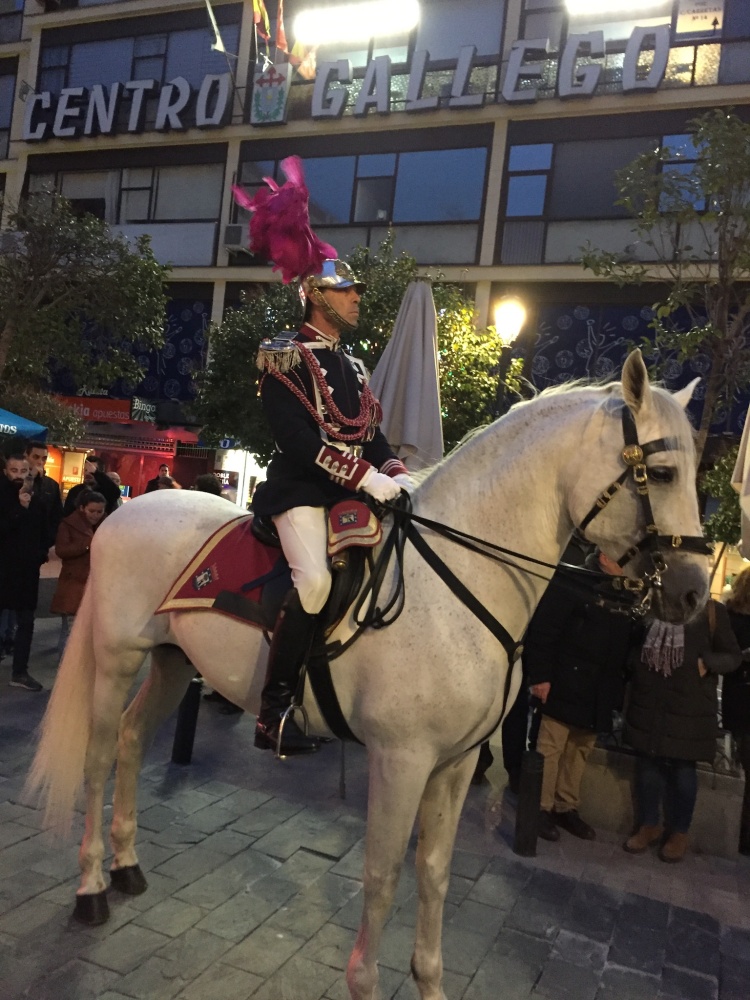 Lead horse followed by more horses. It was impressive and different from all the processions we had seen previously. 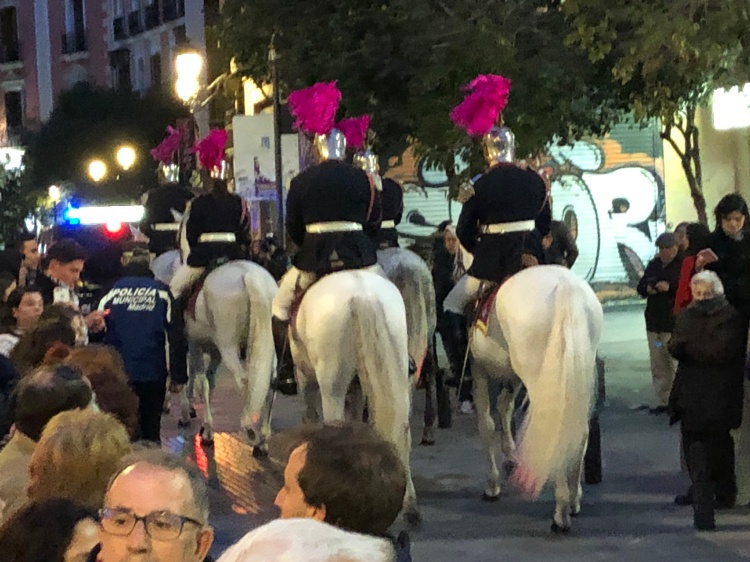 Then came a penitent carrying a cross. 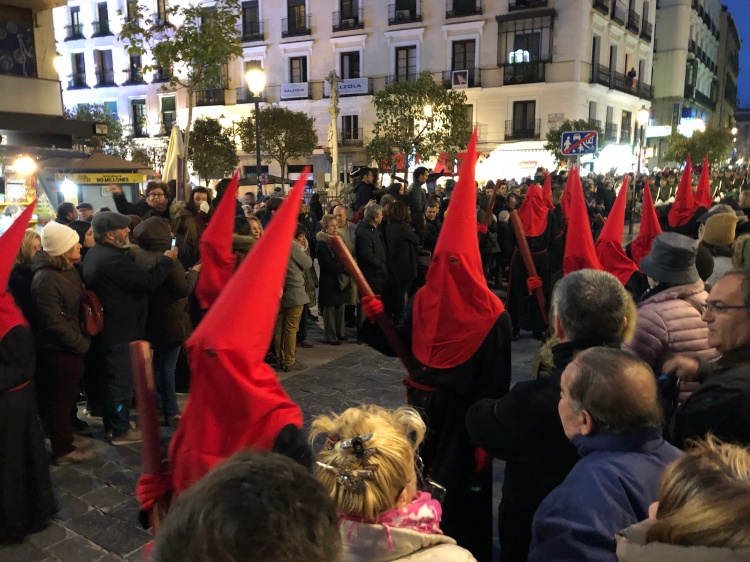 And the procession ended with a band.

Unfortunately, it started raining. We ducked into a shop and bought cheap umbrellas. We were told that when it rains as hard as it was raining, they cancel the processions. New plan needed. We went to Abuela (Grandma’s) bar and ordered tapas. We decided that it was time to see some Flamenco dancers.

We found a good Flamenco show very close to our hotel.

There were two dancers and four musicians. The show exceeded my expectations.

It was a long day, the rain continued and we ran back to the hotel. Another good day in Madrid.

One thought on “Good Friday in Spain”