Adventures in Plaza Mayor and the Market

We started the day around 10:00 am with a walk down to Plaza Mayor to the San Miguel market.

Veronica and Andrea joined us today. They are from Mexico but lived in San Diego for many years. Andrea is a friend of Ellen’s daughter Carly and she is now studying in Madrid. Her mother Veronica moved to Spain to be with her for the two years that she will be in school here. We were all going to do breakfast at the market.

A Funny Thing Happened on The Way to the Market

Lots of activity in the market place as the five of us strolled and chatted. There were a few people selling thing at tables around the square. I wandered over to see what was there. Low and behold, I found a table full of bottle caps!

As many of you know, I collect bottle caps. This is a table I made a few years ago.

Time for an Octopus Empanada

We continued chatting and walking to the San Miguel Market. It is not a traditional market but a gourmet tapa market with over 30 vendors selling a wide variety of freshly prepared tapas, hams, olives, baked goods and other foods. Beer, wine champagne and specialty drinks.

The San Miguel market had a Mozzarella Bar.

The Mozzarella bar had beautiful tapas that looked more like dessert than cheese.

We love the olives here.

This homely guy is a monkfish. Not sure how it is served. Don’t think I’ll try that one.

Galician sea urchins. I’m sure they are delicious but I’ll pass.

As Sponge Bob would say, “Oh barnacles!”. They are edible. 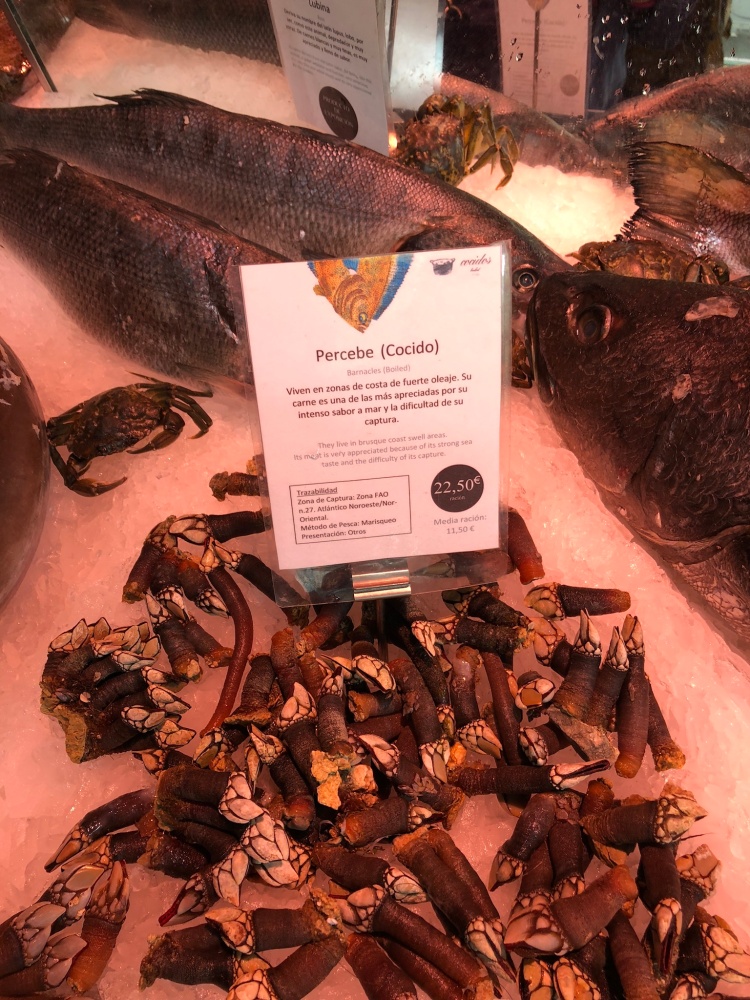 And, speaking of Sponge Bob, these crabby patties look good. 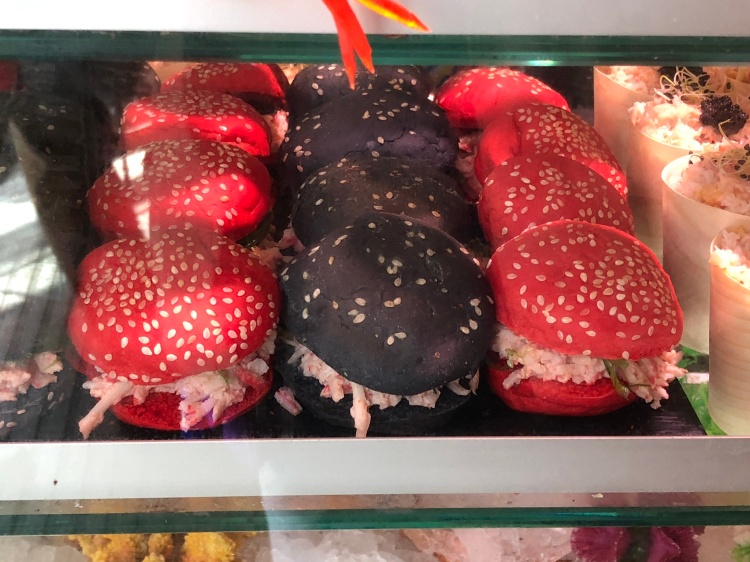 And my favorite … octopus empanadas! Yum!

We managed to grab a table and brought our favorite tapas back to share.

Back To The Hotel

After the market, we went back to the Hostal Persal for a siesta. Our rooms are the balconies with the big wooden figures.

We went to a Holy Thursday procession which was suppose to start at 7:00 pm. We arrived on time but waited another two hours. Big crowds!

The penitents wore gowns and caps that resembled attire worn by the KKK. We haven’t figured out the connection yet but it’s sad that the KKK stole the look from the Spanish Holy Week fraternities and because of that, we Americans associate it with evil.

These penitents carried tall orange candles. It was a windy evening so they had a hard time keeping them lit.

More penitents. They were wearing white gowns that have a green tint caused by a nearby pharmacy light. 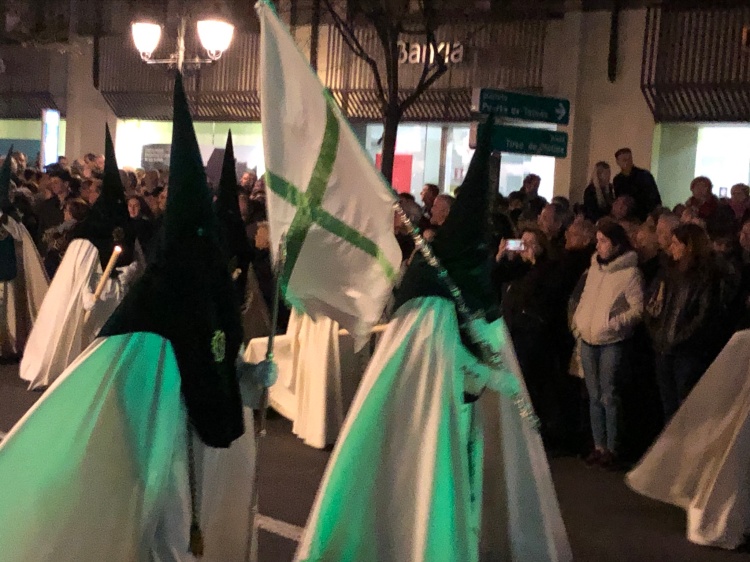 This penitent is carrying a horn. We never heard it but assumed it was used at some point of the procession.

This float depicted Jesus carrying his cross. There were about 20 people hidden under the float who were carrying it.

The clergy walked with the procession.

This is the highlight of the parade. People were screaming out, “Macarena” and “guapa”. According to Wikipedia, “La Macarena is a Roman Catholic title of the Blessed Virgin Mary associated with a pious 17th century wooden image of the Blessed Virgin venerated in Seville. The Marian title falls under the category of Our Lady of Sorrows commemorating the desolate grievance and piety of the Virgin Mary during Holy Week.” 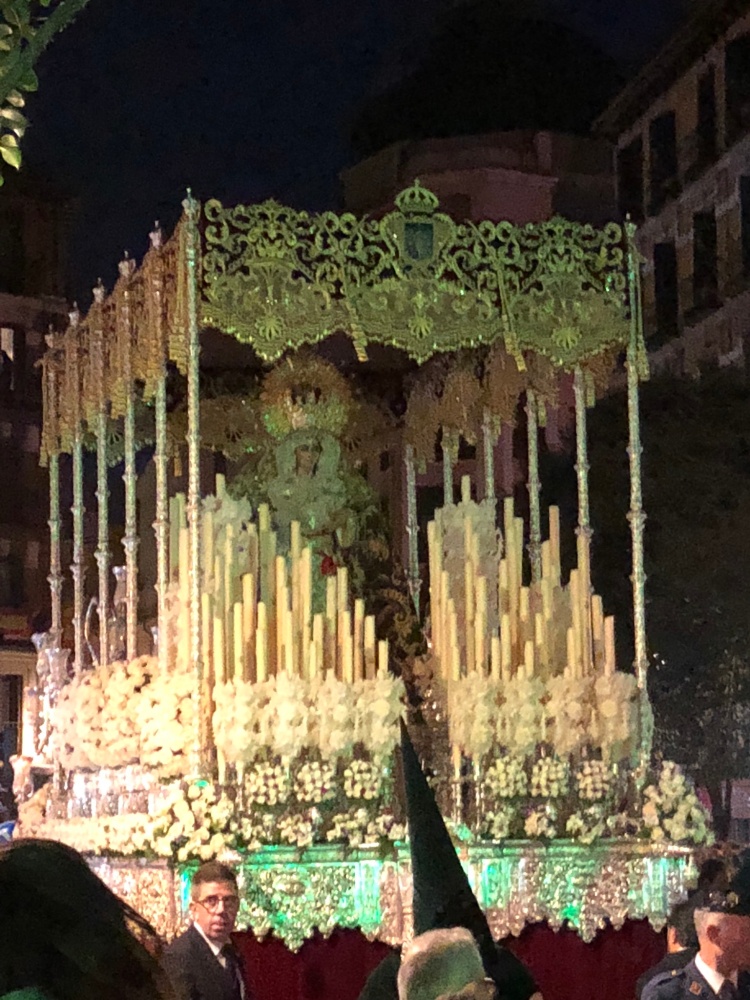 The back of the Macarena had a cape that went down to the street.

A very large marching band was at the end of the procession. 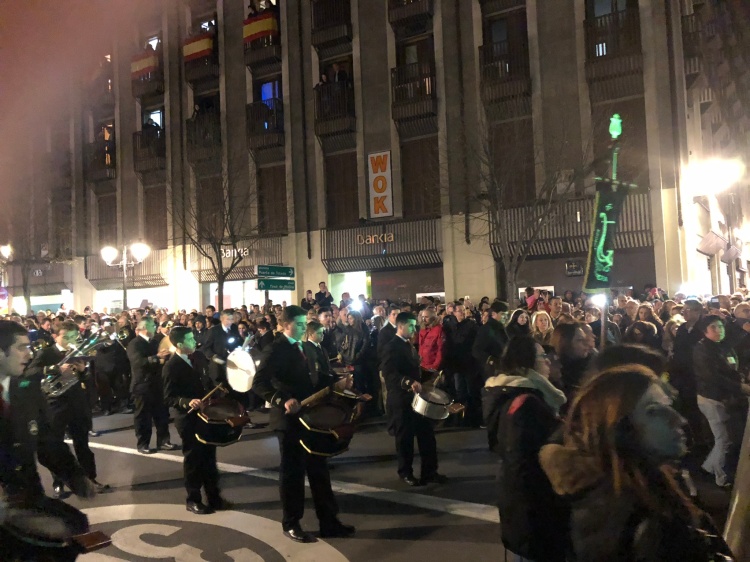 After the parade, we wandered to a restaurant called LaConcha which had been recommended by a couple from Seattle that we chatted with while waiting for the parade to start. In Spain, most of the restaurants don’t start serving dinner until 9:00. We found the restaurant which entered into a small bar filled with people who had been watching the nearby procession. 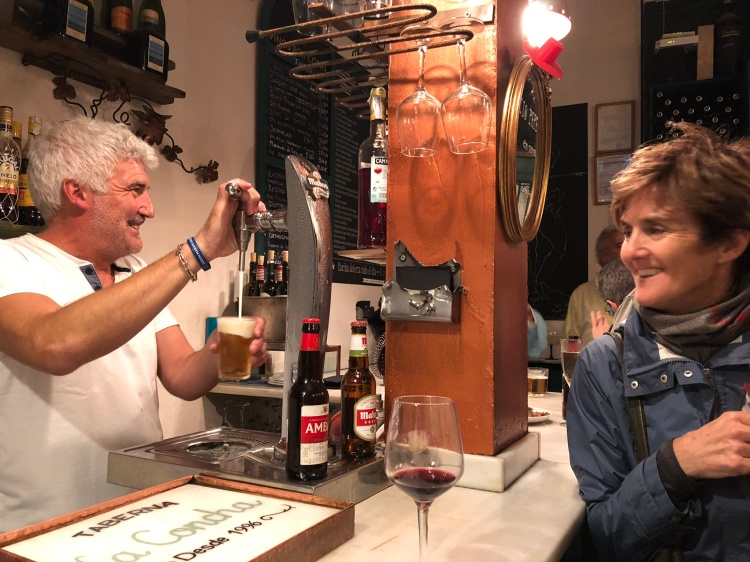 A waitress told us it would be only a few minutes until we could be seated. We found this surprising. Eventually, she led us to the small basement, which had a few tables. We were delighted by the quality of the food served.

After sharing several tapas, we thought we better order a salad. We just picked one without really knowing what it would be. This little stacked version of a Caprese salad made us laugh. It was meant for one person but we split it four ways and we each got a bite or two. Not a whole lotta lettuce in it.

As we were finishing up dinner, we heard loud drumming. To our surprise, another procession was coming down the street. It was about 11:30 pm.

There were several women dressed in black wearing the traditional Spanish comb at the top of their head and it was covered with a very long lace mantilla. 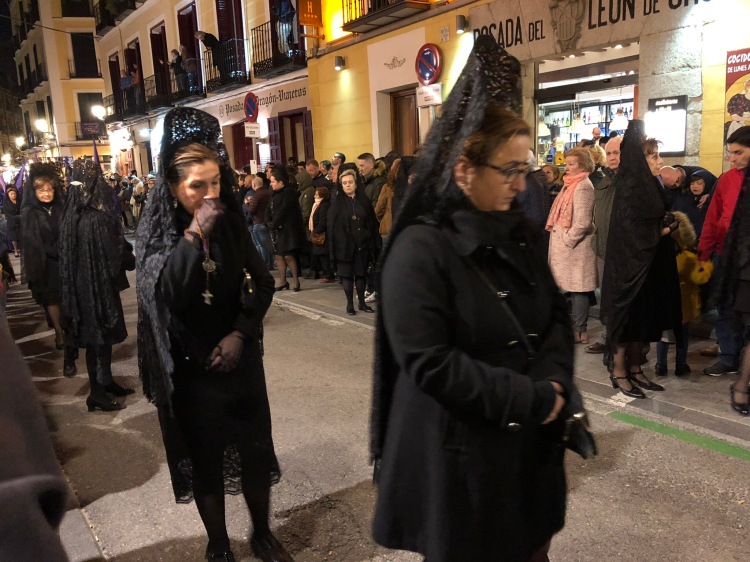 There are also children penitents.

The Jesus float always comes first. These streets are very narrow and they had a hard time getting the float around the corner.

There were a few marching bands in this procession. This one had over 100 people of all ages.

The Macarena float comes next.

There were about 30 people in front of the float and 30 people behind the float holding it up with long wooden carriers. 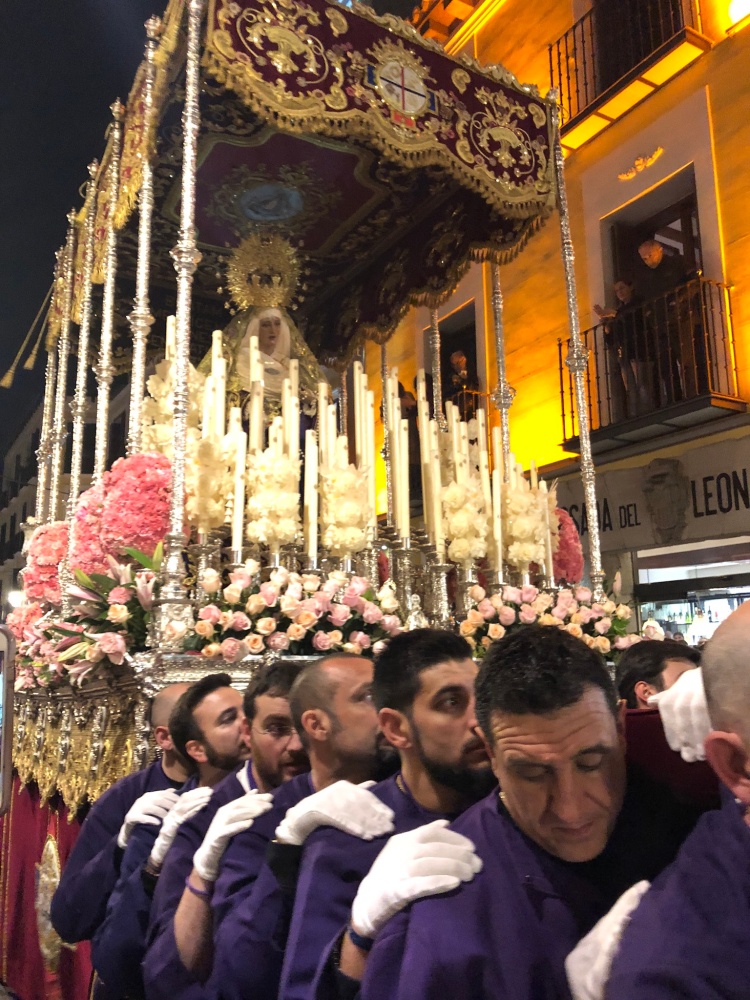 Another marching band ended the procession. 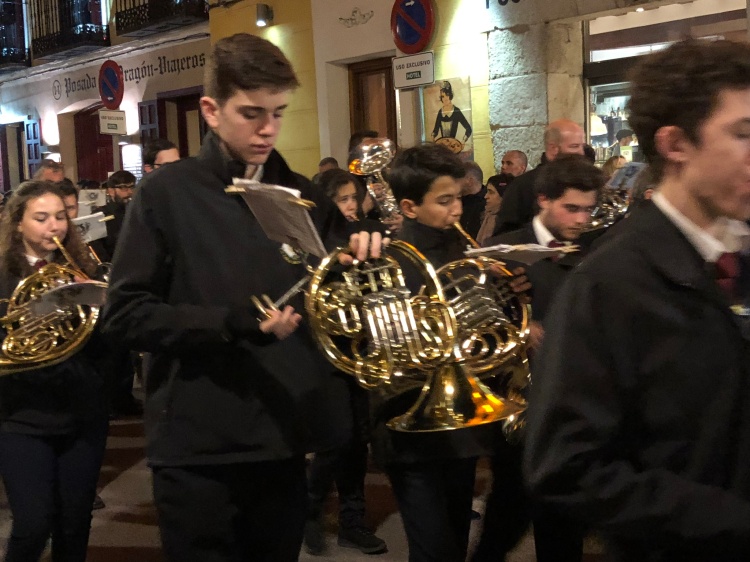 It was now well after midnight. We started walking back to the hotel. Got lost. Jumped on the subway. Found Puerto del Sol. As we were walking to our hotel, we heard drums again. It was 1:30 am and another procession was starting. It was tempting to go follow it but we were so tired. We kept walking to the hotel. What a long day!

2 thoughts on “Holy Thursday in Madrid”