By 7:00 am, Ellen was on her flight back to the United States and Terry’s plane was getting ready to land around 9:00 am. Later that day, we would all be flying to Santiago. The plan was for me to meet Terry at the airport when she arrived to pick up the bottle caps from my collection for Jose, the person who gave me the European bottle caps. Terry was planning to stay at the airport in an “air room” meant for people who had a layover and wanted to sleep for a few hours.

I haphazardly got up around 8:00 am and made my way to the airport. I was not sure where I would find Terry. As luck would have it, I arrived at the Customs exit just about when she was coming through. It was an exciting reunion. In tow, she had the young man who sat next to her on the flight …. David who was originally from Columbia, South America but now resides in Miami. He was on a vacation to Spain by himself and needed to find his way to Puerto del Sol. Terry decided not to do the “air room” sleep option and we all headed into Madrid.

We connected with Peggy and Diane and David joined us for lunch near the hotel. 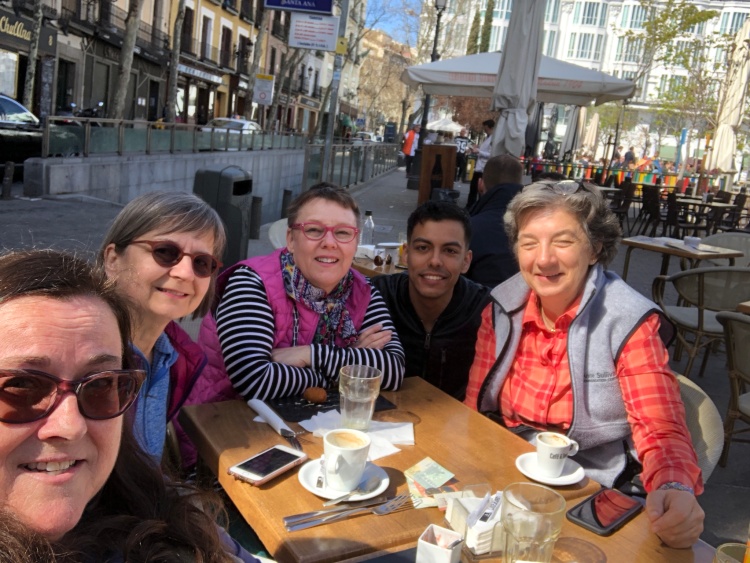 After lunch, David made his way to his hotel and we packed up and headed to the airport via the subway.

It was a one hour flight to Santiago but getting through security at the airport and waiting for the flight took a whole afternoon.

When we arrived in Santiago, it was raining. We checked into the Nest Style hotel — very weird name but a good location. Terry went to bed while Diane, Peggy and I walked around the old part of town. We also went to the Cathedral. Behind the altar shown below is the statue of St. James. He is one of the reasons people walk the Camino. Usually, pilgrims visit the tomb of St. James at the end of their Camino. We were starting backwards.

It was a rainy evening and we all tucked in early. After the long weekend in Madrid, a quiet night was welcome.