We had breakfast with Sophie from Wales. She stayed at the Albuergue last night too. She is a poet and performed a poem for us at breakfast. She is a burst of sunshine on a rainy day! She was heading to Finisterre, the opposite direction that we were going which was to Santiago. 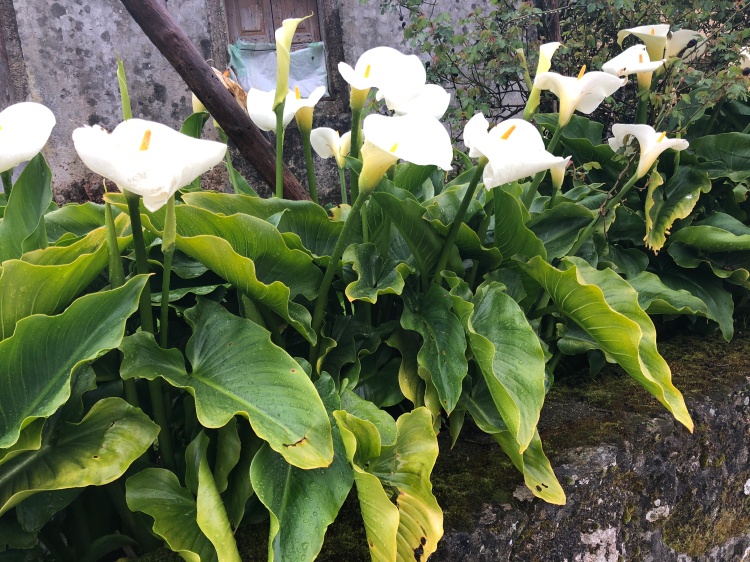 Wisteria woven into the fence had a few blooms starting.

Not sure what this purple plant is but it was beautiful to look at.

The “Pan” Box: Walking down the Main Street of Aquapesada, I noticed that someone had a “Pan” (Bread) box under their mailbox.  I assume they were getting their bread delivered on a regular basis. 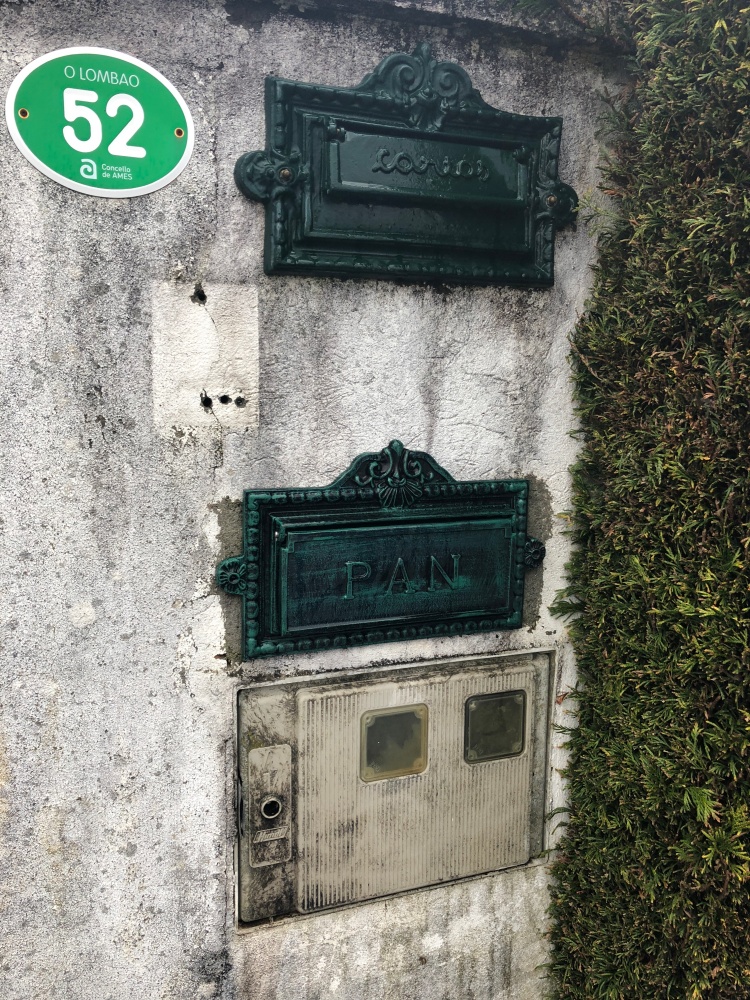 Lots of granite in the area. This business had several granite and stone slabs on display outside their building.

Liked the camino motif on this gate entry of a house.

After walking in the rain for awhile we stopped for tea. We came to the realization that after paying for last night’s albuergue, we were out of cash. We would soon be in Santiago where ATM’s are abundant but for now, we had about 10 euro between us. Most places in this area did not take credit cards.

Interesting place we stopped at … it must have been some type of steak house. They had a huge indoor grill which the man in the red shirt on the right is cleaning. There were several bags of charcoal underneath it.

And who should walk into the restaurant as we were leaving … Mike Finnegan, my “pub cousin” from Langford, Ireland, who now resides in Massachusetts. He said, “America has been very good to me.” He wanted to walk with us but we are heading to Santiago and Mike is heading to Finisterre — opposite directions.

Back on the road … on to Santiago! It’s raining. 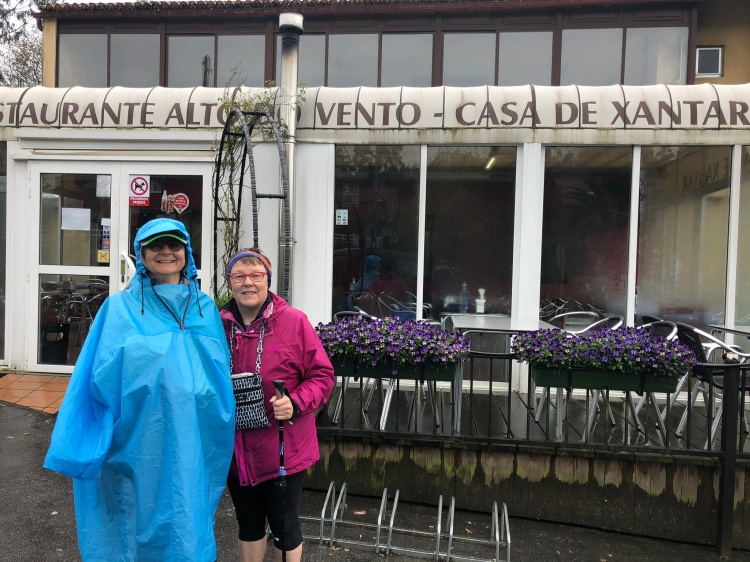 Everything is blooming and it looks lovely and smells fragrant.

Stopped to chat with Alexandro from Monterrey, Mexico.

We had an uphill hike in a wooded area. 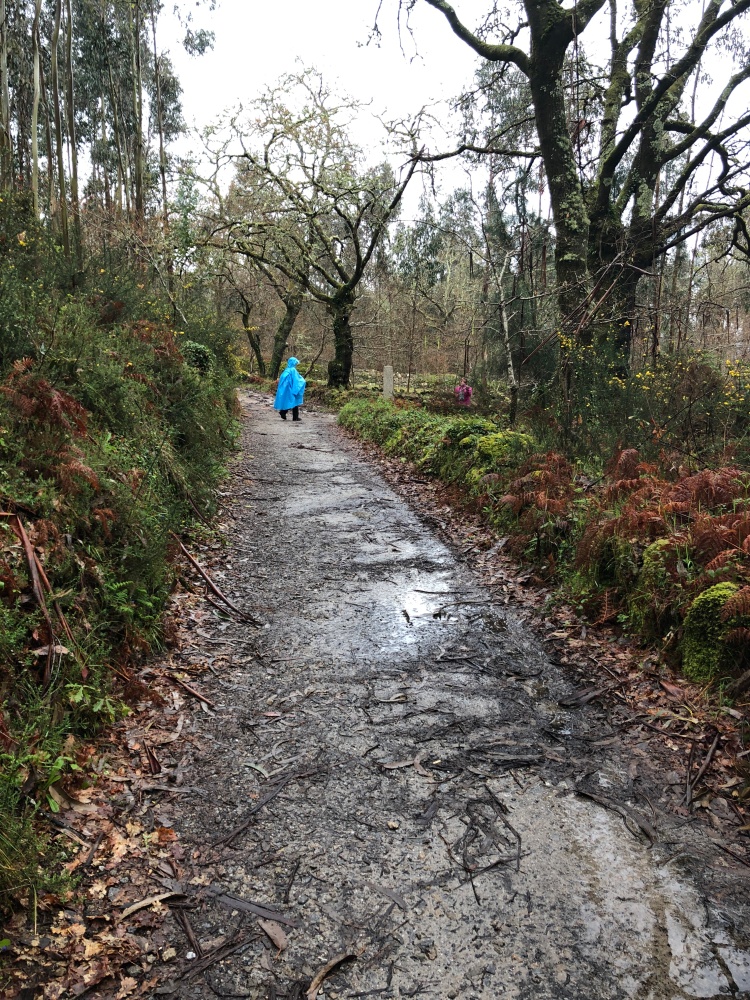 We poor pilgrims had to split a bocadillo for lunch … we each got 1/3 of a sandwich but they are really big sandwiches. Now were down to 5 euros. Wi-Fi available … time to check in with the world.

We crossed paths with Belinda and David from Australia. Even though they were walking on the Camino, they had no idea what the Camino is. They were vacationing nearby and thought it was a nice trail. Terry filled them in with details and they seemed interested in learning more about it.

Up a few hills and around the corner … it was breathtaking and exciting to see our first glimpse of the Cathedral of Santiago. Close but yet so far away.

I like camping but this is a little too rugged for me. It’s been raining for weeks and cold.

Onward! We crossed a river and spotted another tent.

Another milepost. Getting close to Santiago.

As I passed this tent a voice hollered out, “Buen Camino.” I turned around and saw a face looking out of the tent door. Meet Darrin from Holland but originally from Australia. He is camped here waiting for his girlfriend from Holland to join him in a couple weeks. It was damp and cold … don’t know how he kept that tent dry. We said goodbye and as we were walking off he asked if we had a few coins to spare. We had to laugh because we had less than 5 euros between us.

Another village along the way as we closed in on Santiago.

Finally we started entering the city streets. It was a long walk on pavement and our feet were feeling it.

The excitement of reaching Santiago kept us going.

Finally we made it to the Cathedral. Much less scaffolding on it this year. They’re making progress but it’s slow. Not sure if we’ll ever see the finished Cathedral.

Since we walked 120K from Finisterre to Muxia to Santiago, we earned a Compostela. We stood in line at the pilgrim’s office to collect our certificates. It’s kind of like waiting in line at the DMV … very automated. The line was very short (about a half hour or so) compared to the line we had to wait in last summer.

Now that we’re back in the land of ATMs and credit cards, time to celebrate with a gin tonika.

We snacked on Octopus.

Diane wanted to make sure her brothers saw here eating Octopus. She actually is a big fan and enjoys it as much as Terry and I do.

After happy hour, we had shoppy hour. Found a local artisan shop that we really like a lot. The owner got out her glue gun and decor. She gift wrapped everything little thing that we bought. This took forever. Diane and I went next door for a Gin & Tonic while Terry made her purchases.

We didn’t check into the Nest Style hotel until after 8:00 pm. Long day. Terry was feeling tired and under the weather. Diane and I went out for dinner. In the lobby we saw what looked like the Red Power Ranger delivering a pizza. He was traveling on a red motorcycle. The pizza shop he worked for was close to the hotel and it was tempting but we passed. Had a nice dinner at a nearby restaurant. 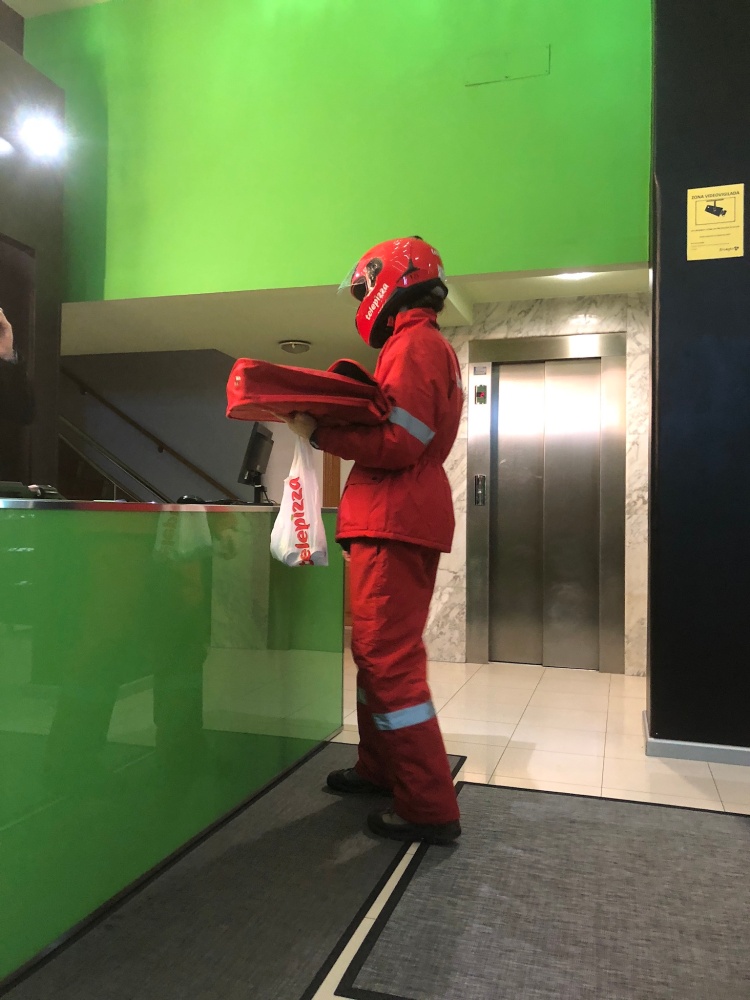 2 thoughts on “Aquapesada to Santiago”