Why are we heading back to Finisterre?? We’ve had to explain this many times. The logical way to do this Camino would be to start in Santiago and walk to Finisterre, then to Muxia and then back to Santiago. Our route was anything but typical and we did much of it backwards. Why?

I guess one good reason would be that we started in Finisterre and that’s where we needed to finish, however, most people do not start in Finisterre. The following is a full explanation of our route. 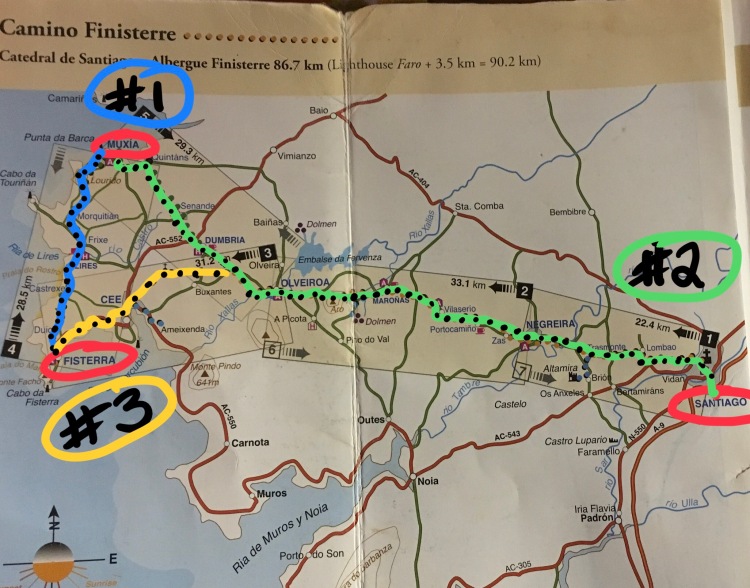 BLUE ROUTE #1: THE MUXIANA: Our good friend Peggy had a limited number of days to walk with us on the Camino before she had to return to her job as a teacher after spring break. I’m sure she would have enjoyed the land-locked towns of Aquapesada, Negreira and Oleveiroa. However, Finisterre to Muxia (blue line #1) would be along the Atlantic and far more interesting. So, to accommodate Peggy, we walked that route and we are so glad she got to see that part … it was awesome. When we arrived in Muxia (#1) Peggy, Terry, Diane and I received our Muxianna certificates. Peggy took a bus back to Santiago. Then flew to Madrid and home.

GREEN ROUTE #2: THE COMPOSTELA: In the meantime, Terry, Diane and I walked back to Santiago, the green route. The three of us walked from Finisterre (Fisterra) to Muxia to Santiago. This was about 120K which qualified us for a Compostela when we arrived in Santiago. It also required that we walk nine days straight and much of it was in cold and rain. Usually, it was a nice gentle rain that lasted for awhile and cleared up. Not so bad but we all ended up with the “Galicia Cough”. We were the traveling Barkaderos.

And here’s where we are now:

YELLOW ROUTE #3: THE FINISTERRE: All we have to do is walk this little yellow stretch which when combined with out backward green route into Santiago, would qualify us for a Finisterre Certificate. We didn’t have time to walk from Santiago to Finisterre, so we went to where the road split rather than duplicating where we had already walked.

We took the Mon Bus from Santiago to the village of Cee (pronounced Thee). 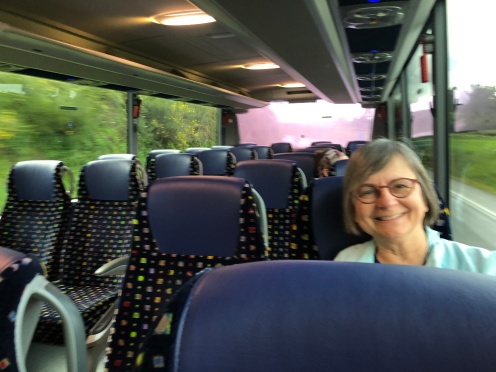 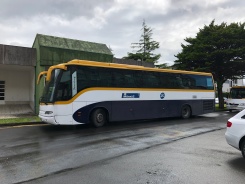 It’s a beautiful ride that goes along the rocky hillside and many beach towns. 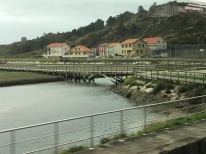 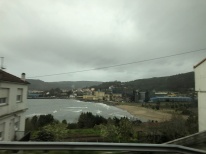 We arrived at the bus station in Cee and we had to kill three hours until our bargain Bookings.com accommodations were ready. Across the street happen to be a spa. We all had manicures and later Diane and I went back for massages. A one-hour full body massage was about $24.

Our bargain accommodations from Bookings.com exceeded our expectations. It was a 3-bedroom, 2 bath apartment and it was lovely. We each had our own room plus a full kitchen, dining room and a great view. We booked it for two nights. 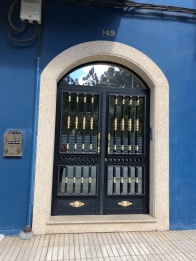 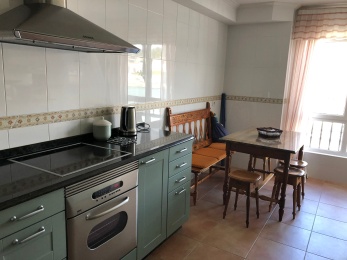 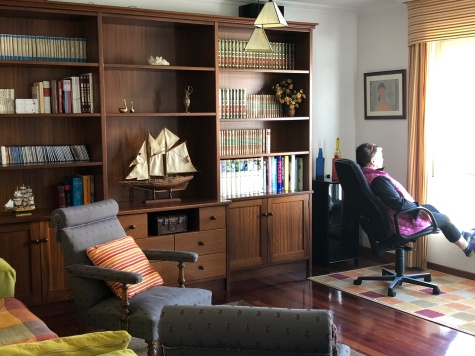 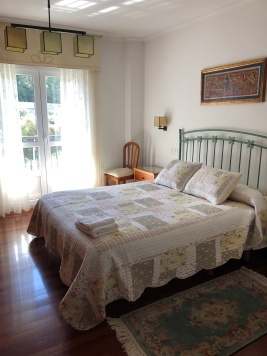 We are entering a new world of tapas here. Everywhere we went, they would bring out a tray of tapas and you could pick one. We offered to buy some but they wouldn’t allow it. Some of the items weren’t even on their menu.

Also found in Cee, is a Chino-Bazaar which we find fascinating. It’s kind of like a dollar store but much much bigger.  Where else could you find a full-size fuzzy deer? We have never seen a real deer anywhere in Spain. 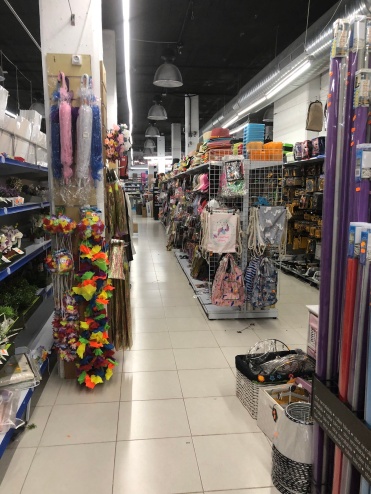 Where else would a homesick Viking fan find her horns other than at a Chino-Bazaar? 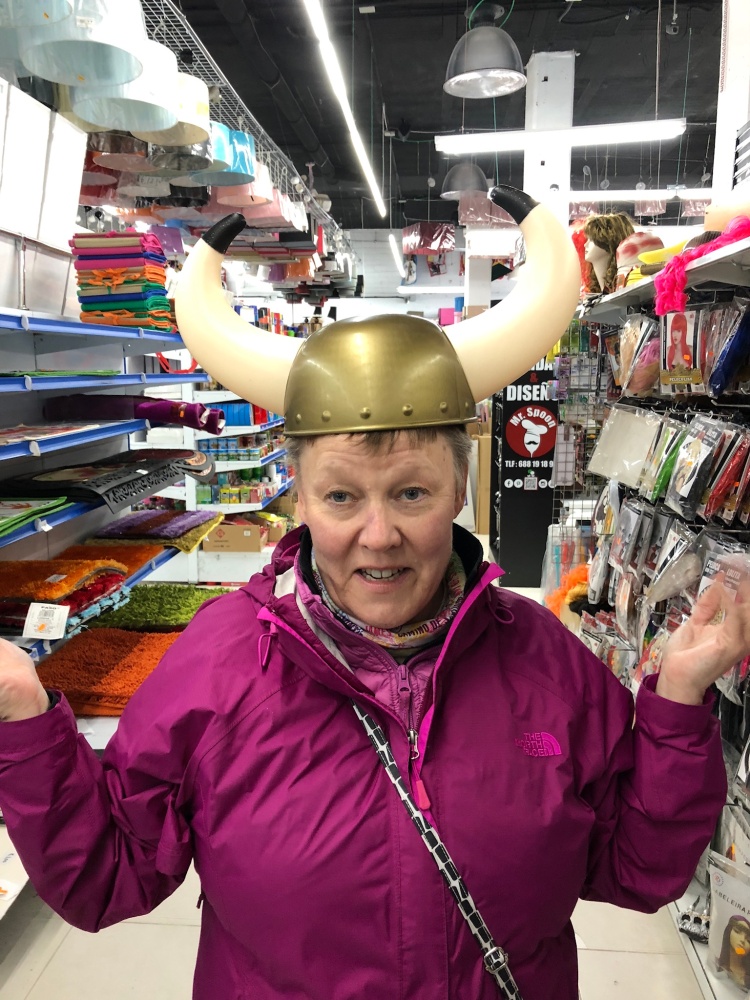 After massages we made our way to the shopping mall and the grocery store. We had too much to carry back to the apartment so we went to the cab stand. We also needed to find a cab to get us back to our hiking start tomorrow morning. We grabbed the first cab in the line.

Turns out that our driver, Carlos, lived in the same building we were staying in. He parked in the underground garage and we chatted for a bit. Shortly, his daughter Katarina made an appearance from the elevator. She was learning English and going to school for some form of Tourism.  Really nice people. Eventually, we figured out they were more German than Spanish.

Easy dinner at the apartment …. salads mixta and pizza.

Another exciting but exhausting day. The traveling barkadaros each had their own room tonight.