There are two days left until we reach Santiago. Obviously, Terry would not be walking the rest of the way. Her walking camino had ended. We talked and she assured me that she would be fine taking a cab to our next hotel reservation and she would ice, elevate and rest. This left me to decide if I wanted to walk the remaining 20 miles by myself — an intimidating thought. I don’t speak much Spanish. I usually don’t pay much attention to the route because I’m slow and I follow Terry. Today’s route was about 6-7 miles, straight through with no stops, no cafe’s, nothing. I couldn’t think of a compelling reason not to walk. So, I walked alone today. 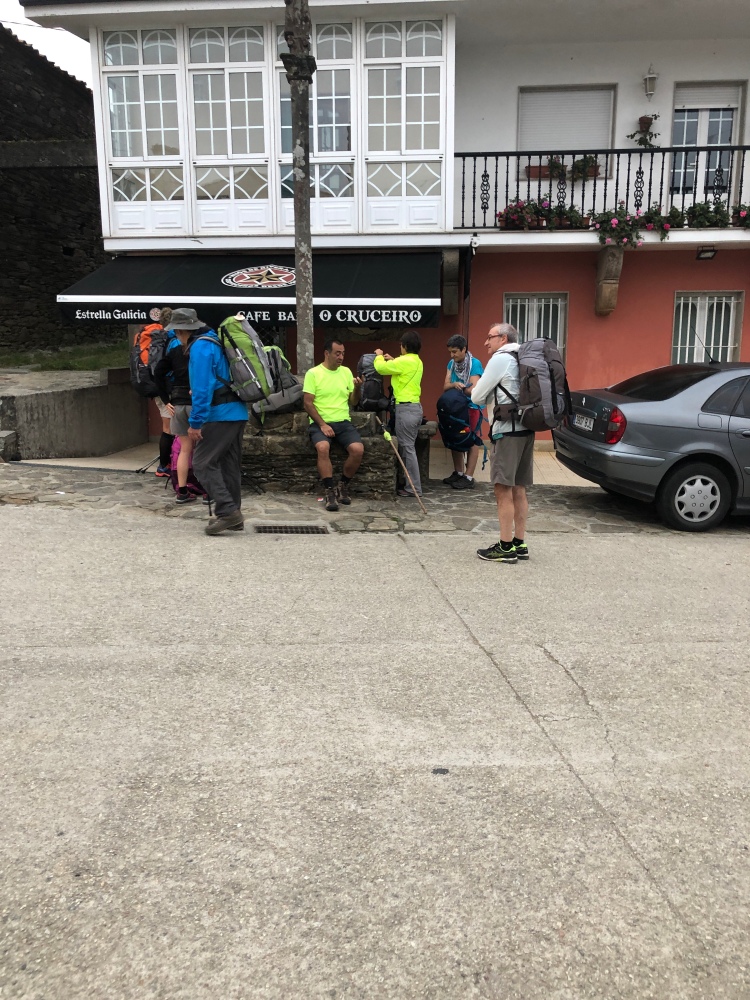 A cab took me to yesterday’s end point, the O Cruceiro cafe bar. There were several people waiting for it to open for coffee or breakfast. They waited a long time. It took them over an hour to catch up to and pass me. 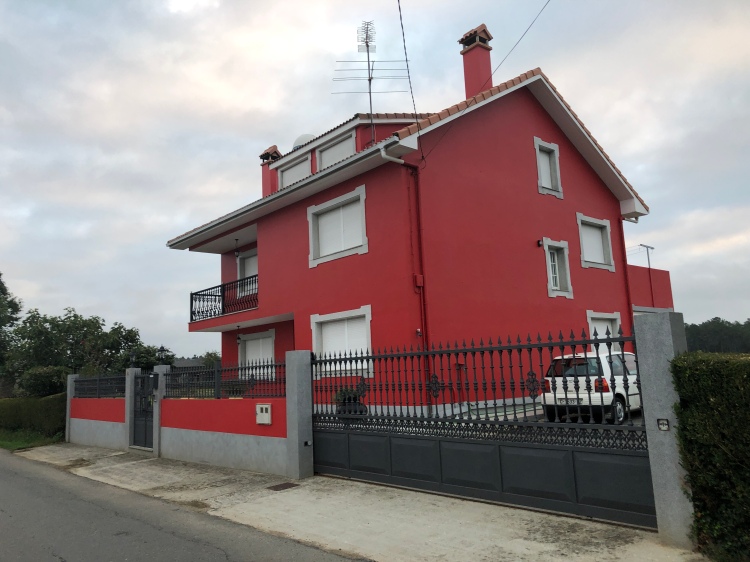 Leaving A Calle, the houses were quite nice and well maintained. 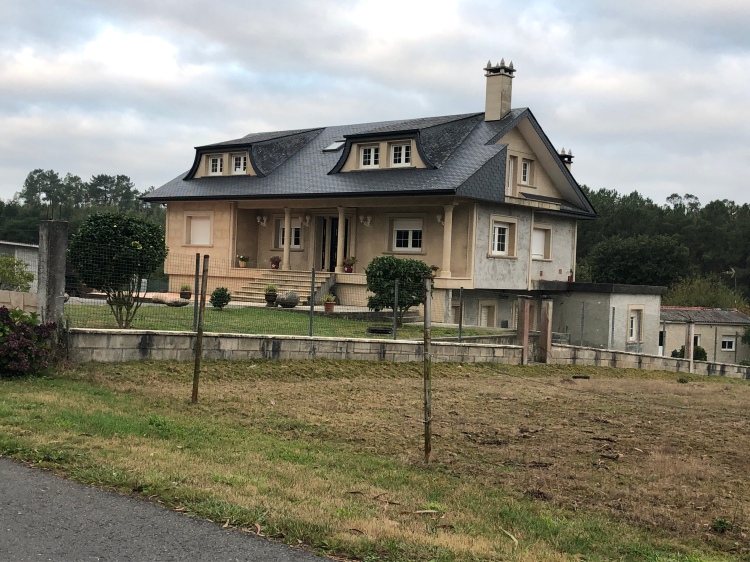 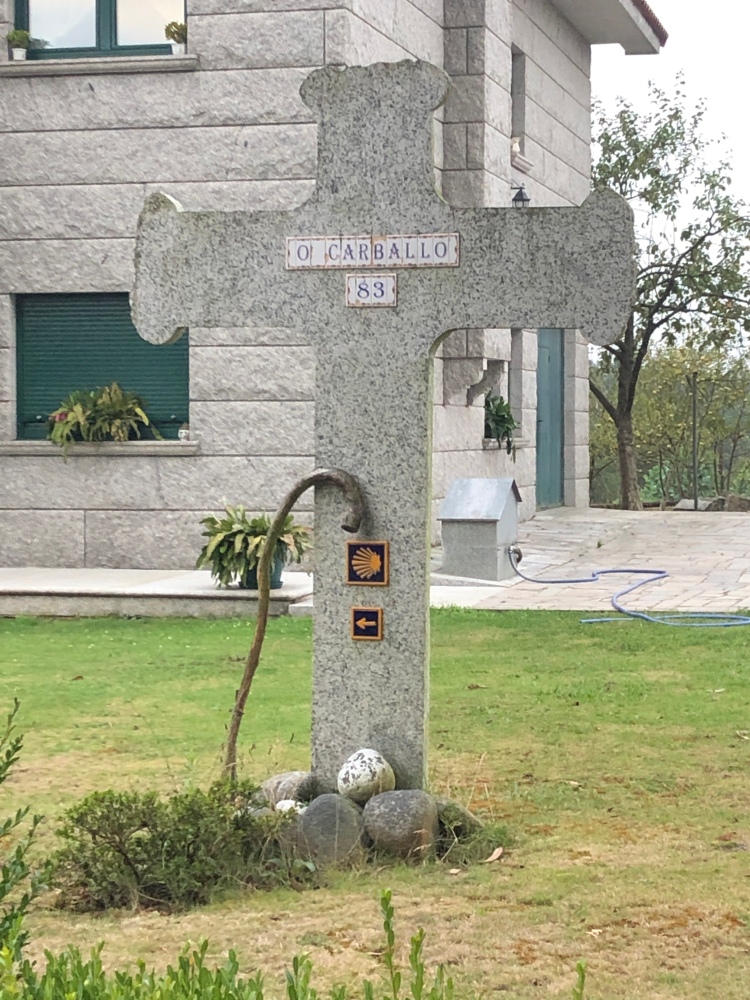 This house had as cross tribute to the camino pilgrims. 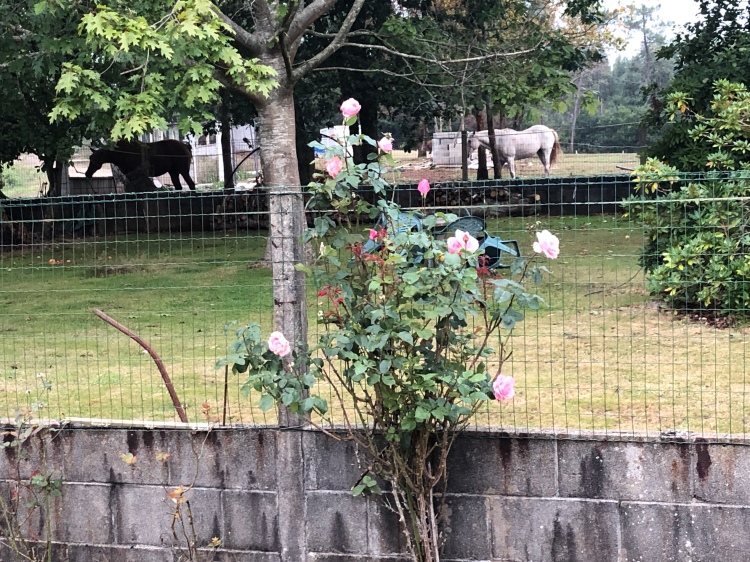 In town house with horses. 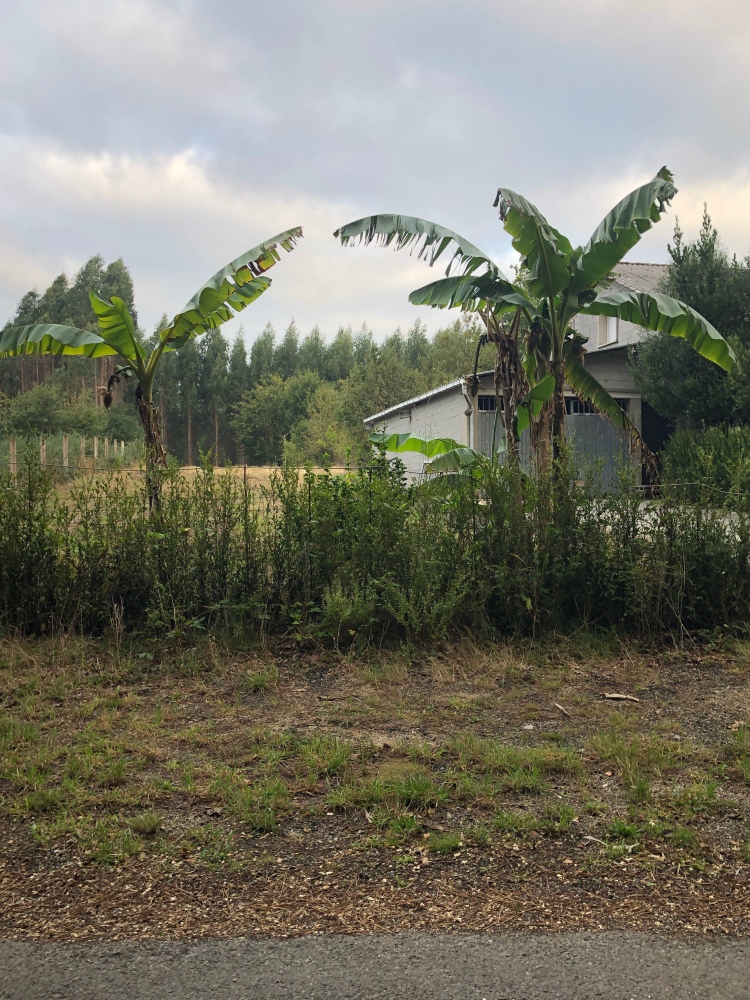 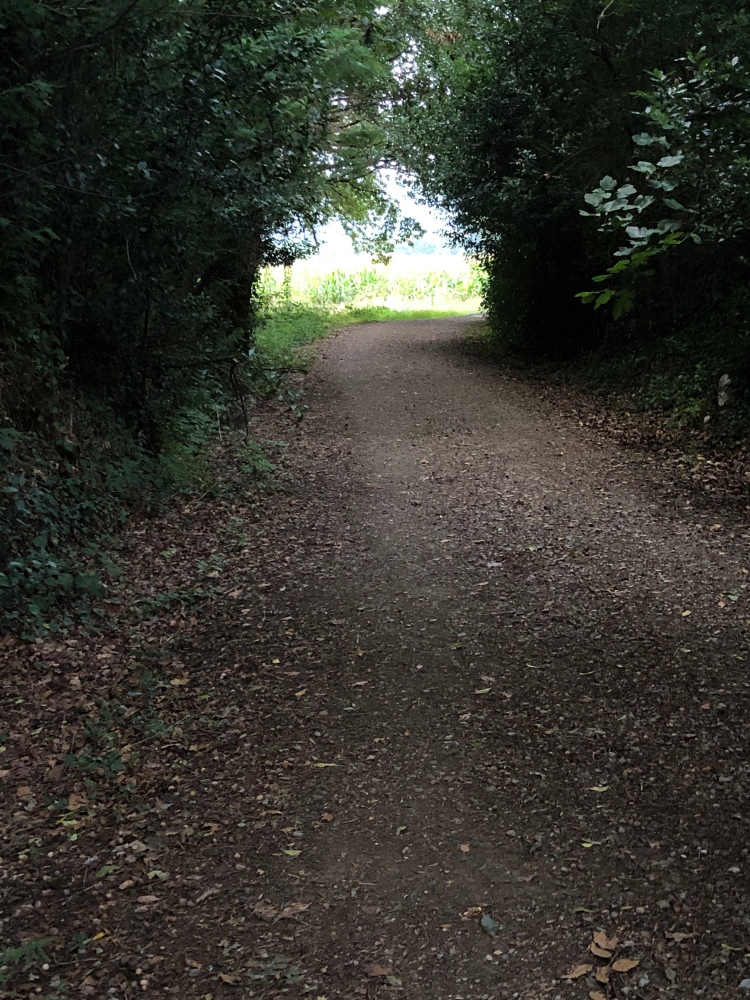 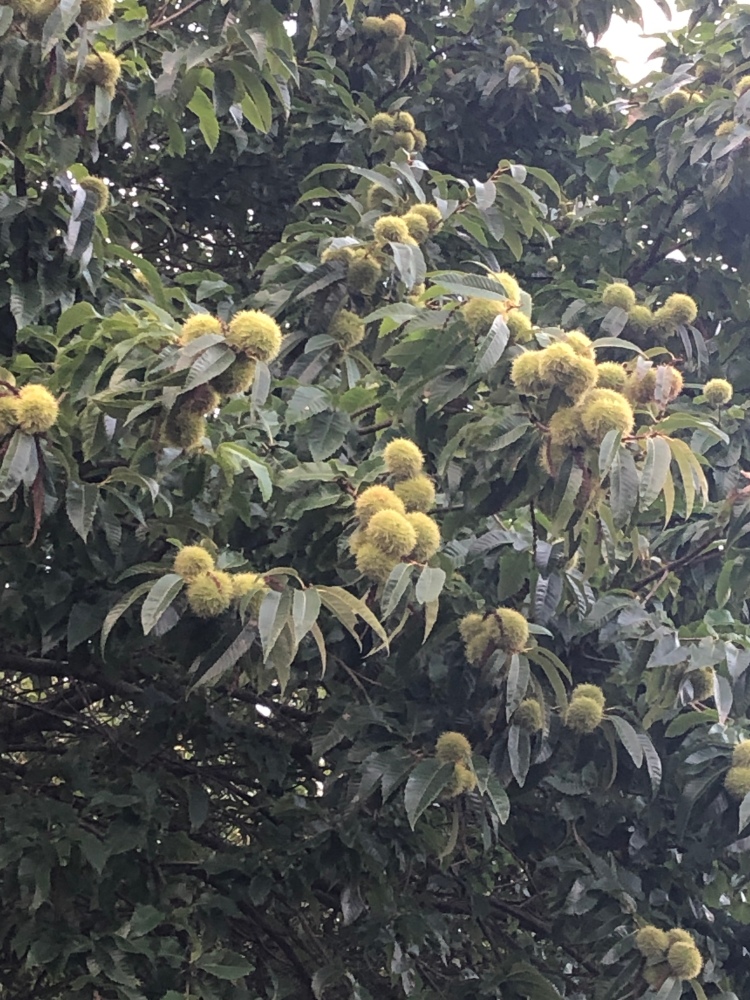 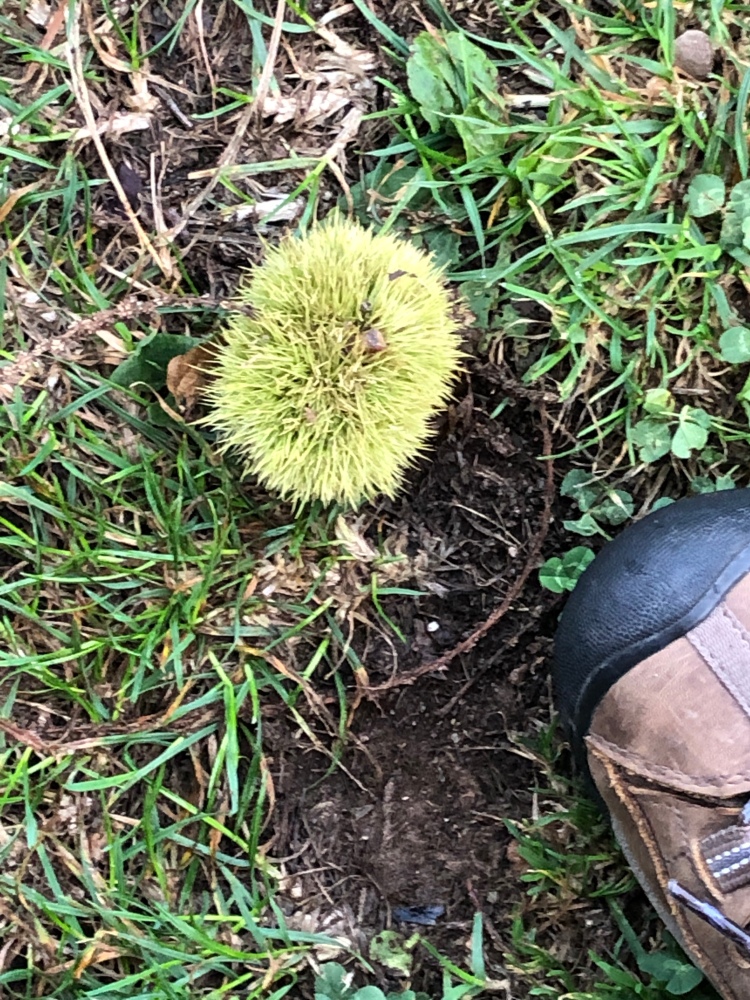 Finally figured out what these trees are … if you break through the fuzzy green shell, it’s a chestnut. 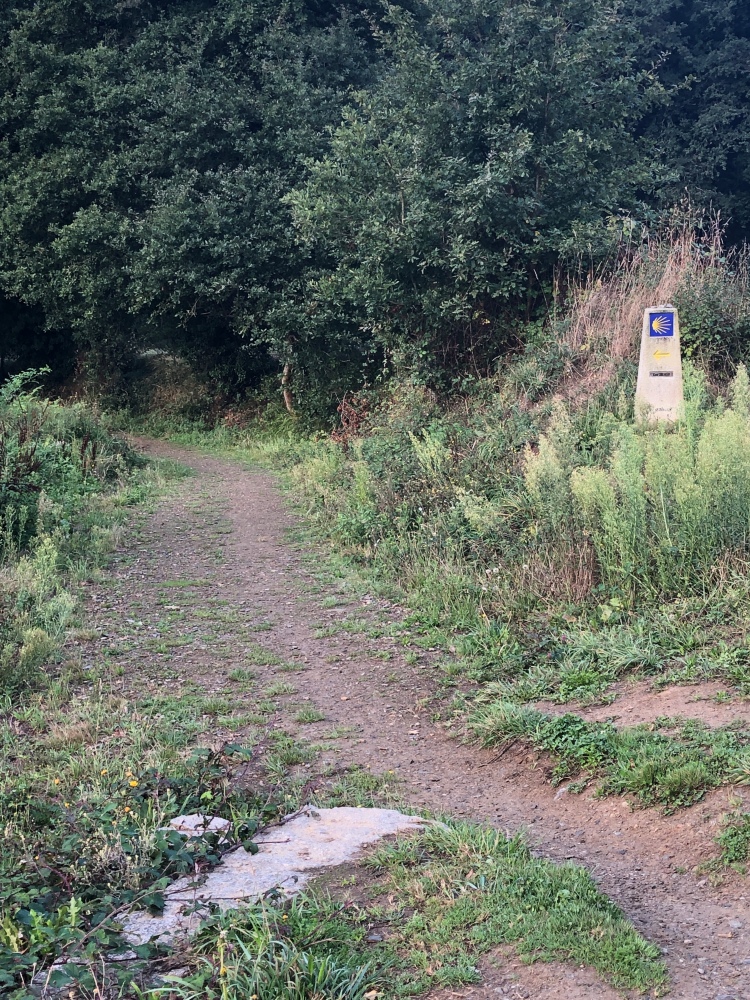 Into the woods. It’s a little bit scary going alone. 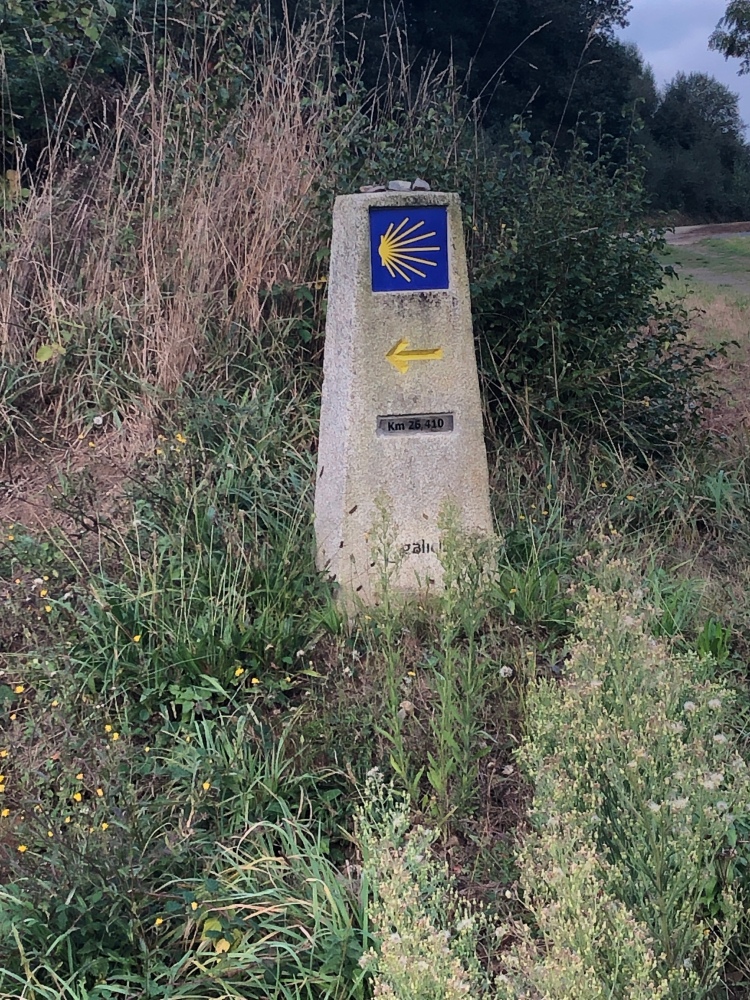 I need to pay more at tention to the camino markers today.

This elf appeared from nowhere. He was very chatty and I couldn’t understand anything he was saying. Either he had a speech impediment or he was speaking Gallego or both. I wasn’t keen about hanging around to figure it out. 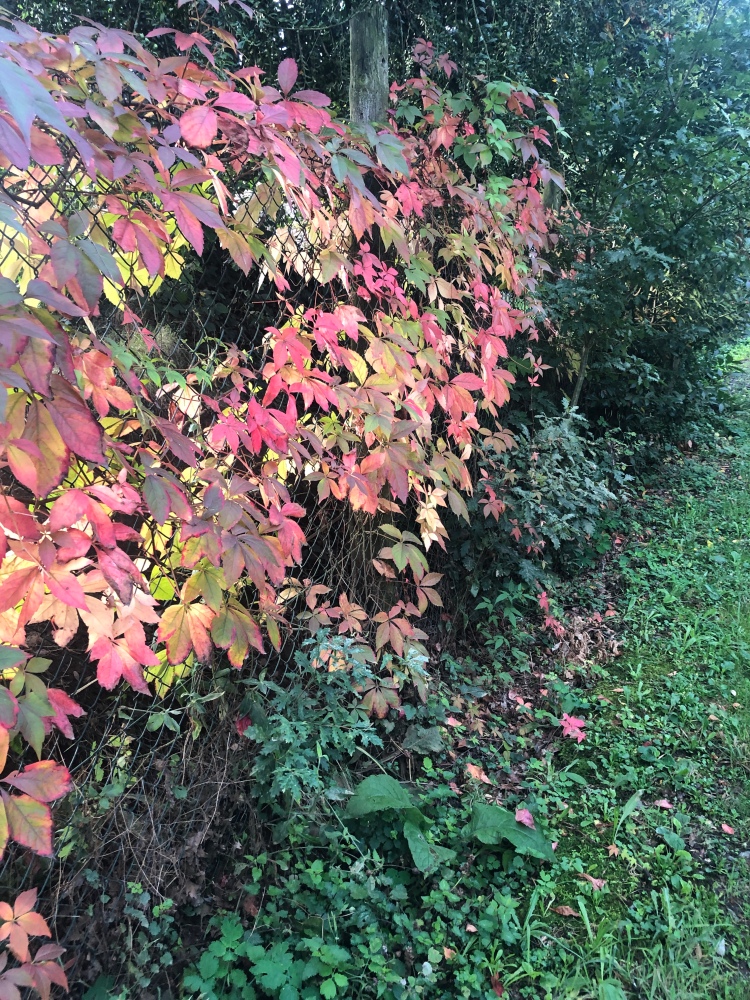 The leaves are changing color and it’s starting to feel like fall. 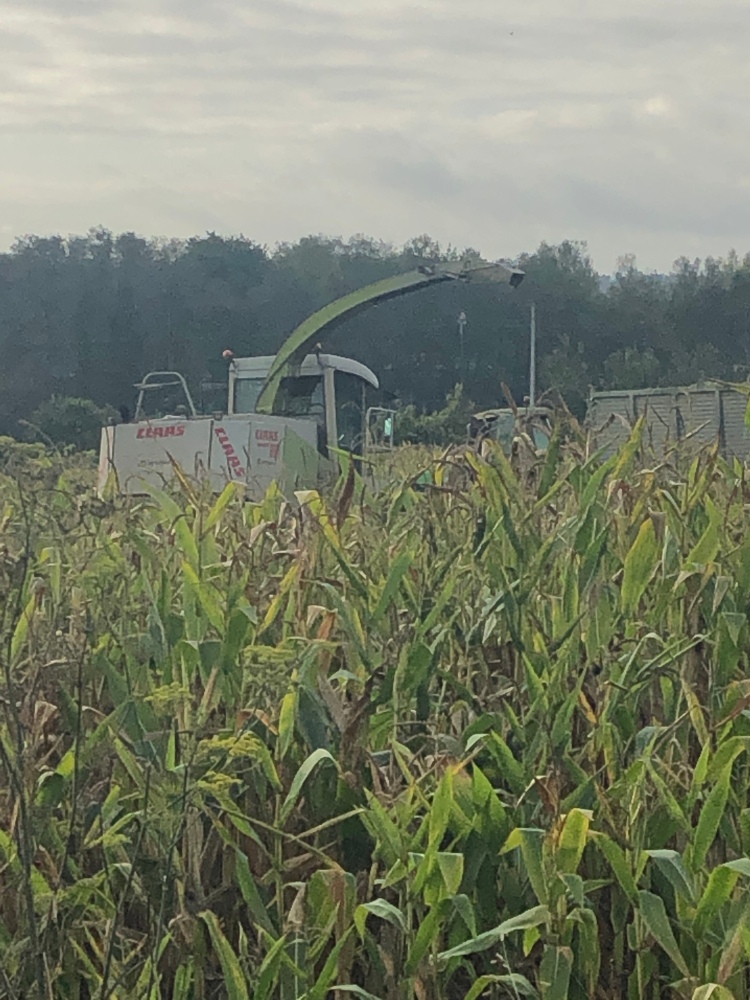 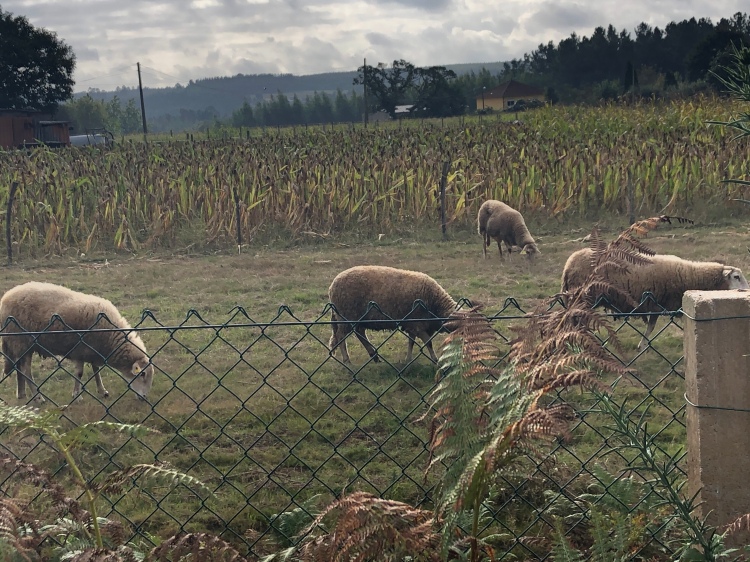 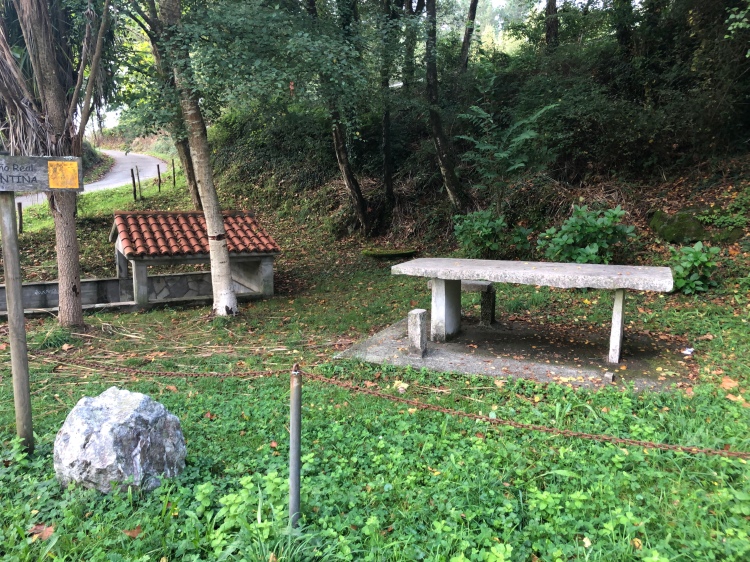 I made it to the first picnic area much faster than I anticipated. Perhaps walking alone made me faster. 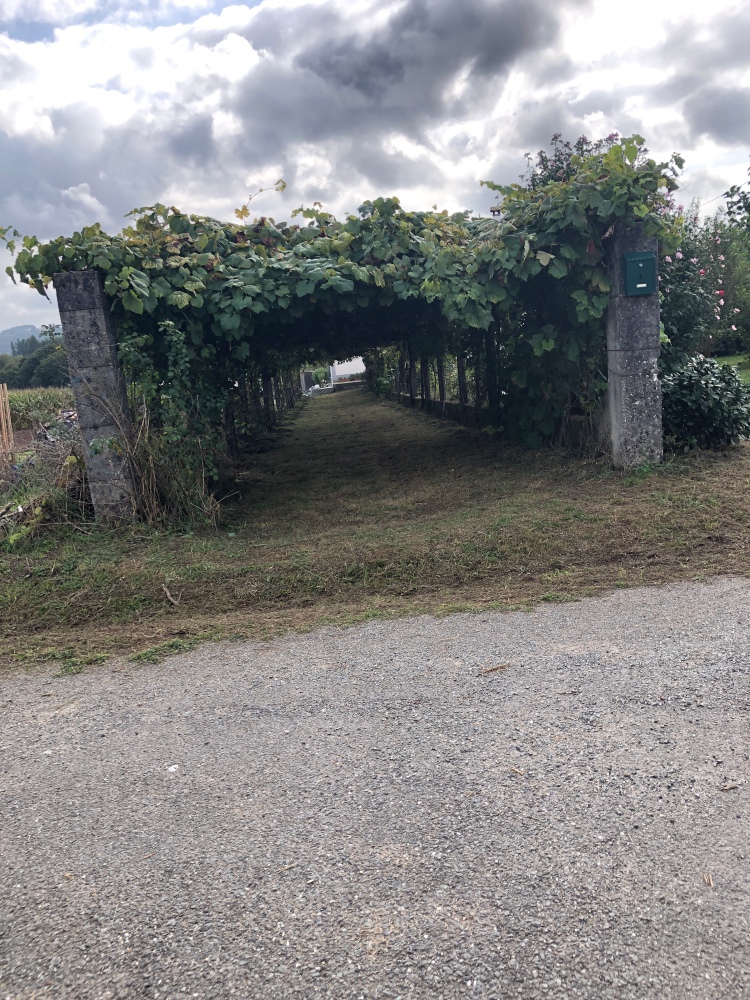 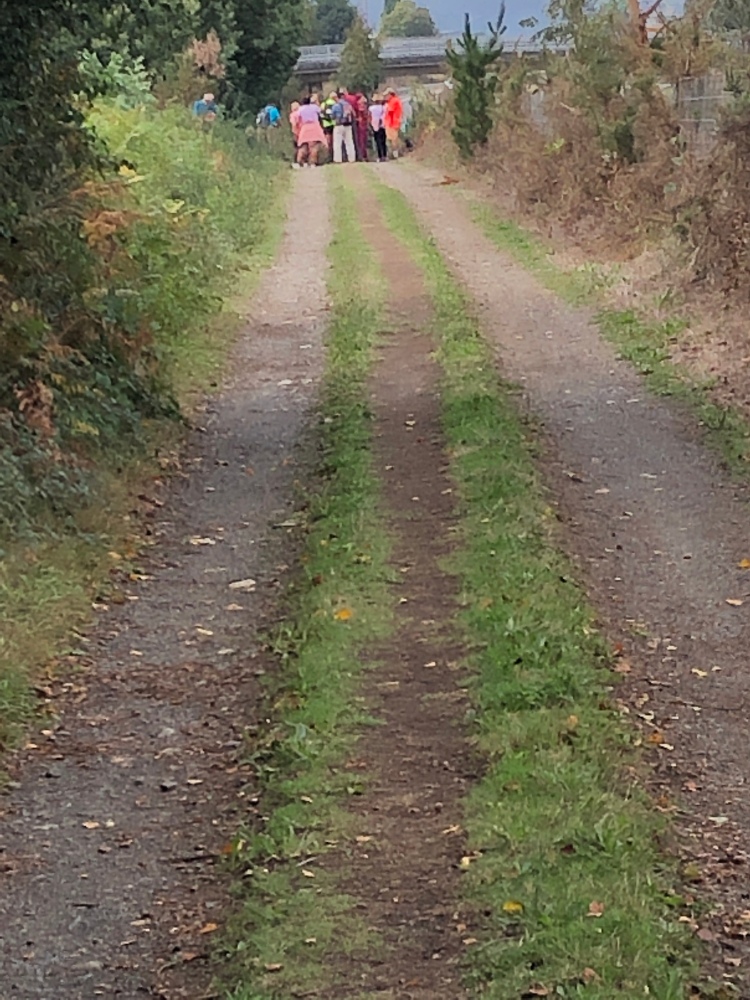 These are the smokers. I kept passing them when they stop for a cigarette break. I later found out from an English speaker in their group that they are retired Spanish military, mostly generals and colonels. They are walking Camino Ingles section by section. Every night a bus picks them up and they return to their hotel in Ferrol. The bus brings them back the next day to their starting point. I think the four men from Majorca that we met in Neda are with this group. 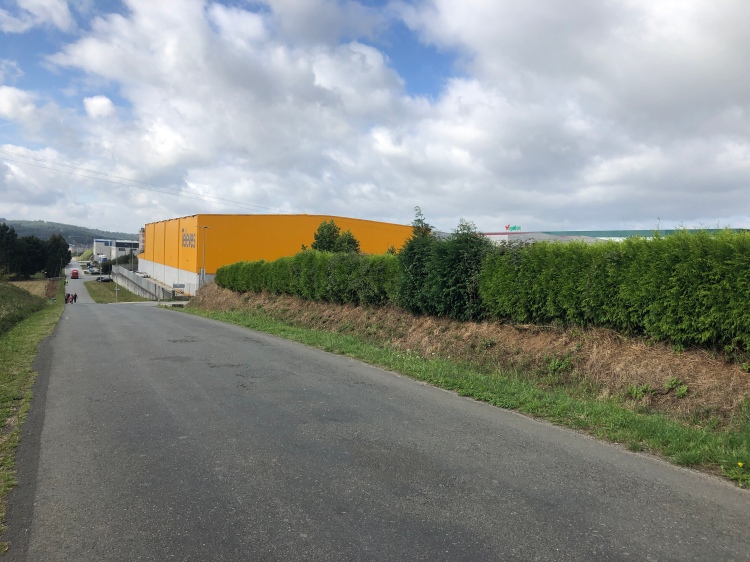 There is a long stretch of industrial buildings going into Sigüeiro. 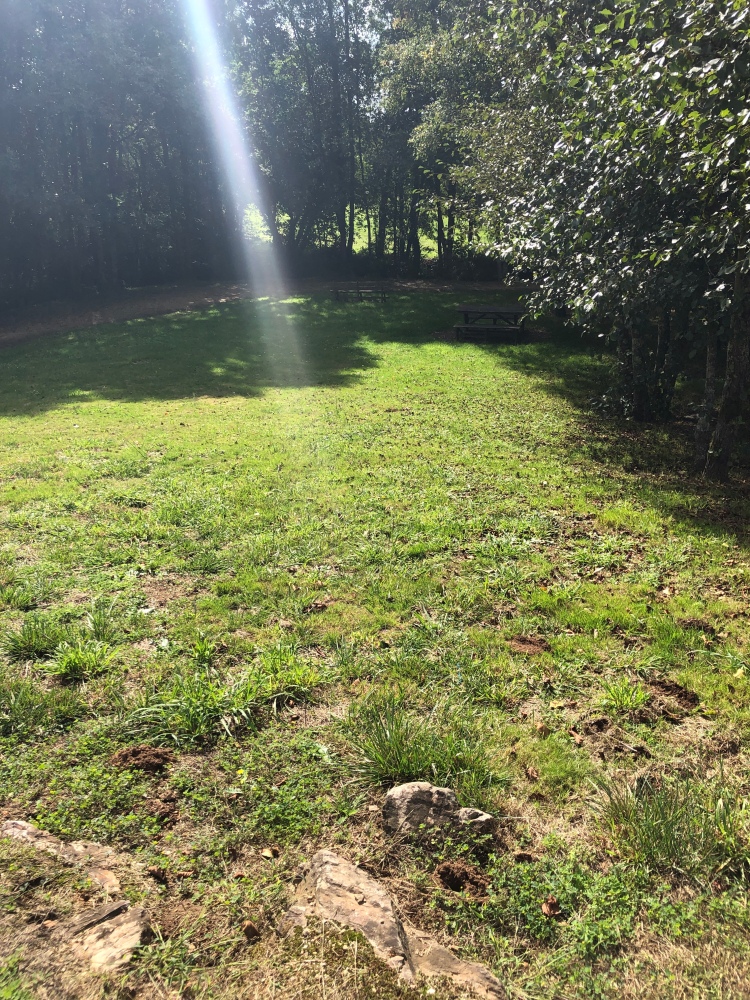 There were no bathroom stops between A Calle and Sigüeiro. I wanted to find a secluded tree but pilgrims on the Camino kept coming to rest in the park which made it impossible. 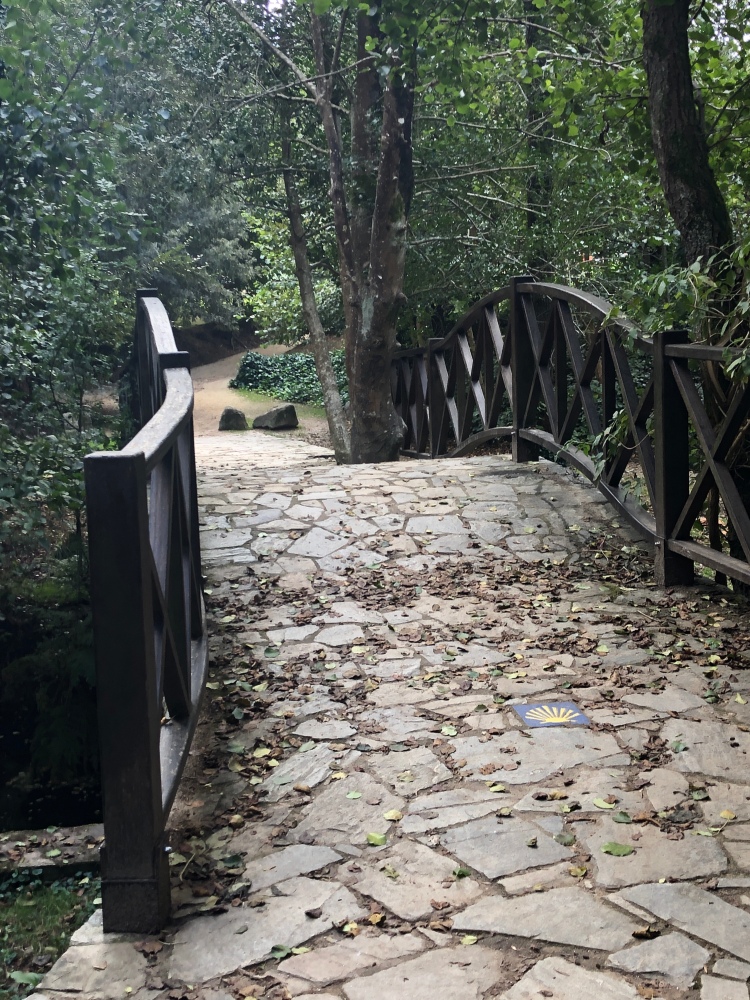 I’ve reached Sigüeiro now and on a park path into the town. 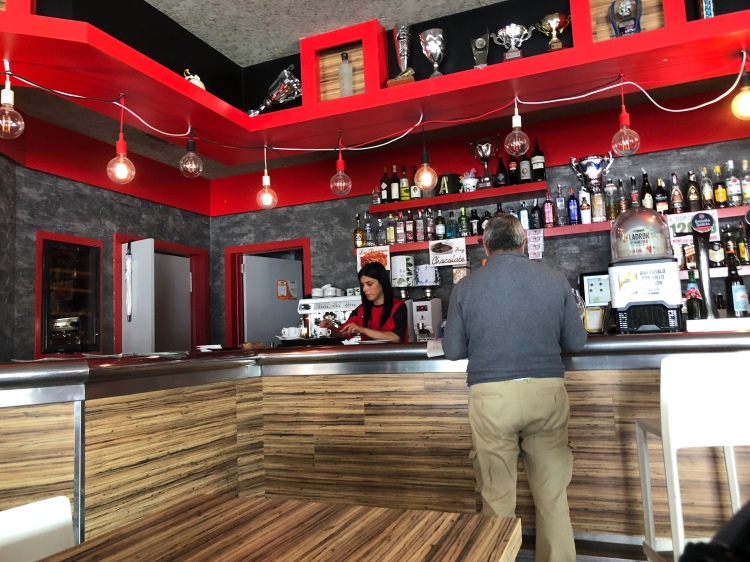 I needed to get a stamp for my credential so I stopped at this cafe/bar. The server behind the bar was “in a hump” as a British woman commented to me. She was the only server working and there were many customers and dirty dishes everywhere. The British woman called out to her in English. The server snapped backed in English, “I only speak Spanish” and continued in her frenzy. Thank goodness I knew how to say, “cerveza por Favour”. 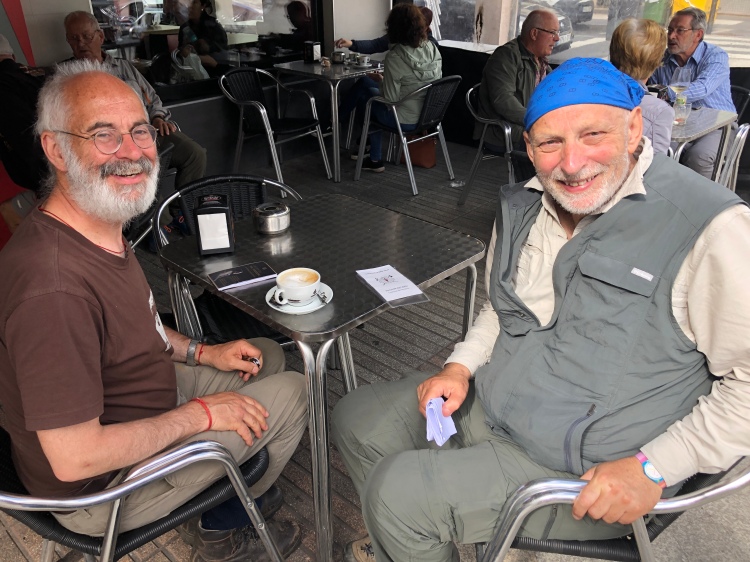 These delightful people struck up a conversation with me. Terry, the guy on the right and David, the guy on the left, had seen me wandering and wanted to know why I was alone. I think they were going to ask if I wanted to join there group. I told them about Theresa’s accident and they were very sympathetic. Now that I reached Sigüeiro I needed to find Theresa. 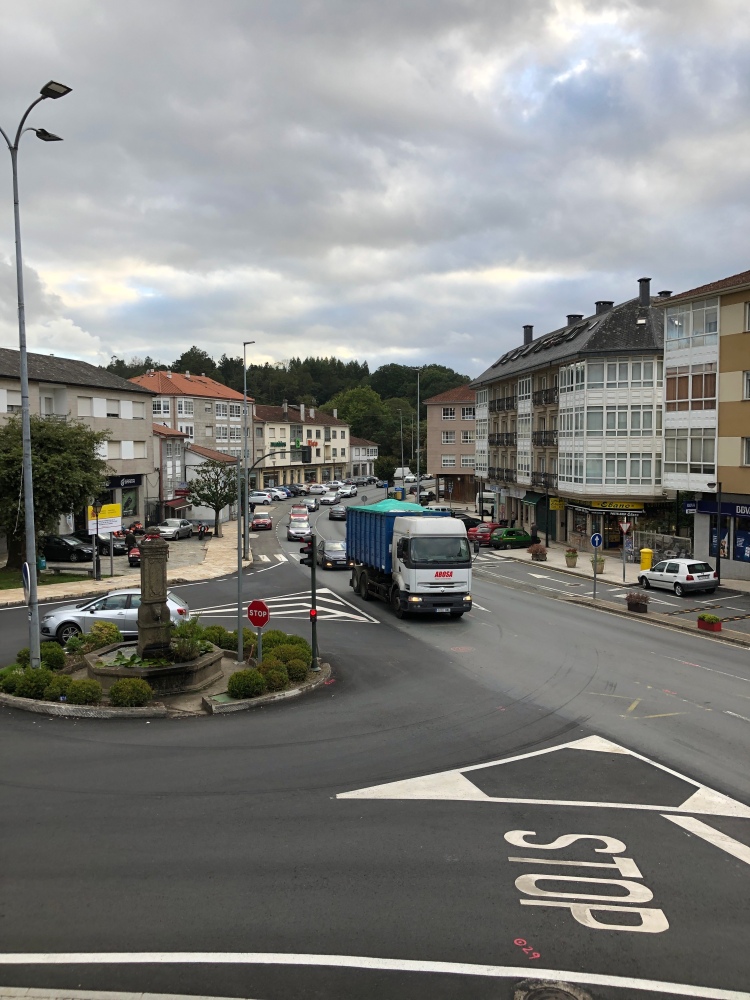 Into Sigüeiro. I needed to find Terry. And I did. She was the in the cafe at the albuergue we plannned to stay at. The taxi brought her there and poor Terry had to sit for hours and wait for me to arrive. We had lunch and got settled in our room.

I told her about the shoe store I saw on the way in. She got off her death bed (hahah) and wanted to crutch to the store. It was very close. 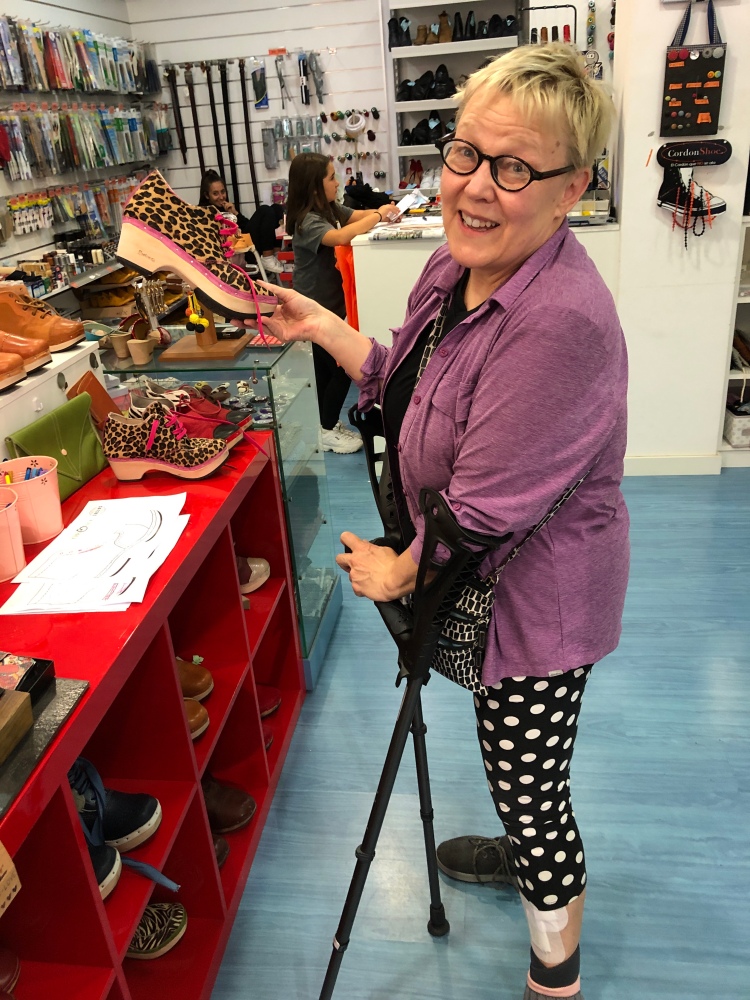 We loved the store. Everything is hand made.

These boots are a Galician style and found only here in Galicia. 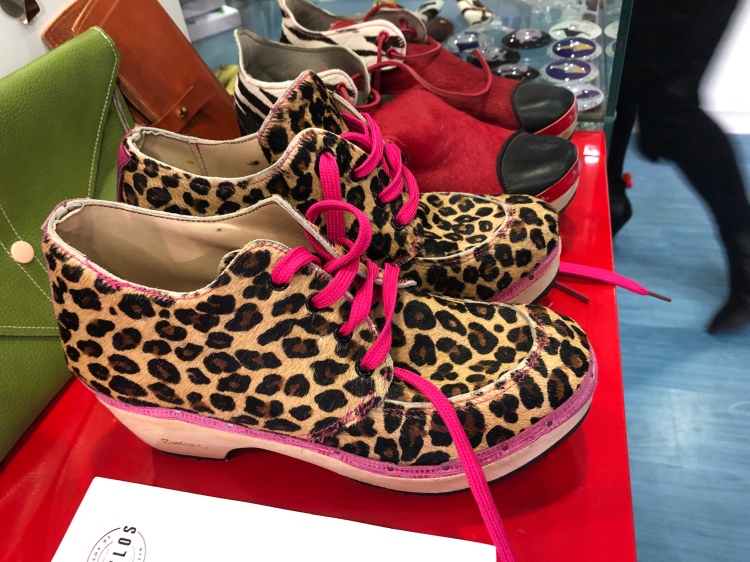 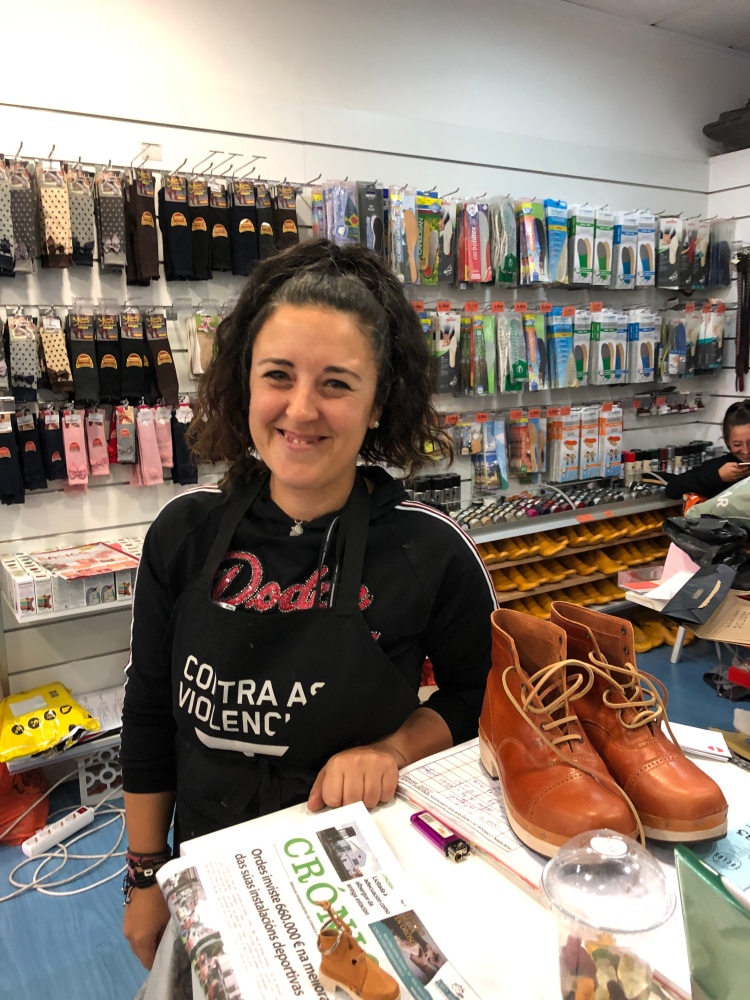 This is Ava. She made the boots. How often do you get to meet the person who made your shoes. Terry did buy some boots. 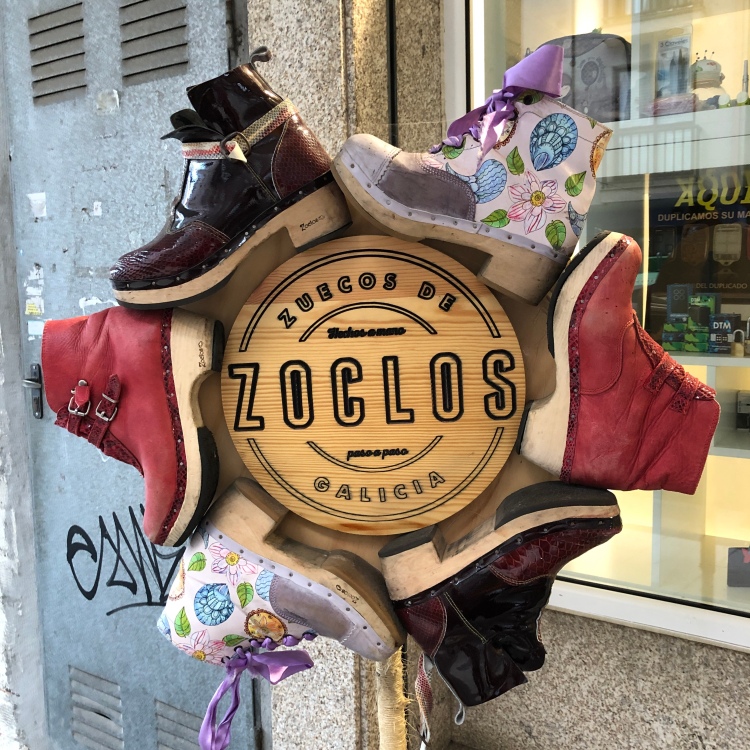 The store had such style … it was lovely!!! 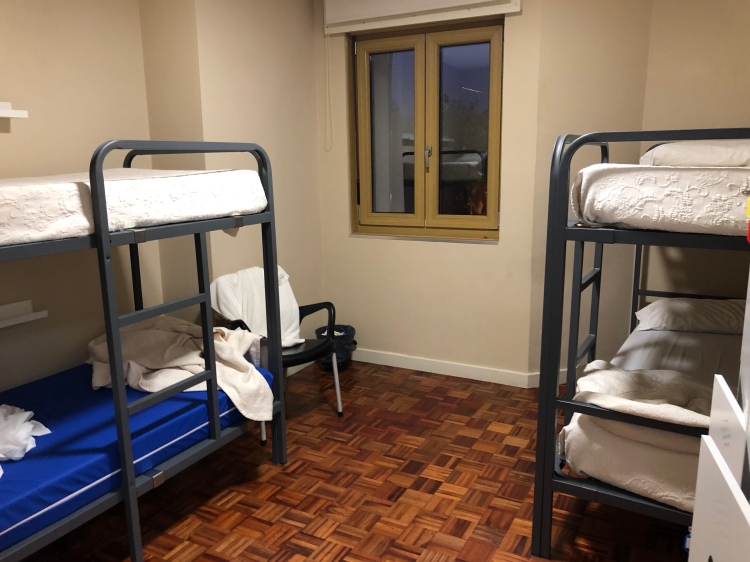 Unfortunately, we had booked an albuergue. With Terry’s accident, we did not feel like sharing space with the world. The woman running the place put us in our own room even though there were two bunk beds and she could have squeezed two more people in. We were thankful. 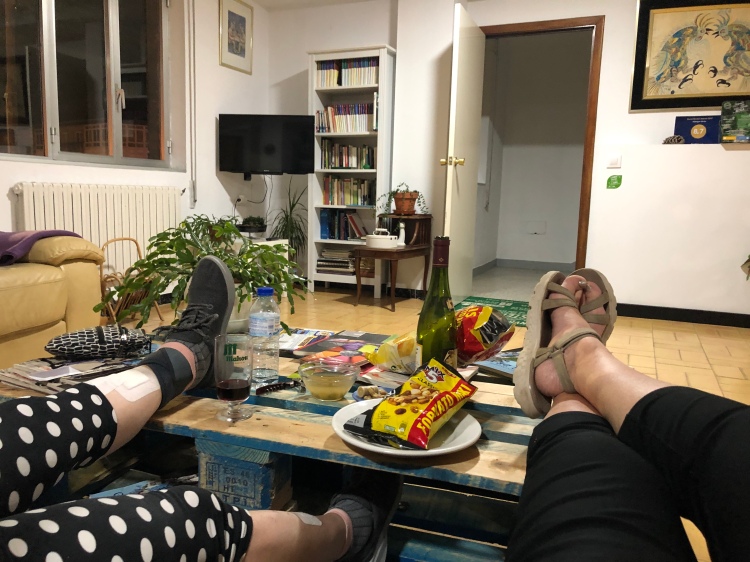 Terry was still feeling a bit down and out, so I bought a few things at the Gadis grocery store for dinner. We had a bottle of wine, a bag of Mister Corn, olives and chips for dinner.

2 thoughts on “A Calle to Sigüeiro”