Feeling a bit apprehensive, I got ready to walk the last 10-15 miles of the Camino into Santiago. Yes, I was spoiled because I always followed where Terry went. Now I had to think for myself and be cognizant of the trail markers especially when entering Santiago. Last Camino when we walked into Santiago from Camino Finisterre, we had a difficult time following the signs.

We are in the municipality of Oroso which has a lovely logo. (The last municipality was Ordes.) It’s been difficult to figure out how the autonomous community of Galicia is pieced together.

The map is of the province of A Coruna with its municipalities. A Coruna is a province in Galicia. I’m thinking it would be similar to our system of counties.

Terry’s new boots were mailed home this morning. With crutches, she would have enough of a challenge transporting her backpack to Santiago. 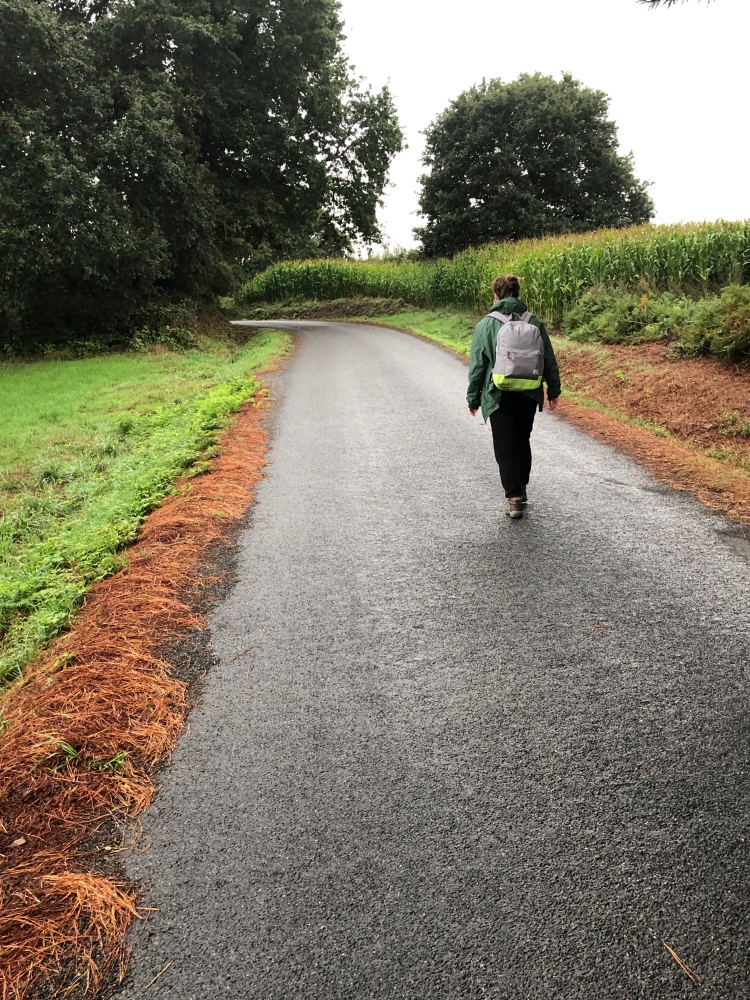 Back on the road again. The Camino Ingles did not have much pilgrim traffic this time of year.

This is first snail I found that had a shell. Kind of like a backpack. Being a slow walker, I appreciate what snails go through.

This is somebody’s scary scarecrow. I wouldn’t want to cross paths with it at night. 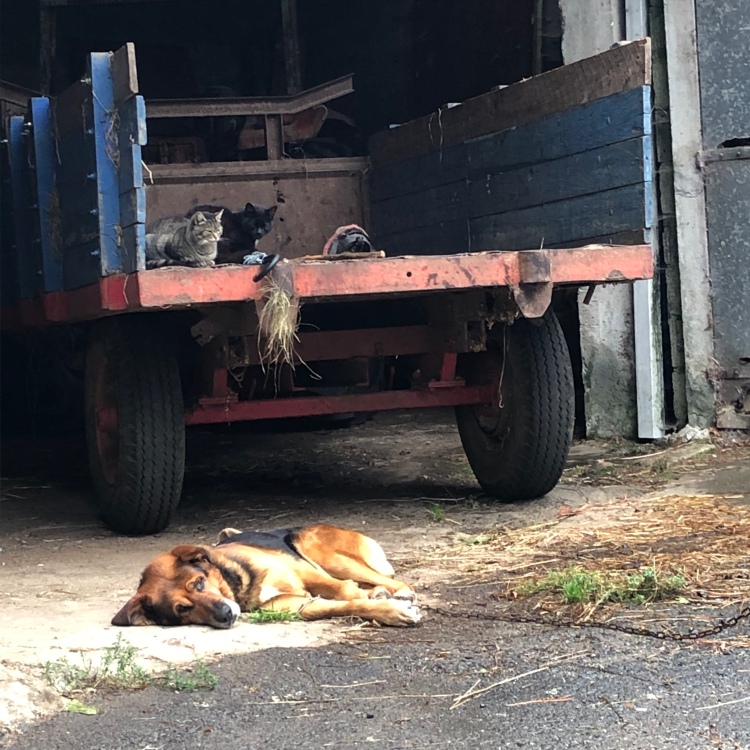 Lazy day even for the cats and dog. 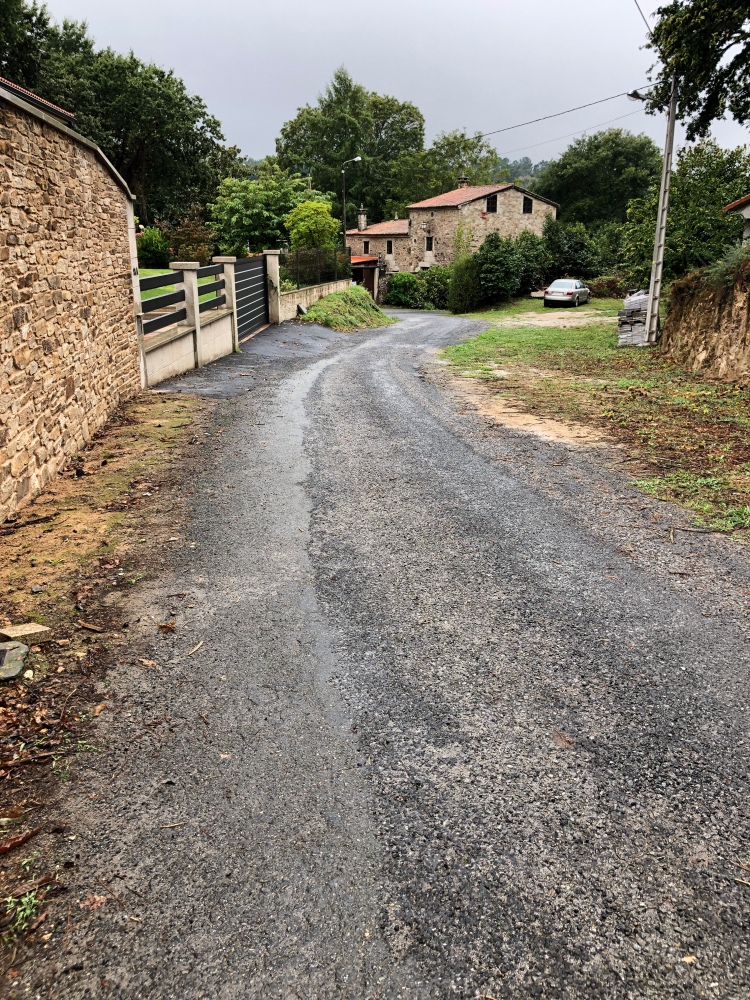 There were a few steep hills today but the view was worth it.

Lunch break — a bocadillo without Terry is like a day without sunshine hahah!

Lunch stop was at a conveniently located hotel with a cafe right on the trail. In the upper left corner of the photo is Merwyn and Debs (not a typo, she called herself Debs with an “s”). We met them a couple days ago. I chatted with them for a bit. They had already crossed paths earlier with Terry who was killing time at the cafe. Merwyn had some foot problems and Terry shared her ibuprofen with him and he was feeling much better. 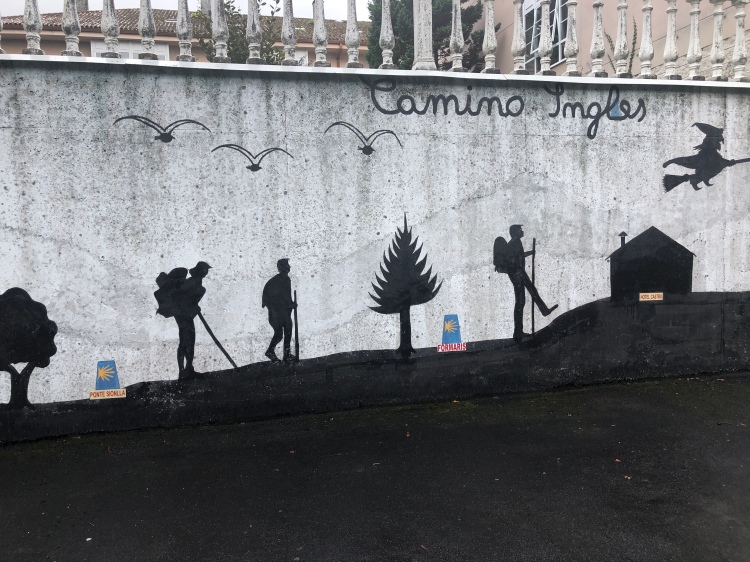 The parking lot wall had a nice camino mural depicting the various stages of Camino Ingles.

The next part of the camino went through the “Enchanted Forest”. 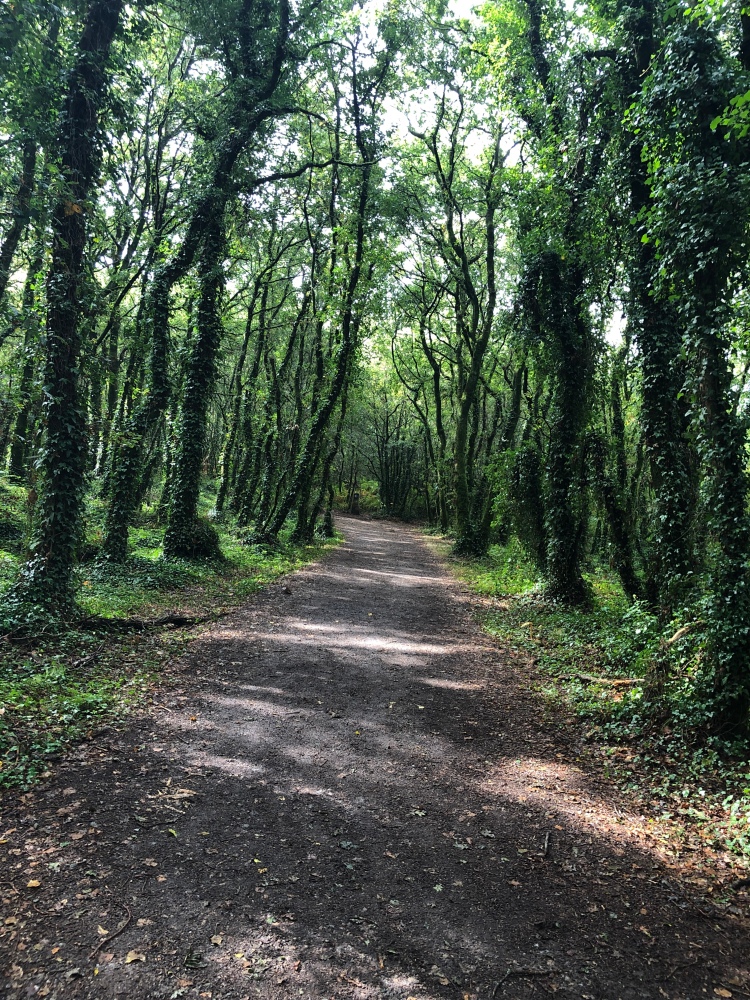 It truly was enchanted. Many of the trees were covered with vines and it was a beautiful walk …

… until I came to the industrial area. Merwyn and Debs took a cab into Santiago from here. They have already walked the Camino once and had no interest in walking through the industrial section. 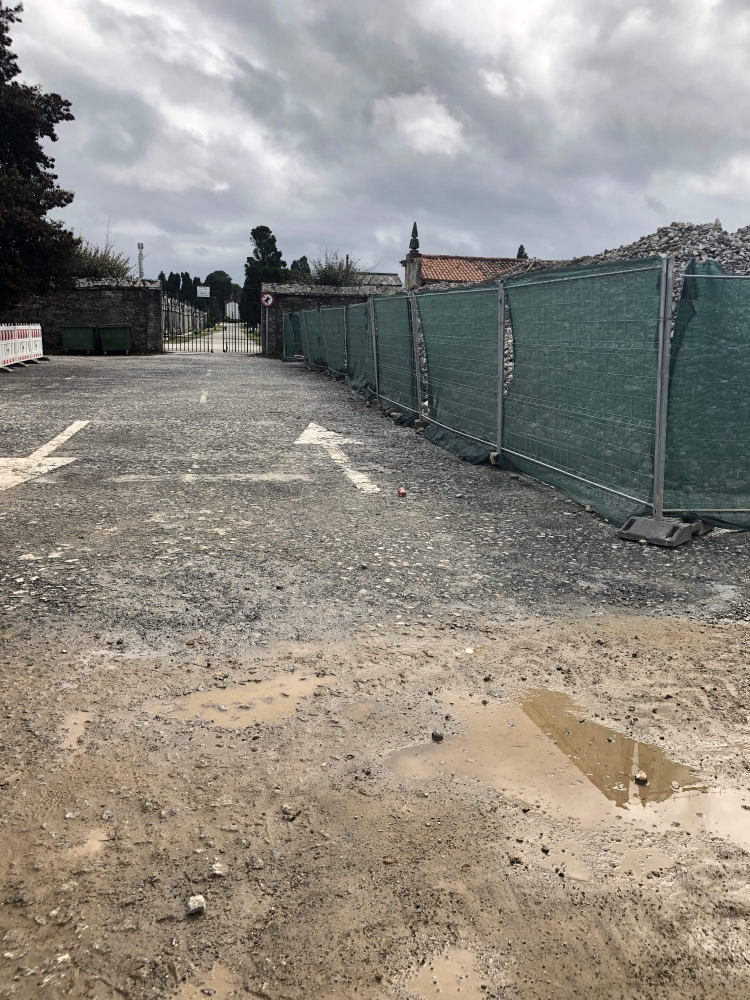 As I approached Santiago, I found the biggest grave yard ever. It was in the industrial area and from the outside looked like a construction site. I didn’t see a church anywhere.

I entered the gate and saw a long stretch of little stone mausoleums. Being a curious person, I needed to take a closer look.

The first mausoleum had a glass door on it. Some interesting artifacts of this person (or family). I wonder what the chicken was about.

Graves as far as the eye could see. It would have been easy to kill some time here but I needed to get moving. I had about 12-13 miles to cover today. 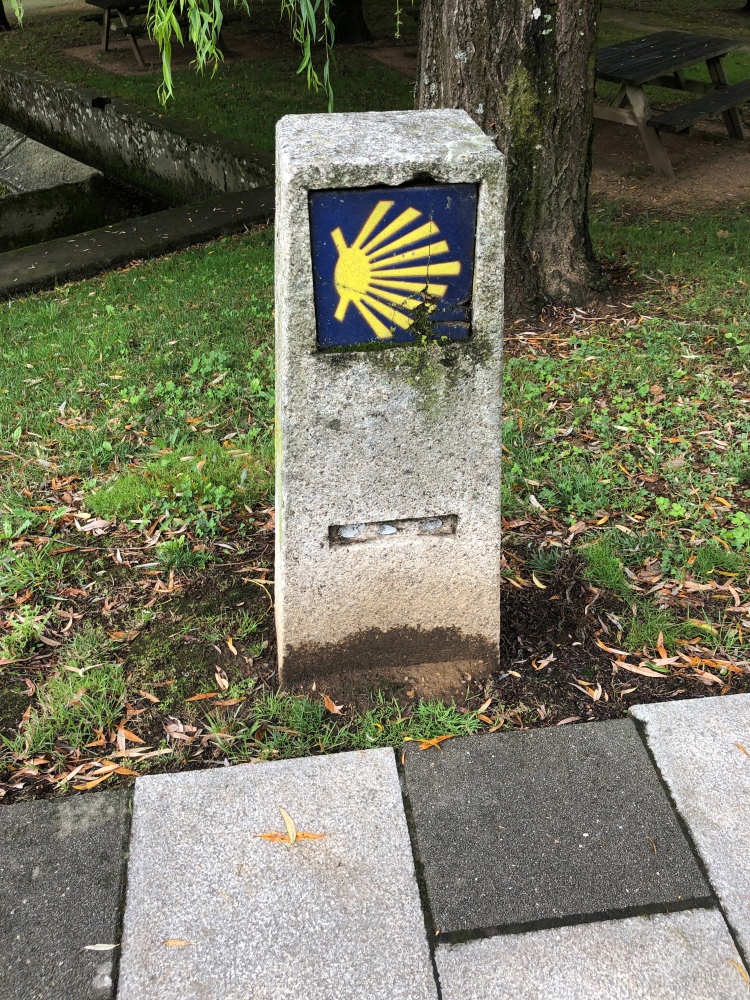 I could tell I was getting close to Santiago because the markers were vandalized. No directional arrow and no distance indicated. People like to take these for souvenirs even though you could buy replica’s in many of the souvenir shops.

It is a treasure hunt to find the yellow arrows. This one is painted on the street lamp and leads down the center of a street. 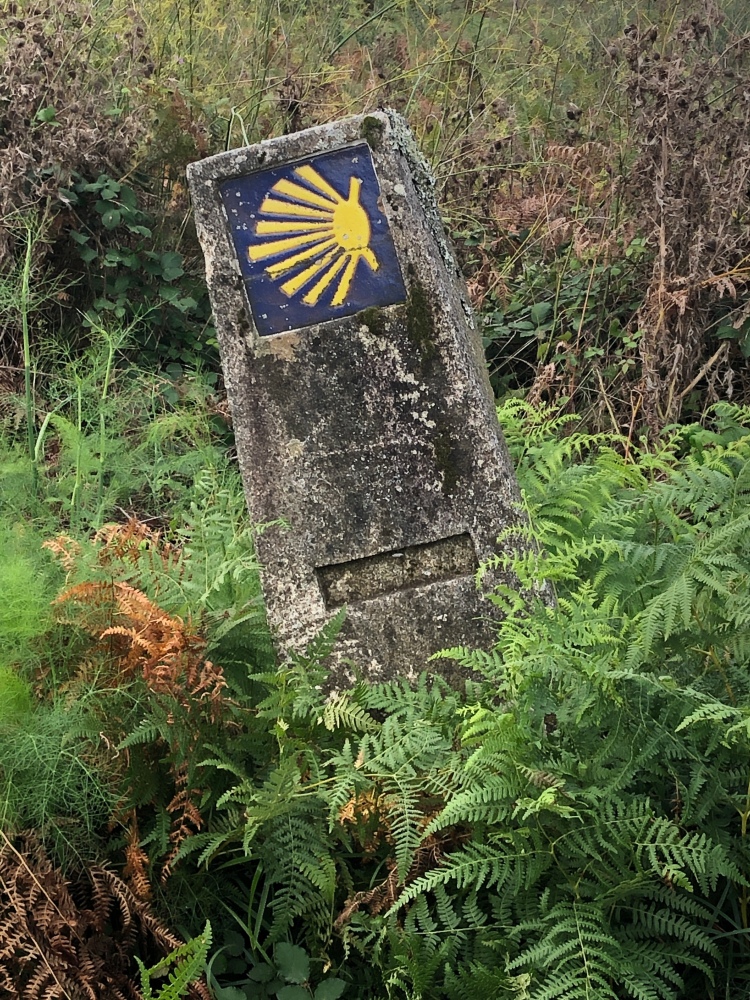 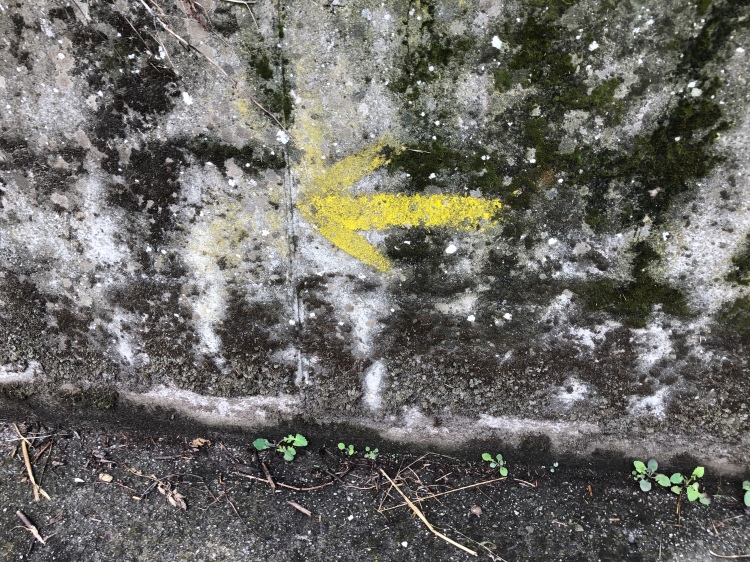 With arrow markers like these, I’m starting to get a little nervous about entering the city. I stopped at a cafe/bar for another stamp and WiFi. I turned on my phone and pulled up a map of my location. 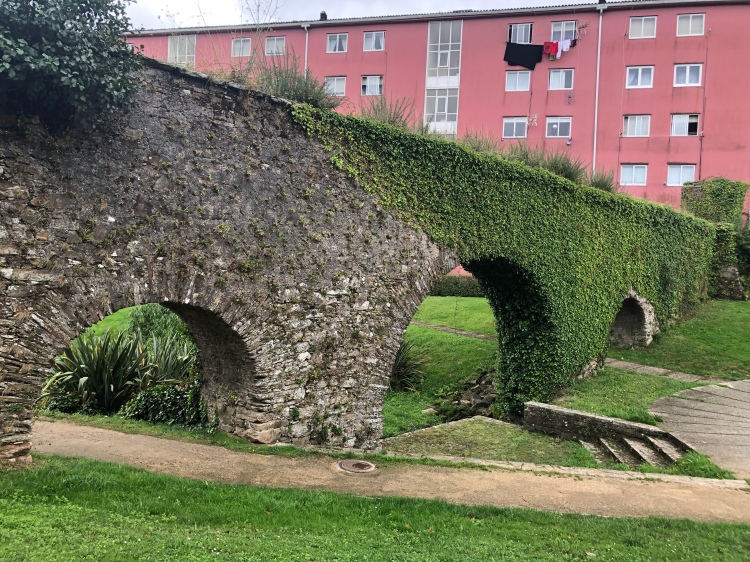 A kind patron of the cafe/bar led me around a truck that was blocking the yellow arrow and he pointed to the direction. I wonder if the locals ever get tired of giving camino directions.

I can see the cathedral and now I’m on the last stretch into the city. Yay!

This is the bagpipe tunnel that leads into Cathedral square. Man on the left in photo is playing the bagpipes. The Frances and Ingles camino meet before the tunnel.

I have arrived at the Cathedral. I’m tired from the many miles covered today. I am happy to see the facade of the cathedral for the first time without scaffolding. I feel sad that Terry isn’t with me.

Many people are celebrating their arrival. I wasn’t in a celebratory mood. Time to move on and find the hotel where Terry is waiting. 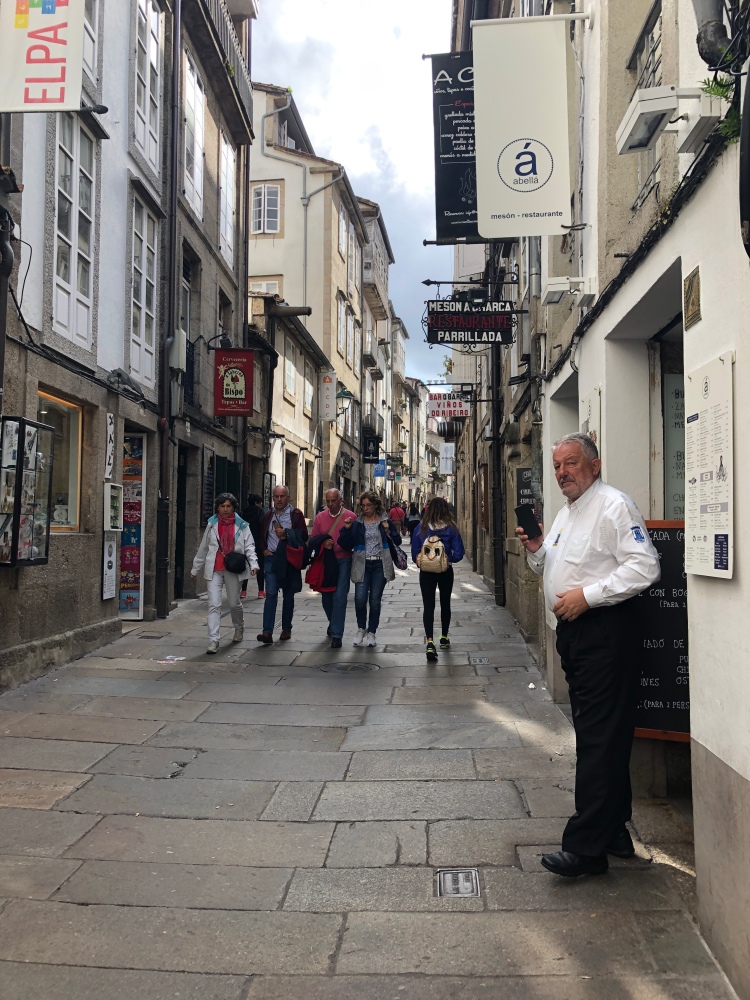 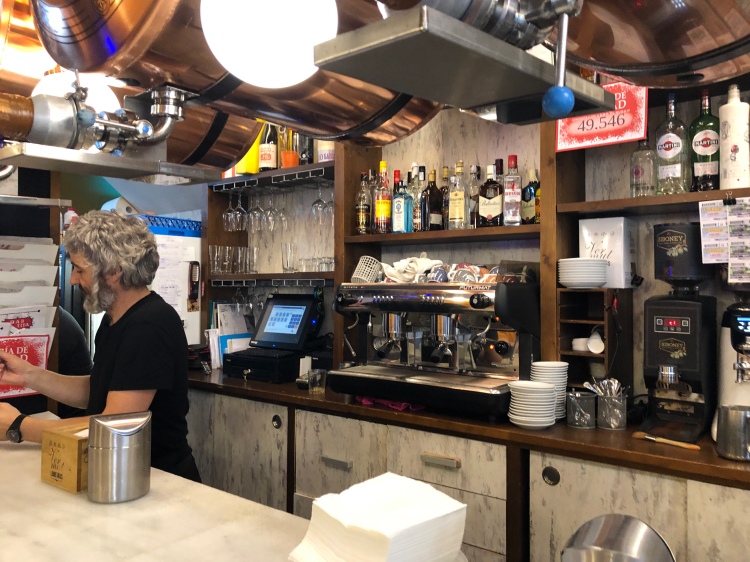 I made my way through the old town streets and found Bar LaTita. With WiFi I texted Terry to let her know I had arrived. A very nice tapa arrived with my beer. It was the specialty of LaTita. It’s called a tortilla but was more like au gratin potatoes. Our room was above the bar …

… exactly five floors above it. The staircase shown here was made of stone. Terry said a kind woman she met in the bar carried her backpack up the stairs for her. 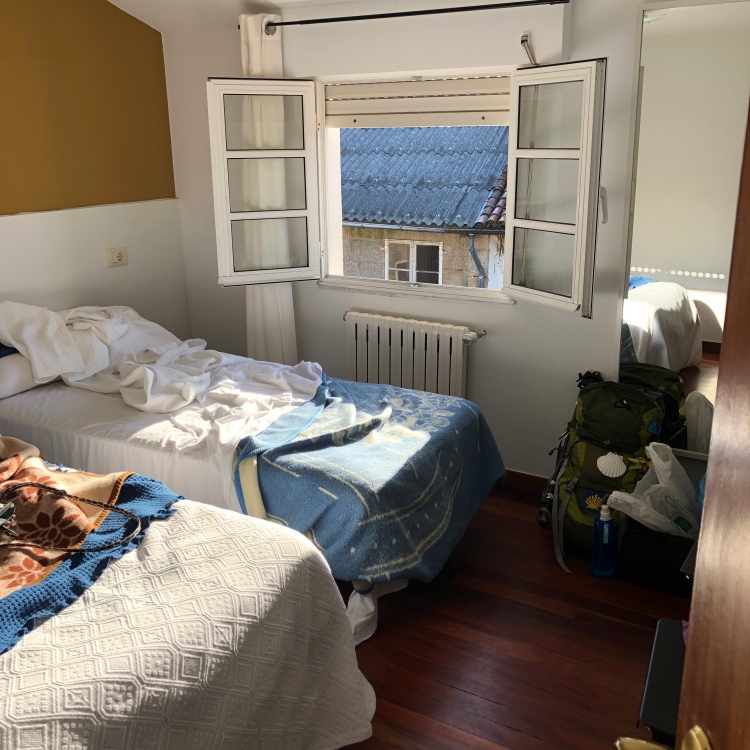 This is our room. It has a view. We shared a bathroom down the hall which was not a problem.

It was a very nice reunion. More tapas. We both made it to Santiago.

Terry crutched back to nearby Cathedral square so we could get the traditional photo in front of the cathedral.

One thought on “Sigüeiro to Santiago”