Saturday morning in Old Town Santiago … charming but it was very noisy at night. Lots of people at the bar below us, street noise, revelers and more. Terry slept in while I scurried off to the Pilgrim Offiice. I wanted to get my Camino Ingles Compostela which is a document written in Latin stating when you started and finished your Camino. There is a second document that verifies the kilometers walked. To some it is just a piece of paper but not mine. When I look at it the feeling of the camino encompasses me and brings me back to Spain.

In the past, we never had a problem getting our Compostela. But that was usually in April or May. We would finish, then go to the Pilgrims’ office and stand in line for a half hour or 45 minutes. Now, at the end of September, there are many more people walking the different caminoes than ever before. They are having record breaking numbers.

Hospedaje La Tita in Old Town Santiago is a charming place to stay but in a very noisy area.

I left at about 8:30 to get my ticket for the Compostela line. The ticket has a QR code that can be scanned with a cell phone camera. It will tell you where you are in the line. People start standing in line at 6:00 am even though its very dark out and the office doesn’t open till 8:00 am.

You must be in the Compostela line when your number is called. They are very strict. If you miss your number, you have to go get another ticket and start waiting all over again.

I wandered around for awhile and went back to our Hotel. We had to be out of our room by 11:00 am, so we grabbed our backpacks and left. Terry, who is still on crutches, had to wear her backpack. We meandered through the streets to the Pilgrims’ office.

Santiago is so full of energy and life. Interesting things everywhere. 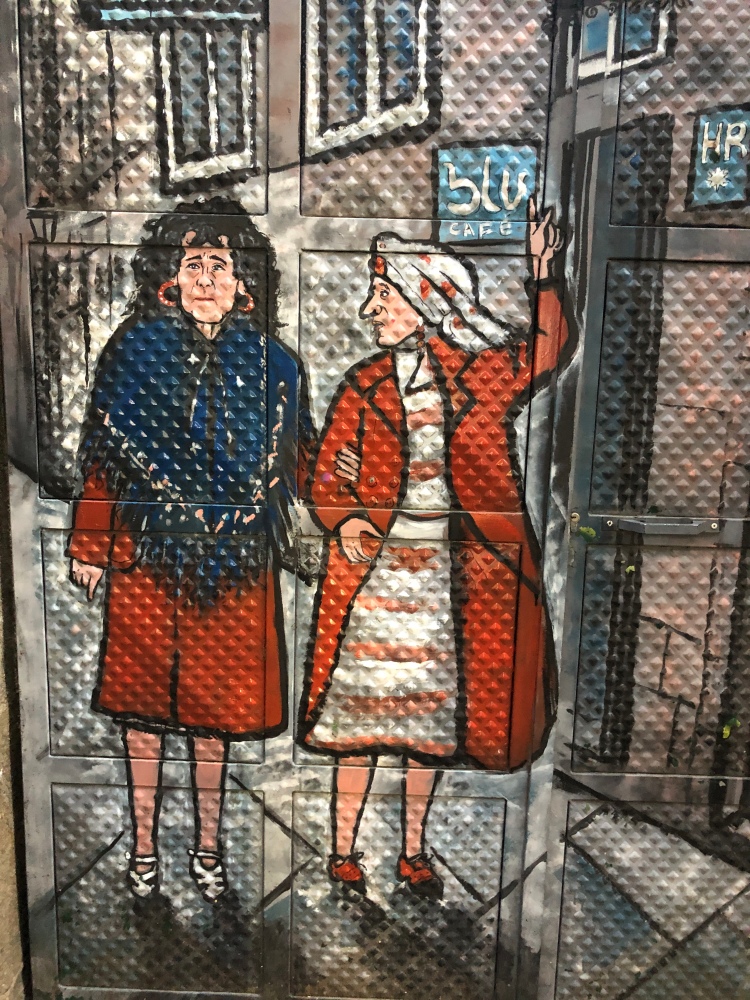 Statues of these two characters can be found in the nearby Mirador Parque da Alameda. 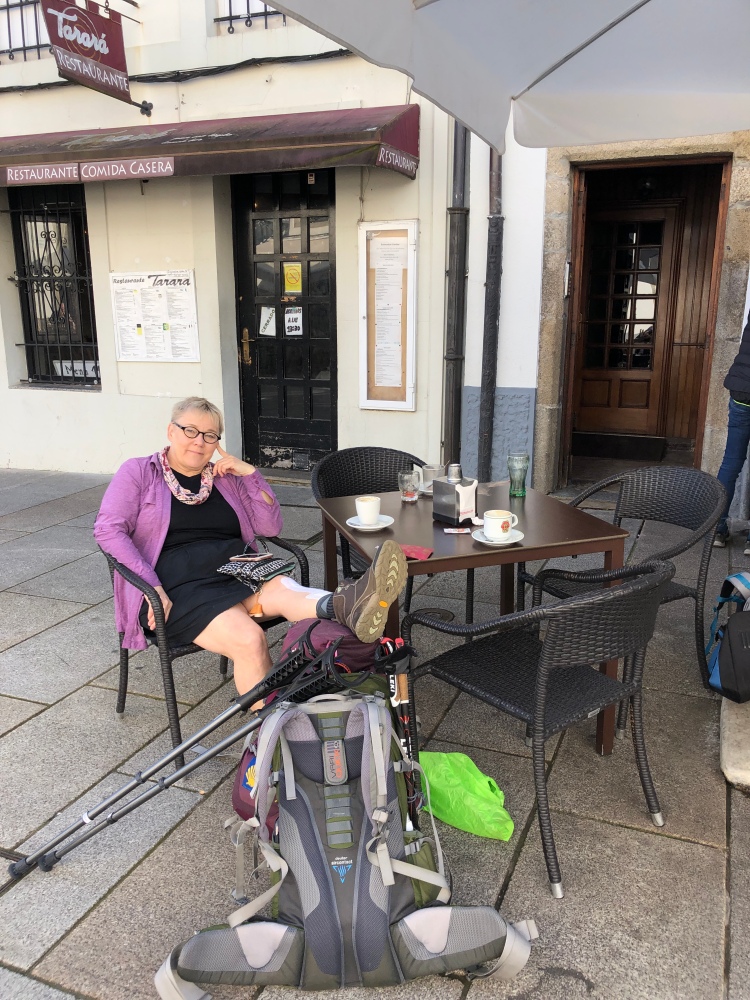 We found a nice cafe near the pilgrim office to wait until my number was called. 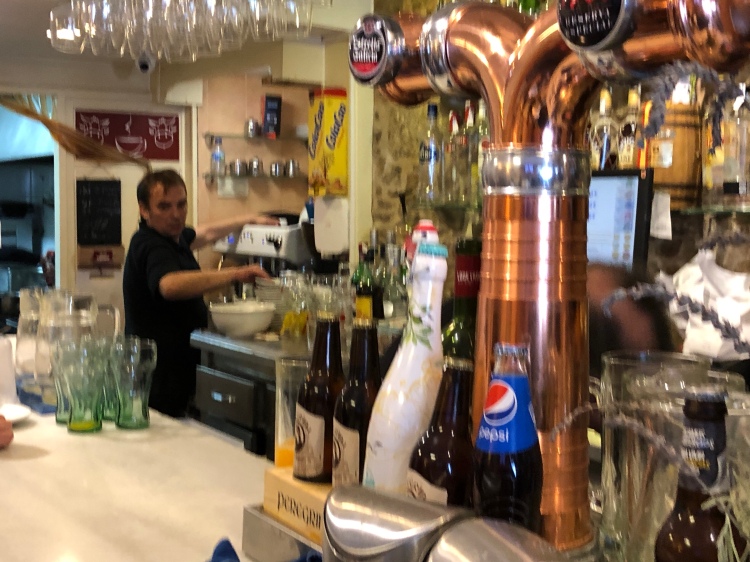 This small cafe is a very busy place with many pilgrims waiting for their numbers. I went in to get coffee, juice or a croissant so many times that the server would laugh when he saw me coming.

Waiting, waiting, waiting. We are leaving for Finnisterre as soon as I get my Compostela. The last bus leaves at 3:30 pm. Hopefully, I will done by then.

When the line got close to my number I went into the office and stood with others who had upcoming numbers. Even though I wasn’t winning the lottery, it was exciting to be a few numbers away from #514.

Finally! Around 1:30 I went to the station indicated on the electronic board and processed my Compostela. You have to present your passport and credential with all of the stamps obtained along the way. A few questions are asked and then they finish the document by writing your name in Latin on it and sealing it with an embossed stamp. The credential is also stamped and sealed as completed. 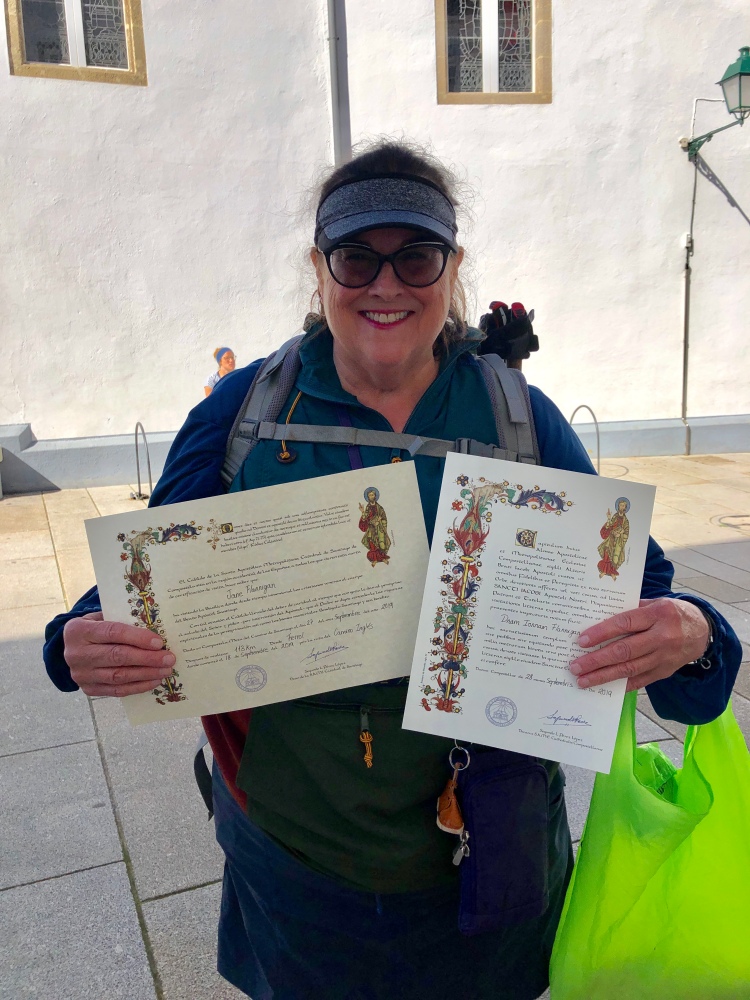 We were waiting for a cab to take us to the bus station when we crossed paths with David from England whom I had met in Siguero. He was pleased to meet the injured Theresa I had talked about in Siguero. 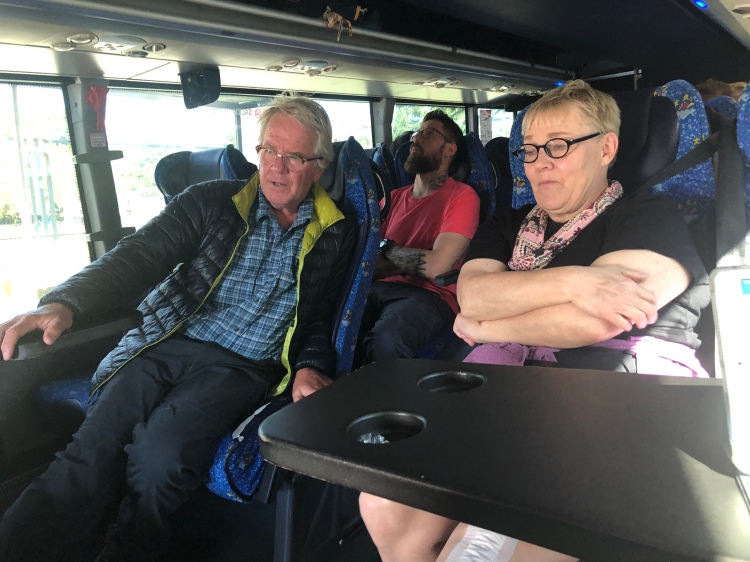 We’re finally on the bus to Finisterre. An interesting man from Chicago sat across from us. His name is Mark and he is a retired film director and he now teaches. 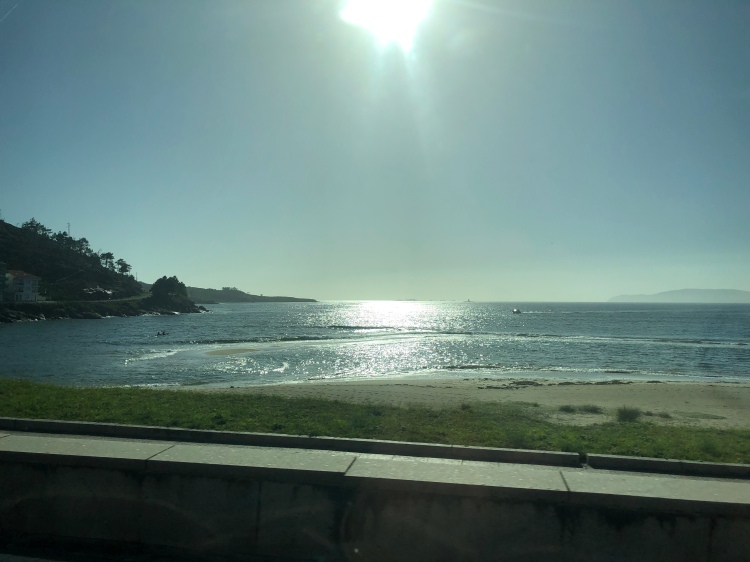 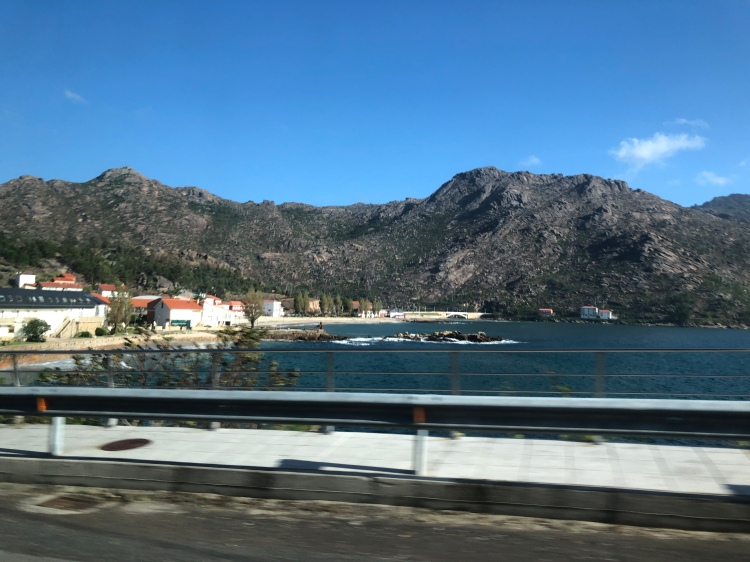 We took the longer “scenic route” bus which goes along the coast to Finisterre. The direct bus in quicker but it’s mostly highway.

Unfortunately, we booked an albuergue several months ago when we didn’t know Terry would be on crutches. We arrived a little bit late and we were lucky they didn’t give our beds away. We got one upper and one lower bunk. It’s always been challenging for me to climb the ladder and maneuver with my new knee especially in the dark at night if I need to use the restroom. I offered to take the top bunk, but Terry refused. 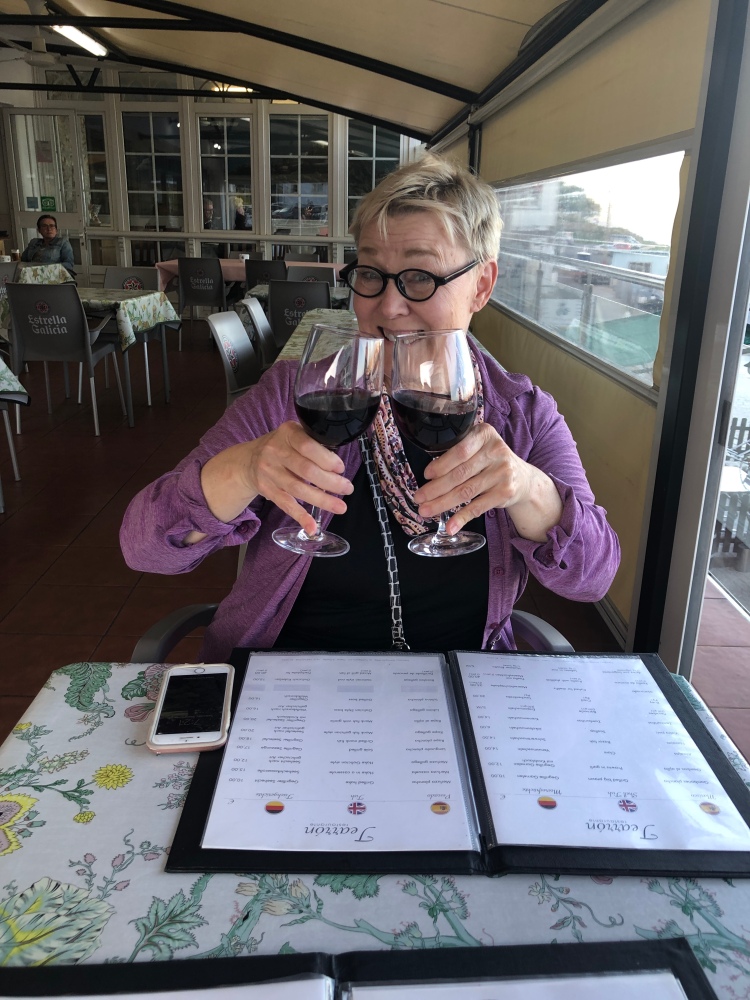 By the time we got to Finisterre, we were very hungry. 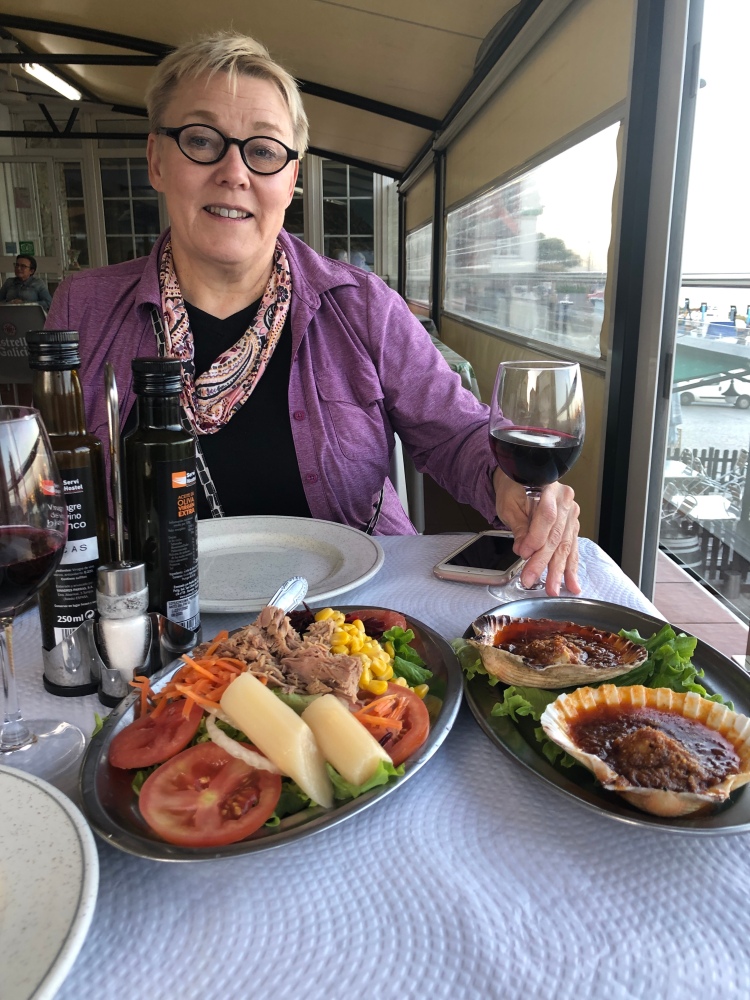 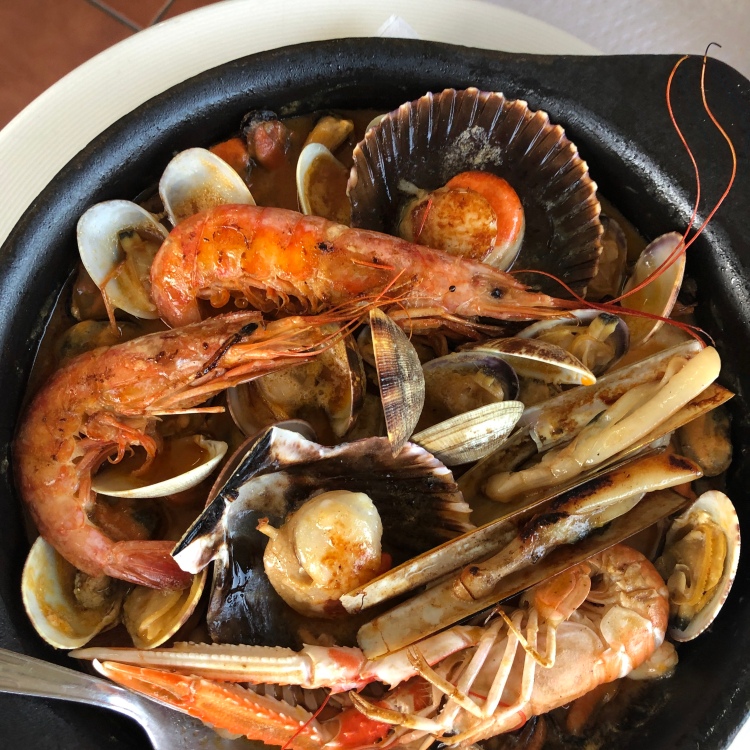 We love the seafood and it’s always good there. We went to our favorite restaurant near the waterfront. The scallops were delicious and the seafood casserole has awesome assortment of delicacies.

Next stop is the lighthouse at the end of Finisterre to watch the sunset.

Part of our tradition is to have a gin & tonic at ‘the end of the earth’ which is what Finisterre is believe to be. 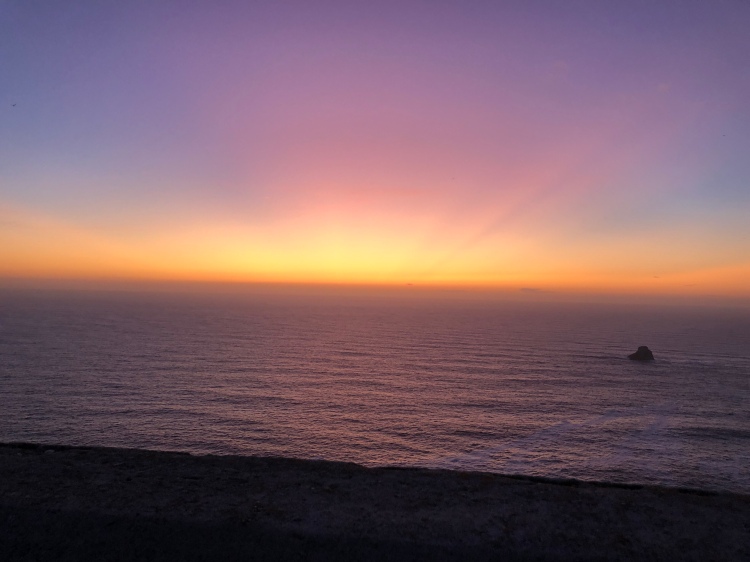 And it was a great sunset and finish to our Camino Ingles adventure.

3 thoughts on “After Camino Ingles: Santiago to Finisterre”