Happy National Spain Day! Today is a national holiday that WHAT?? Commemorates Christopher Columbus?? I guess we still kind of have remnants of that in the US too but they are trying to call it Indigenous People’s day or something like that. We were a little disturbed with the origins of National Spain Day but after some research, we feel that the people of Spain get it about Columbus and are trying to switch it to more of an indigenous day similar to what is being done in the United States. From our observations, it is also a day when they celebrates the Spanish military and those who protect the public. It’s a day that families celebrate together at home but in Ribadiso, it was just like any other day.

Today is a very rainy and cold Saturday morning. As usual, I went over to the Meson Rural to blog. There were only a couple people there and they had the TV on with a typical news type show. The segment I caught showed a line art depiction of a coffin being removed from a floor tomb inside of a big church or cathedral. The line art animation showed the hole where the coffin had been, being filled with cement and covered to match the rest of the floor.

Terry happen to arrive at Meson Rural and I asked her who was being removed from their burial site at a big fancy cathedral. She thought about it for a moment and said it was probably the Spanish dictator Franco. It was controversial because he was buried at the Valley of the Fallen which is a Catholic basilica and a monument memorial. It is a national park north of Madrid where the remains of 40,000 people are registered. Many thought that Franco did not belong there. Also, his followers were becoming a distraction at this sacred place. I’m not sure why they were showing this on National Spain Day but the bartender at Meson Rural assured me it was not part of the Spain Day Festivities.

The next thing that came on TV was the royal family of Spain; King Phillippi the 6th with Queen Letzia and daughters Leonor and Sonja. They took their seats in a special viewing station on the parade route.

The opening highlight of the ceremony was when a paratrooper leaped from a military plane. He parachuted down with a giant spanish flag. It was a beautiful sight … the paratrooper flowing through the air with the Spanish flag until …. splat — he collided with a street lamp. The crowd gasped as did everyone at Meson Rural. 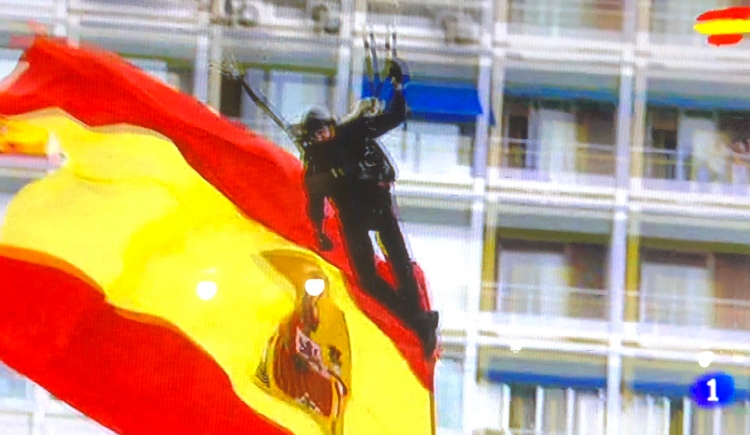 That poor man! They showed him and the flag tangled. He struggled to pull a tool or knife from his gear to free himself. But was unable to do so. The stoic King and Queen did not lose composure. They smiled and clapped politely. I wanted to laugh really hard but I didn’t know who was around me and how they might react.

The paratrooper remained hanging from the light post. The ceremonial ground troops found another giant flag, unfurled it and the show went on. They marched down the street carrying the giant flag that the king would ceremoniously raise on a flagpole. We later saw on an internet news posting that they brought in a cherry picker to get the paratrooper untangled from the street lamp.

After the flag was raised all of the military was on display. The airplanes, the helicopters, the tanks. There was even a military boat on a trailer with it’s crew in place and ready for action. The part we enjoyed the most was when the Guardian Civil rolled through. They had a police dog riding front and center on their vehicle in a place of honor.

What an honor for this police dog to have such a prominent place in the parade.

Eventually, the bar staff shut the TV off and started playing music. Time for us to return to the albuergue. 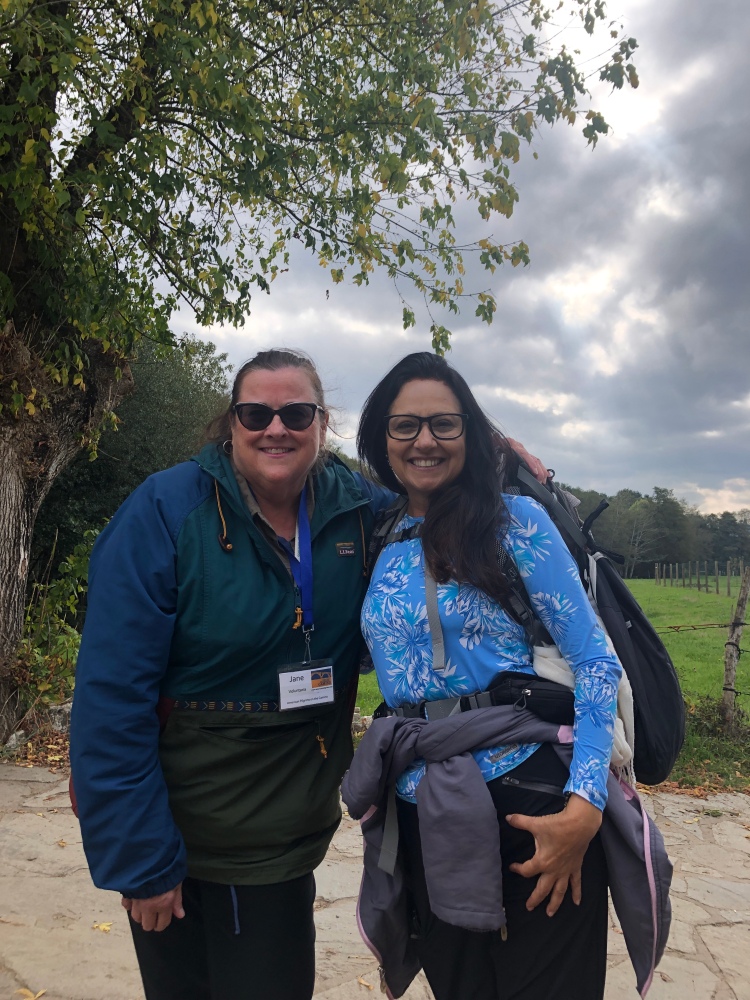 Pilgrim dog had to carry his own supply of dog food.

This is Diego from Matzalan, Mexico who obtained the beet from an English speaking farmer. Diego is a doctor and analyzed Terry’s ankle. Because the pain is still persisting and its coming from the inside of her ankle, there is a possibility of a fracture or break. There is nothing more to do but rest, ice, elevate and have it looked at when she gets home.

Three chicas with matching headbands are from Mexico: Graciella, Alexandra and Dulce (Sugar).

Melissa, Jose, Diego and Quique from various parts of Spain. Very tired and hungry from a long trek today. 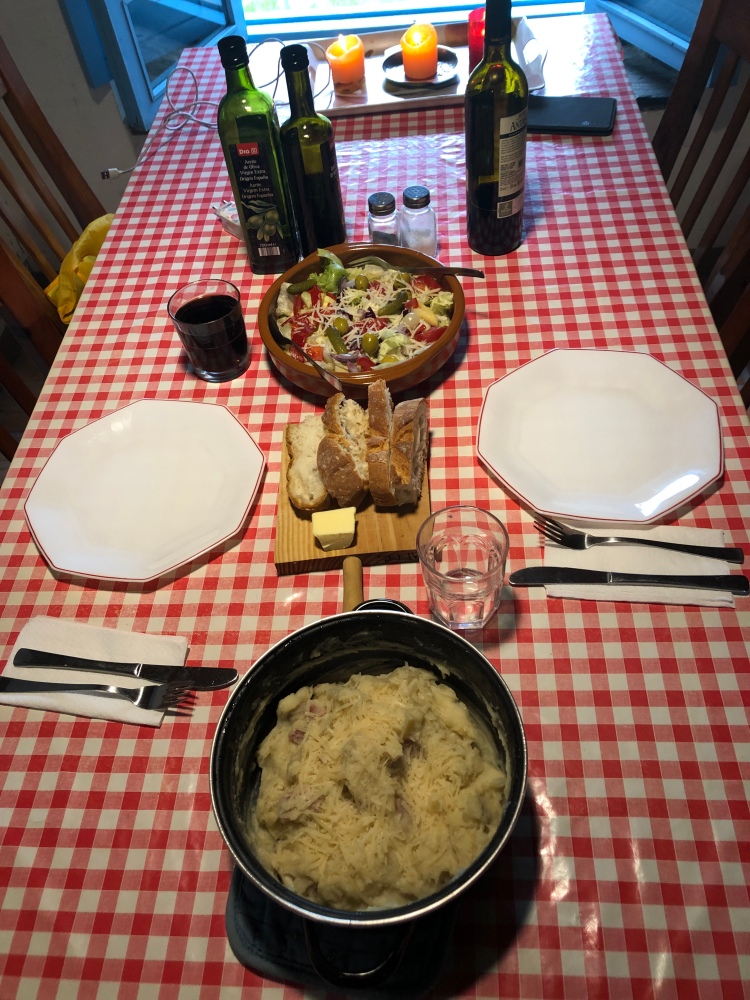 It was a slow Saturday. Less than 30 pilgrims staying at the Albuergue. We retreated to the cottage early. Tonight’s gourmet dinner was a concoction of mashed potatoes, sausage and cheese.

It’s a joy to relax at the table with no worries and to gaze out the window at the green pasture, the rapidly moving river and just ponder whatever comes to mind.